Thank you for all the memories, Brett Lee!

Thank you for all the memories, Brett Lee!

Lee will bid adieu to the game at the end of the ongoing BBL season.

Brett Lee, the former Australian speedster, has announced retirement from all forms of cricket. Lee has been away from international cricket since 2012, but has since been a part of the Kolkata Knight Riders and the Sydney Sixers. Lee will bring down the curtains on his memorable career at the end of the ongoing Big Bash League (BBL) 2014-15. Nishad Pai Vaidya pays tribute to Lee.

Any man would envy Brett Lee. And why not? The Hollywood-like looks when coupled with those thunderbolts made him an instant hit with the female fans. Then you, bring into the picture his musical acumen and there’s the superstar. Lee has always had this likeable aura around him, whether you were an Australian fan or not, there was something about him that drew you towards him. The jovial and smiling face would often mask the ruthless paceman batsmen feared to face. As he calls time on his cricketing career, one can say that the fans will miss that smiling assassin who often brought life to a game, not only with his bowling but also his persona.

Lee has been away from international cricket since 2012 and has only played T20 cricket since. Back then, it was quite a sad end to his international career as he hobbled off the field with an injury during a One-Day International (ODI) against England in Durham. The injuries have been huge hurdles during a long international career. Lee has had to fight it out, bide his time and wait for a comeback. His Test career also ended in similar circumstances. Though he tried to get back, his body gave way again.

But, for characters like Lee, you hope for a good finish. In that way, T20 cricket has been kind and allowed the pacer some more time to play the game he loves. In 2013, he began the Indian Premier League (IPL) with a wicket off the first ball. That year, he seemed that youthful mentor to a brigade of fast bowlers that looked up to him. Lee has been an extremely popular figure in India, but sadly, he hasn’t played in the country since the IPL 2013. His appearances have been restricted to the Sydney Sixers in the Big Bash League (BBL).

At the age of 38, Lee calls time on what has been a memorable career. The sight of him running in with a rhythmic run-up, that jump at the bowling crease and the thunderbolt that shattered the stumps would be sorely missed. He was always a more threatening bowler in limited-overs cricket, where his statistics are fantastic. There would be many moments one would associate with him — the successful run at the 2003 World Cup, the Ashes 2005, but there was always that cheer from the crowd that stood out. Even when he was a 12th man during the 2004 tour to India, the crowd would unfailingly give him a reception when he walked out with the drinks. That was his appeal.

As he heads into retirement, one would pray for a fairytale finish for a genuinely likeable cricketer. Lee is hoping to win the BBL 2014-15 for the Sixers. As the days are numbered and the countdown to his final appearance begins, one prays for the sight of him smashing down the stumps and perhaps glowing in the sunshine of victory. Thank you, Brett Lee for all the memories! 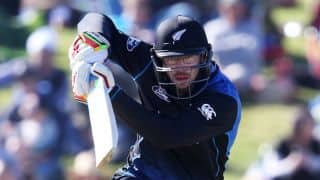 New Zealand vs Sri Lanka 2014-15: Daniel Vettori run out for 5 by Jeevan Mendis