The best way to do that is, of course, for the Blackcaps to keep winning and it is important they do not see this tournament as an end in itself but, instead, the start of something even better.

For cricket to claim its place in a Rugby-crazy country, it is important that the post-World Cup euphoria is built upon. In assessing what the run of Brendon McCullum’s side to the final of the World Cup means, one thing is undeniable: it has given cricket in New Zealand a massive shot in the arm.

It is the water-cooler conversation the length and breadth of the country and in a land where rugby union is the number one sporting religion that is some achievement. It has created a euphoria and an awareness of cricket that has not existed in New Zealand since 1992 but now it is important that the legacy – yes, that word that always seems to crop up at the end of major sporting events – is built upon.

The best way to do that is, of course, for the Blackcaps to keep winning and it is important they do not see this tournament as an end in itself but, instead, the start of something even better. That should be achievable, but one thing you know is that there will be change around the squad – that always happens at the end of a four-year period that ends with a World Cup. And the form that change takes will have a major bearing on what happens next.

There seems little doubt that Daniel Vettori will exit the stage, together with the grateful thanks of a nation for his two decades of service, and Kyle Mills is likely to do the same. But what about the man credited with driving much of what has gone right – Brendon McCullum? It is an intriguing question.

The captain is 33 year of age – the same age as Michael Clarke, albeit without the same injury history – and there is no doubt he has plenty to ponder. He has an Indian Premier League contract to fulfil next, followed by a tour of England, the possibility (according to the Future Tours Programme) of limited-overs matches in Zimbabwe and South Africa and, at the end of the year, a tour to Australia. And then, if he is still fit and in form, there is the prospect of a 100th Test appearance during the next home summer – again against Australia – before the ICC World Twenty20 in India.

I hope he opts to carry on in charge of the side across all formats for the foreseeable future. He has lifted the Blackcaps up by their bootstraps – remember the first match after he was appointed Test captain saw the side bowled out for 45 against South Africa in Cape Town – and he ended the World Cup with his position water-tight.

He is a positive leader who leads by example and although Kane Williamson is regarded as the next cab off the rank in terms of captaincy, it would be ideal if McCullum stayed on to continue the work he and coach Mike Hesson have begun, at least until the end of that ICC World Twenty20 at the earliest.

We have to hope the team’s success and the fact its profile has now grown in a major way will provide New Zealand Cricket’s (NZC) administrators with more clout around negotiating future commitments for the national side.

I say that because there is no doubt our relationship with our nearest neighbour Australia has got out of kilter. We simply have not been playing them often enough and although we have those home and away Test series against them next summer and I understand there is talk of more Chappell-Hadlee matches in the future, it is a situation that longer term needs to change.

The ideal would be for the World Cup to be a starting point for a renewed on-field rivalry, much as was the case for Australia and South Africa following their matches in the 1999 tournament, but the best way for New Zealand to make the case for more matches against the higher-profile sides more often is to keep winning. Nothing succeeds like success.

And that can have spin-offs for the players, too, not just in more and more high-profile international cricket but also, if they perform well, with lucrative contracts in the Indian Premier League or the Caribbean Premier League, for example.

Opportunities like those are important not just for the players but also for NZC too as they can serve the duel purpose of offering players exposure to different conditions and high-quality opponents while at the same time ensuring those players are also financially secure.

And that is important because although NZC is in a sound financial position it is no India, England or Australia in terms of the size of its cheque book, but another positive spin-off of the World Cup run could be the possibilities it opens up for greater commercial opportunities, both at home but also, significantly, abroad.

The country’s time zone in relation to the rest of the cricket world means, for home series at least, the New Zealand side will always have to battle to draw decent revenue for television rights, but New Zealand are now recognised as being box-office and a brand that people want to watch. They have become the neutral’s favourite team. If they can keep performing then that will allow NZC’s commercial team to pick up the ball and run with it, especially for away series, because there is a now a real global awareness of what the team offers.

As for the wider implications of the World Cup and what it means for the One-Day International game, the format appears much more secure than it was, say, two years ago when there seemed to be a view it would wither in the face of Twenty20.

The high scores in the tournament have already inevitably led to calls to try and recalibrate the balance between bat and ball, perhaps with a return to allowing an extra fielder outside the circle and the use of just one ball per innings, something that might foster greater opportunities for spinners and reverse swing.

My own view is that the jury is still out on those ideas. Yes, batsmen are scoring freely but you should also remember that high-quality bowlers still thrived and aggressive captaincy by the likes of McCullum and Clarke was rewarded.

Pitches are also a factor and there is nothing wrong in producing surfaces that have something in them for the bowler. Low-scoring matches where the ball dominates the bat can be crackers and the New Zealand – Australia encounter at Eden Park was one of the games of the tournament.

Before the game makes any knee-jerk reactions to change the format back to the way it was, I would like to see whether other captains embrace the need to be positive and try and take wickets to ensure the opposition cannot get to the 35-over mark with the potential to explode. In the meantime, keep talking and monitoring the situation but let us give it until the end of the year at least.

In the meantime, we can all enjoy the rosy glow of a tournament that has exceeded expectations and made people all around the world – and in New Zealand in particular – fall in love with cricket all over again. 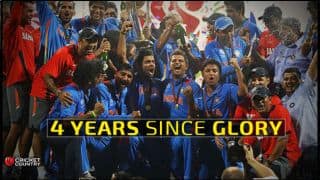