While Kohli and Smith will have worries and challenges to improve their sides, Root and Williamson will get time and space.

Virat Kohli will face a humongous challenge when he will lead out his team against Sri Lanka in the opening Test against Sri Lanka at Galle on August 12. Kohli will be playing his first full series as captain, which also happens to be his maiden Test series against Sri Lanka. On the other hand, Steven Smith is, in all likeliness, Australia’s next captain in a few days. His test will begin in October with their tour of Bangladesh. However, their rival in the English and Kiwi camps, Joe Root and Kane Williamson, will continue to flourish under the leadership of Alastair Cook and Brendon McCullum. Devarchit Varma throws light on the advantage which the Englishman enjoys over his competitors.

Who is the best young batsman at the moment? Is it Kohli or Smith or Root or Williamson? While the cricket fraternity remains divided in their choices, they also remain celebrate the young talent that has blessed the beloved game. Certainly, the future of batting for the next decade or so will revolve a lot around how these four shape up. But batting is not all that they do. ALSO READ: Virat Kohli’s trial by fire as Test captain begins with tour of Sri Lanka

Come Wednesday, Kohli will finally begin his era as the leader of Indian cricket. He takes charge of a team that has massive potential, but has its own share of shortcomings and frailties. Kohli is bold, aggressive and a visionary. He wants India to play for win, not merely to keep learning and concentrate on the right processes. Under Kohli, India will play five specialist bowlers in Tests in subcontinent. The bowlers will also be expected to chip in with runs — not sporadically but habitually. Kohli wants India to play a brand of cricket they would not have dared of under MS Dhoni. That is why Kohli is ‘aggressive’. ALSO READ: India vs Sri Lanka 2015: Virat Kohli’s captaincy will steer a new beginning

But will it pay dividends? Will India cease to become a wimp? Will the Indian warriors stand tall and change the way they approach their cricket? Only time will tell. The two series against Sri Lanka and South Africa (at home) will tell him and the world to what extent the men under him can raise the bar and meet his expectations. Kohli will have a very good idea about whether his team can play differently, or will he be required to change the approach.

Smith will lead Australia’s rejuvenation. There will be no Michael Clarke, Brad Haddin or Chris Rogers. There may not be a few more men who played alongside him in Ashes 2015. He will be expected to lead from the front and score as prolifically as he has done over the last two years or so, and at the same time, change the face of Australian cricket. Smith’s challenge will not just be confined to providing Australia with direction and stability in their batting order, but also to ensure that embarrassments like the recent one in England just four months after their win in ICC Cricket World Cup 2015.

Smith may get a very young side at his disposal. He will be required to nurture them, show them the path to success, fulfil his promise of being aggressive, improve Australia’s overseas record, and at the same time, maintain his stature as batsman. It will not be an easy ride for him; his team, after all, is going through a major low.

Amid all this, Root sits pretty in the English camp. He has made merry at home (seven of his eight Test hundreds have come on English soil). He continues to flourish in familiar conditions, and has yet not attracted the ‘flat track bully’ tag — something pundits have already bestowed upon Kohli and Smith. Though both men have performed overseas, a single failure sparks the debate of Kohli and Smith being ‘flat track bullies’. England have dished out flat decks more frequently than they have prepared the typical ‘English’ wickets, and Root has made most of the opportunity.

Ashes 2015 has also given a new lease of life to Cook. Anticipating another defeat, the twitchy English media had already begun writing eulogies to Cook’s career as a captain. But Cook will stay on. Root has urged him to do so, as has James Anderson. Cook will go on for some time now, which will give Root some more time to improve as a batsman. Root was named vice-captain before Ashes 2015, and it Andrew Strauss and co. are not likely to take that away.

Williamson’s case, on the other hand, has been different. He has seldom got going on the tougher tours (Australia, England, South Africa or India), but has made merry at home against most oppositions. Like Root, Williamson, too, does not have to bear the brunt of leading the side. He is deputy to Brendon McCullum, who is likely to stay on for long as well.

While Kohli and Smith will have worries and challenges to improve their sides and help them find feet, Root and Williamson will get time and space to prepare themselves for the role. They certainly enjoy an advantage over the other two. Varun Aaron gets Kaushal Silva out in India vs Sri Lanka 2015, 1st Test at Galle 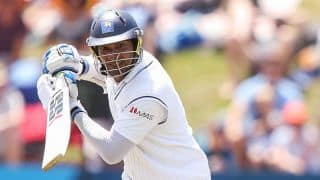