Under the looming and deathly shadows of massacre and mayhem, Major Booth and Alonzo Drake completed a miraculous week in West Country, bowling unchanged in four innings as Yorkshire routed Gloucestershire and Somerset.

August 28, 1914. Two months since the assassination of Archduke Franz Ferdinand. On this day the Great War completed a bloody and morbid month. Under the looming and deathly shadows of massacre and mayhem, Major Booth and Alonzo Drake completed a miraculous week in West Country, bowling unchanged in four innings as Yorkshire routed Gloucestershire and Somerset. Arunabha Sengupta looks back at the last hurrah of this pair touted as the future of Yorkshire cricket. A future that never materialised. READ: Alonzo Drake bowls unchanged throughout the match to finish with figures of 15 for 51

On Sunday, the 2nd of August, Germany invaded Luxembourg.

The following day dawned with The Fatherland declaring War on France, and Switzerland laying the foundations of her modern history by professing neutrality.

That Monday was the start of the Bank Holiday week. Crowds still flocked in to the grounds in England. Undeterred by the roaring guns in Europe, Jack Hobbs scored 226 against Nottinghamshire at The Oval.

At Edgbaston young Percy Jeeves, who had so impressed PG Wodehouse with his bowling at the Cheltenham College Ground, captured 7 for 52 against Worcestershire.

Yet, it was apparent that all was not well.

On that very day, Lancashire captain Albert (son of AN ‘Monkey’) Hornby was called away from Old Trafford to advise the War Office.

On Tuesday, August 4, Nottinghamshire skipper, the inimitable Arthur Carr, received a telegram to report to the 5th Lancers in Dublin. “I’ll have my innings first,” he remarked and struck 30 before leaving to serve King and Country.

The same fate descended on Aubrey Sharp, the Leicestershire amateur engaged in a tussle with Northamptonshire. His departure halfway through the match cost his side dear, as they were defeated by 4 runs.  Plum Warner, captain of Middlesex, was called away as well. As was Archibald White, the skipper of Yorkshire.Great Britain declared War on Germany on the same day, at 11PM. READ: Yorkshire denies Geoff Boycott a chance to make comeback

Through the roar of the guns in Europe, cricket continued to be played in England.

Five days later, as Austria-Hungary declared war on Belgium, Kent’s champion left-arm spinner Colin Blythe captured 7 for 20 against Worcestershire at Canterbury. By now the crowds were dwindling in the cricket matches. The newspapers had scarce space for the deeds of the men in flannels.

On August 24, the War saw the start of the Great Retreat to Marne. And a depleted Yorkshire side reached the Ashley Down Ground in Bristol, for the start of their West Country week.

Alonzo Drake, a heavy-smoking talented forward in the football league, had played 95 times for Sheffield United and 36 times for Doncaster Rovers. By 1909 he had broken into the Yorkshire side as a left-handed all-rounder. By 1913 he had peaked in cricket. He opened the bowling with his left-arm slow medium pace.

Sharing the new ball with him was the right arm fast medium bowler Major Booth. Major was his first name, quite ominous for his era. He had played two Tests in the South African tour of 1913-14.

Booth captured 6 for 48, Drake 4 for 41. Gloucestershire were bowled out for 94. Bowlers of the stature of George Hirst and Wilfred Rhodes did not need to roll their arms over. It was the first time in four years that a Yorkshire pair had dismissed the opposition bowling unchanged. Well, Drake and Booth were just warming up. READ: When WG Grace fielded for Sussex against Gloucestershire

And then Benjamin Wilson drove powerfully for his 56. Booth, a useful batsman as well, opened the innings to score 31. Roy Kilner, knowing that he was unlikely to get a bowl in the match, decided to make the most of his time at the wicket. He cracked his drives, hit strongly through the leg side and was 101 not out by the end of the day.

On the next day, August 25, Lord Kitchener informed the House of Lords that the second army to be deployed in Belgium needed to number 600,000. That same day, Geoffrey Davies of Essex, a Cambridge undergraduate, struck a hundred in 81 minutes against Northamptonshire at Leyton.

On August 27, heavy fighting was witnessed in Le Cateau, Gnila Lipa and Komarow in the Battle of Lemberg, Étreux and Tsingtao.

The Yorkshire team moved on to Clarence Park, Weston-super-Mare, to take on the other West Country side Somerset.

The previous season, Yorkshire had trounced Somerset by an innings and Drake had finished with incredible match figures of 10.4-5-7-7. His analysis was 4 for 4 in the first innings, and 3 for 3 in the second. Now, as rain swept across the newly laid pitch he licked his lips at the prospect of the contest at Weston-super-Mare festival. Besides, Somerset was slightly affected by the conflict. War had so depleted Jack ‘Farmer’ White’s farm of men and horses that he was unable to leave Stogumber. READ: Somerset County Cricket Club to host international matches after 2 years

With the amateurs called away, George Hirst took over as captain. And Yorkshire fielded a team of 11 professionals.

Heavy overnight rain left the Somerset batsmen on the worst wicket they had come across in many a day. Yet, they could hardly complain as it was Yorkshire who had the first strike.

David Denton hit 52 and Drake, this time enjoying himself with the bat, pummelled 51. Yorkshire did well to reach 162.

By the end of the day, Hirst and Rhodes were at the crease and Yorkshire were 59 for 4 in the second innings.

Friday, August 28. The Royal Navy won the First Battle of Heligoland Bight, North Sea. At Weston-Super-Mare, Rhodes fought his way to top-score with 25. A total of 112 meant Somerset needed 231 to win.

In three innings so far in the week, Booth had captured 17 wickets, Drake 13. It was time for the latter to make amends. He did more than that.

They bowled unchanged yet again, Booth 9 overs, Drake 8 overs and 5 balls. But this time it was Drake who took the wickets. All of them.

Tail-ender John Harcombe still had the temerity to hit him for 11 in an over, before losing his stumps to the bowler. It was largely due to the 26 by Harcombe and his 37-run ninth wicket partnership with Phil Hope that Somerset reached 90. Drake had 10 for 35, the first Yorkshire bowler to capture all in an innings.

Booth was 27, Drake 30. The future of Yorkshire cricket.

Yes, in a perfect world.

Fall of wickets in the Greater Game

Saturday, August 29. Temple Gardens, London, witnessed Field Marshal Lord Roberts inspecting a battalion of Royal Fusiliers. “I respect and honour you,” he voiced. “… how different is your action to that of the men who can still go on with their cricket and football, as if the very existence of the country was not at stake! This is not the time to play games, wholesome as they are in days of piping peace.”

“No Time for Games” became the slogan. “To golfers, cricketers, footballers under 50, be men, drop your playthings, drill with rifles,” declared handbills.

A confused, jaded and vastly aged WG Grace called for an end to county cricket.

Of the heroes we have covered in the above lines, Davies was the first to fall. He was killed in the Battle of Loos in September, 1915.

Percy Jeeves died in July, 1916, in High Wood near Montauban-de-Picardie, during the Battle of the Somme.

Sergeant Colin Blythe succumbed to random shell-fire on the railway between Pimmern and Forest Hall near Passchendaele in November, 1917.

Of the Yorkshire duo who bowled unchanged through the week, Major Booth died on the first day of the Somme Offensive in July, 1916. He had risen to the rank of Second Lieutenant.

Alonzo Drake was rejected by the army twice on grounds of fitness. Strange for an accomplished footballer and cricketer at the top level. But he was, as mentioned earlier, a heavy smoker. He died of heart attack at the age of 34 in February, 1919. 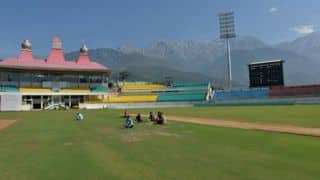