Stuart Broad tweeted few hours back saying, “The talking stops, the action starts.” Ever since England reached Australia, former (and current) Australian players have greeted them with several ‘off-field banters’. Surely, sledging will hold significance in Ashes 2017-18. However, keeping the trash talk aside, let us analyse the keenly-awaited contests between bat and ball ahead of the first Test in our section named key clashes

When two consistent performers clash, it boils down to who will blink, or err, first. The former English captain will provide the impetus at the top, and will be challenged by Hazlewood’s consistency. While Cook can bat for hours, Hazlewood can maintain discipline (i.e. bowling in the right channels) for sessions and compliment Mitchell Starc and Pat Cummins.

Cook is vulnerable outside off stump at the start of innings, and a seasoned campaigner like Hazlewood will like to deceive him in that region. If the left-hander departs early, it will be a humongous task for Joe Root to bat alongside inexperienced duo of Mark Stoneman and Dawid Malan.

Undoubtedly, it can be adjudged clash of the titans. Anderson is expected to churn out wickets at regular junctures, whereas Smith rarely falls short of runs. In short, the two cannot be left out from the match at any point, and their respective showings will determine which side will hold edge at The Gabba, Brisbane.

Did You Know: Smith was the leading run-scorer in Ashes 2015. Anderson couldn’t dismiss him even for once.

Mitchell Johnson starred with both bat and ball when Australia hosted England in the series opener of Ashes 2013-14. His 9-wicket haul and a vital 64 trounced England by 381 runs. A similar such performance is expected by his prot g Starc. The left-arm pacer is in full flow, and recently became the first bowler to claim two hat-tricks in a Sheffield Shield encounter. If he can replicate Johnson and cause enough ruckus in the English batting lineup, it will set up the series nicely for hosts.

Nonetheless, it all comes down to ‘if‘. If Starc under-performs, it will be a psychological advantage for England going ahead. The burden of expectations can rattle the 27-year-old and push him on the back foot. Also, he will have to be wary of not going overboard in the series opener of a grueling series.

Did You Know: Johnson was Man-of-the-Match thrice in the 2013-14 series. Later, he also earned the Player-of-the-Series award.

Root has led in only 7 matches so far. Under Smith’s leadership, Australia lost the Border-Gavaskar 2016-17 versus India (1-2), managed to draw in Bangladesh and were defeated by South Africa at home last summer. Nonetheless, both the players know the value of winning the urn in their maiden Ashes series as captain. Such is the stature of the series, especially for both teams, that it can make or break any player, or skipper.

Smith and Root will form the fulcrum of their respective lineups, handle the bowling changes, make tough calls amidst several on-field ‘distractions’. It will be a test of character and leadership skills.

Broad has a knack of finding the edges off left-handers at regular intervals. Out of 1o8 dismissals of left-handed batsmen, he has found the nicks on 79 occasions (55 caught by fielders and 24 caught by wicketkeepers). Warner will be on his toes against the right-arm pacer.

On the other hand, the Australian vice-captain has a splendid record of scoring big in the first Tests of Australian summers since 2013-14. 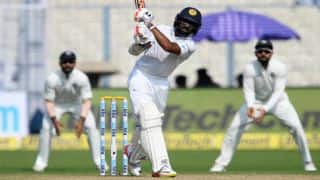 Niroshan Dickwella on banter with Virat Kohli, Mohammed Shami: I won the battle 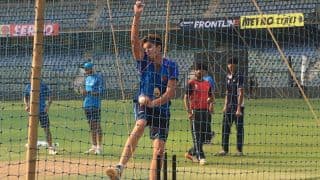 Arjun Tendulkar shines for Mumbai in Cooch Behar U-19 Trophy