Joe Root cannot suppress his inner-stickler for scoring runs. You may call him impatient when the situation demands him to remain solid at the crease, but that is how he approaches his game.

Joe Root cannot suppress his inner-stickler for scoring runs. You may call him impatient when the situation demands him to remain solid at the crease, but that is how he approaches his game. And that very attribute helped him brave Australia on Day Four of the second Test.

England were down in the dumps after they lost both openers in a run. Alastair Cook and Mark Stoneman had added 53 for the opening stand, but Australia dramatically bounced back and caught England by the throat.

It was twilight, that time of the day when the pink ball misbehaves with the batters. On Day Three, Australia had lost 4 wickets in the last session. The same was expected tonight.

But, England had nothing to lose. They would perish if they do not attack. Root took the responsibility.

With three slips and a gully waiting for an edge, Root dared to open the face of the bat. Coaches may find it idiotic, but Root trusted his instincts. He challenged Steven Smith s field setting. The runs came by and came in boundaries.

There is Nathan Lyon often in the vicinity to provide breakthroughs. He came round the wicket and bowled a probing length, employing a forward short-leg and leg slip. Root was lucky on a few occasions. He even had a brain-fade, leaving the one pitched on middle. He straightaway went for a referral. Fortune favoured him: the ball would have missed the stumps.

Vince walked back. England lost their third wicket. Root now was one comrade less to brave the storm.

All David Malan had to do was remain unbeaten. Root was anyway getting bulk of the work done. He was on a mission.

There was another loud shout. The Australians were confident that Root induced an inside edge. Smith went for the referral. The replay showed no nick. Luck remained with Root. Australians had their hands on their heads in disappointment.

The edge that has been pushing England into ruins remained eluded. Root often found the middle of the bat, pampering the off-side field with panache. However, the drama came to the fore at the stroke of stumps. Pat Cummins bowled a snorter of a delivery to castle Malan’s defence. England sent Chris Woakes as a night watchman. He weathered the last few overs along with Root, taking England to 171 for 4 at stumps. England need 178 more to level the series.

James Anderson took his maiden five-wicket haul in Australia, also completing 800 wickets across formats. Woakes, too, had a great time with the pink ball. He finished with 4 for 36. So magnificent was England’s bowling that no Australian could score above 20 runs. They were bundled out for a paltry 138, setting up 354-run target. 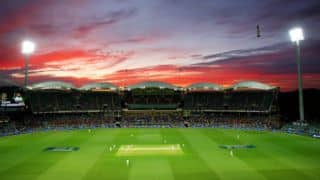