Shaun Marsh registered his maiden Ashes hundred on Day Two of the second Test at Adelaide Oval. After Stuart Broad removed Peter Handscomb in the very first over of the day, Marsh added two vital partnerships: 85 runs with Tim Paine and 99 runs with Pat Cummins. Australia declared at 442 for 8. Debutant Craig Overton was the pick of the bowlers, taking 3 for 105. In reply England lost Mark Stoneman early, trailing by 413 runs at stumps. Here’s how the day panned out.

Paine scored his first half-century in 7 years at the international level. The last time he had crossed the 50-run mark was in October 2010, against India. Paine upped the ante before the Englishmen hurl a peach of a delivery. He launched onslaughts in brief periods, not letting the bowlers settle down. His confidence gradually rubbed off on Marsh. Their innings steadied Australia, taking the score to 294 for 6. Overton had him caught, off a short ball, at deep square-leg.

Cummins had scored 42 at The Gabba. Continuing the good form, he helped Marsh further frustrate England. He, however, could not score his maiden half-century. Overton, again, provided the breakthrough.

Marsh scored his fifth Test hundred. It was of the same nature that Smith had approached in the first Test. Above all Marsh’s shot selection was impressive, attacking only when there is something on offer. Otherwise, he exhausted the English bowlers. He remained unbeaten on 126.

Overton had a commendable start to his Test career. After making Smith his maiden wicket, he dismissed Paine and Cummins. In short he took all vital wickets.

Smith declares at the right time

Australia declared immediately after the dinner break, catching the tired Englishmen off guard. It seemed that Australia were looking for a score of over 500 and would not declare until they lose all the wickets. However, Smith invited the Englishmen to bat when they expected the least.

England had a positive start to their innings. Alastair Cook and Mark Stoneman counterattacked to unsettle the Australian bowlers, but Starc, as always is the case, found a way to get a wicket. He used his favourite weapon in his ammunition a full and swinging delivery to trap Stoneman in front. 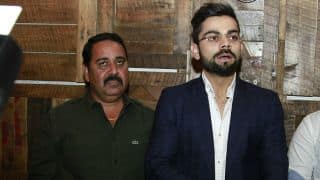