As has been the story thus far, Steven Smith penalised England for squandering, scoring an unbeaten 92.

England would be ruing over losing 6 wickets for 35 runs after Dawid Malan and Jonny Bairstow gave them a realistic chance to bury Australia under a colossal total. As has been the story thus far, Steven Smith penalised England for squandering, tallying an unbeaten 92. Australia trail by 200 at stumps on Day Two of the second Ashes Test.

England compiled runs throughout the park in the first half of the morning session and lost 6 wickets in the next half. The Perth wicket continued being benign to the batsmen, but the English lower-order were numbed while waiting for their chance to bat as Dawid Malan and Jonny Bairstow batted for almost three sessions.

Steven Smith conjured Nathan Lyon, his go-to bowler when the pacers run out of steam. With a spinner bowling, Malan lost his composure and shimmied down to launch an attack over Lyon. However, all he could manage was a leading edge to point: Peter Handscomb took a spectacular catch. The highest fifth-wicket partnership for England at Perth barricaded at 237 runs.

Three balls later, Moeen Ali joined Malan in the dressing room, and the wicket-losing saga carried for the next 7 overs. From 368 for 4, England were throttled to 403.

Amidst the carnage, Bairstow scored his maiden hundred against Australia and headbutted his helmet (the gear that protects him from the very gesture) to celebrate the milestone.

The English pacers could not get enough purchase off the wicket, but neither did Australia look eager to make an impact. David Warner and Cameron Bancroft waited for bad deliveries, something that James Anderson and Stuart Broad do not have a reputation for. The second session in fact ran slow.

But then, the ashes rise in the air when the heat drops down. This is Australia vs England. Craig Overton dismissed Warner and Bancroft in quick succession.

England had the momentum by their side, but snatching it at the crease was Smith. A cover-drive followed by a punch down the ground brimmed him with confidence. Usman Khawaja, too, had a good time squeezing the ball through the gaps. The duo sewed 124 runs for the third wicket.

Half an hour before stumps, Chris Woakes gave England something to cherish for. Khawaja could not get his bat down in time to defend an in-swinger. He went for a hunky-dory 50.

At the crease (and forever) is Steven Smith joined by Shaun Marsh. 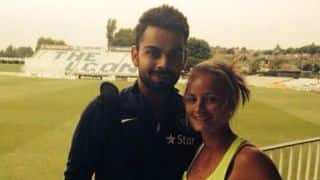