Australia have a splendid record at Lord’s against England. Nishad Pai Vaidya picks five memorable Ashes victories at Lord’s by Australia.
There is something about Lord’s that gets the best out of Australia in Ashes Tests. The Mecca of Cricket has historically been a happy hunting ground for them and Michael Clarke’s men showed on Day One of the ongoing Test that it is indeed a momentous venue that lifts their spirits. The annals of Ashes history are replete with instances where Australia have turned things around at Lord’s even when they were written off by the majority.

The last time England and Australia faced-off at Lord’s (in 2009); the hosts prevailed by 115 runs. The margin doesn’t reflect the Australian fight as they chased a mammoth target of 522 in the fourth innings and finished on 406. During that chase, they did give England a few scares when Michael Clarke struck a spirited partnership with Brad Haddin and Mitchell Johnson extended their fight. That it was England’s first victory against Australia since 1934 reflects how the visitors have dominated the scared turf at the ‘Home of Cricket.’
Australia’s overall record at Lord’s is splendid. Here is how it stands today:

*includes the Test against Pakistan in 2010 and one against South Africa in the 1912 tri-series. Australia won both the matches.

Out of the 14 Ashes victories at Lord’s, nine came in the period between 1934 and 2009. The Ashes 2013 presents Australia an opportunity to avenge the defeat of 2009 and regain their dominance at Lord’s.

Here are some of Australia’s memorable Ashes victories at Lord’s.

Wisden remarked that the general opinion before the series was that  “Australians were by no means equal on their merits to the best team in England.” However, the tourists were to prove otherwise. In a game owned by John James Ferris and Charlie Turner, Australia breezed past their rivals by 61 runs. The visitors won the toss and elected to bat first and were bowled out for 116. However, Turner (5) and Ferris (3) proved that it was more than enough when they bowled England out for 53. George Lohmann and Bobby Peel combined to bring England back into the game by rattling Australia for 60 in their second innings. Ferris was the top scorer with 20 to his name.

Turner and Ferris returned to share the spoils in the second innings yet again. This time both accounted for five wickets apiece. England were shot out for 62 and even WG Grace couldn’t help them chase down a target of 124. This match ended in a matter of two days. Wisden reported,  “So ended a game that will never be forgotten in cricket history, and one which practically ensured the fame of the Australian team.”
2. 1930: 2nd Test

It was a tour during which Sir Donald Bradman announced his arrival to Ole Blighty. Having overcome Bradman’s heroics in the first Test at Nottingham, England were confident when they elected to bat first. Duleepsinhji essayed an innings of 173 to help England post 425. But then, Bradman was on show, mesmerising the purists at Lord’s with an innings of 254. Neville Cardus wrote,  “The power and the ease, the fluent, rapid, vehement, cold-blooded slaughter were beyond sober discussion.” The great man himself felt it was  “technically the best innings” of his life. Bradman’s epic and the captain Bill Woodfull’s 155 took Australia to a mammoth 729 for six declared. Percy Chapman’s free-flowing 121 did help England take a lead in the second innings, but Australia chased the 72 required for victory with seven wickets to spare.
3. 1948: 2nd Test

Bradman’s Invincibles were on a mission when the Ashes resumed after World War Two. Moreover, it was Bradman’s farewell and he wanted to win the urn at all costs. Malcolm Knox wrote that in the aftermath of the World War, some players wanted an atmosphere of camaraderie and friendship, but Bradman was focused on victory. With all the eyes on him, he was scratchy in the first innings at Lord’s — scoring 38. Arthur Morris picked up pace after a sedate beginning and hit 105 off only 166 deliveries setting a base for Australia to post 350. In reply, Ray Lindwall’s fifer bowled England out for 215, helping Australia take a 135-run lead. In the second essay, Australia’s top three took complete control. It was Sidney Barnes’ chance to fulfil his dream of scoring a hundred at Lord’s. As Wisden reported, he let Bradman score briskly and was cautious till he reached 50. After that, he opened up and finished with 141. Bradman was more fluent in this innings — pacing his way to 89 in his final Test innings at Lord’s. Australia declared at 460 for seven, leaving England with an improbable 596 to get. With all the rain around in the air, Lindwall and company were on song when England’s pursuit began. Ernie Toshack was the star with his spell of five for 40 bundling England out for 186. Living up to their status of ‘Invincibles’, Australia sealed the deal with a whopping 409-run margin — which remains the highest victory margin by runs at Lord’s.
4. 1972: 2nd Test

Famously known as ‘Massie’s Test’, a young Australian swing bowler stunned England and literally battered them into submission on debut. Heading into this Test, Australia had Dennis Lillee and Bob Massie, two contrasting bowlers who combined well at Lord’s. While Massie relied on movement, Lillee was genuinely quick. Using the conditions, Massie used his out-swing to great effect. He wrote in the Guardian, “The conditions were very conducive to swing bowling, so I thought I might do quite well.’’ But, he may have surpassed his own expectations. 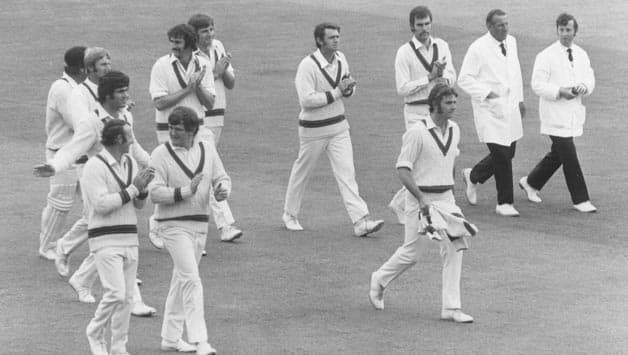 England elected to bat first, oblivious of what was to hit them. Massie outsmarted a formidable line-up comprising Geoffrey Boycott, John Edrich, Basil D’Oliviera, Mike Smith and Tony Grieg with a spell of eight for 84 as England managed 272. Greg Chappell’s vigil of 131 helped Australia take a slender 36-run lead. In the second innings, Massie was in a more vicious mood. He took eight scalps again and England were packed off for 116. Australia overhauled the 81-run target with minimal fuss. Massie’s match figures of 16 for 137 remained the best analysis on Test debut until Narendra Hirwani recorded 16 for 136 in 1988.

It was after years that England were considered a formidable opponent for a world beating Australian side. Ricky Ponting led his team into Britain to defend the Ashes — which were held by Australia for more than a decade. Michael Vaughan’s England had adopted a ruthless approach to Test cricket and many felt they could give the Australians a run for their money. In the first Test at Lord’s, England took the early initiative courtesy Steve Harmison, who blew away the tourists for 190. In reply, Glenn McGrath flustered the English top order and reduced them to 21 for five. But, debutant Kevin Pietersen lived up to all the hype and hoopla and gave the Australians a taste of their own medicine. His counter-attacking 57 rescued England from the dumps, although they conceded a 35-run lead.

That was the window of opportunity the tourists were looking for. Led by Michael Clarke’s brisk 91 and other cameos, Australia finished on 384 setting England a target of 420. Pietersen made another statement with an innings of 64 — which wasn’t enough to stop Australia from sealing a 239-run victory.