The best and the worst from day three of the second Test between Australia and India at the Optus Stadium in Perth.

The best and the worst from day three of the second Test between Australia and India at the Optus Stadium in Perth.

Jasprit Bumrah bowled his heart out and by his own admission, he could have bowled worse than today and walked away with at least 3-4 wickets. However, for all his toil of 13 overs, Bumrah returned just one wicket. But that one wicket was a thing of beauty.

It was an error in judgement on Harris’ part. Once again he did all the hard work but failed to convert his start. It was a good length delivery, landing just outside off and then it moved back in with the angle. Harris watched the line closely and then decided to leave. But to his surprise, the ball moved back in just enough to clip the off bail.

The talisman of India’s batting reached his 25th Test century with a lovely shot down the ground through mid-off. It was pitched up around off and met with great timing and placement. Off came the helmet and Kohli celebrated. He had a determined look on his face. With that stroke, Kohli became the second quickest to complete 25 Test tons, taking 127 innings, only behind Sir Don Bradman (68). Also, he has equaled Sachin Tendulkar for most hundreds by an Indian batsman in Australia (6).

25th Test century for Kohli and his 7th against Australia.. pic.twitter.com/plV792iDFM

When Virat Kohli hit the only six of his innings, he completed 5000 Test runs batting at number 4 in 86 innings, fastest to do so, bettering Jacques Kallis tally of 87 innings.

Australia have got a very special spinner in @NathLyon421. He has got terrific variations and uses the pace and bounce from the pitch to extract maximum value. #INDvAUS

Reprieve of the day

The manner of Kohli s dismissal left a sour taste in the mouth. The skipper edged one from Pat Cummins to be caught by Peter Handscomb at the second slip. The Aussies immediately began celebrating and the on-field umpire s soft signal was out.

Handscomb took the catch real close to the turf and there wasn t a conclusive evidence of the ball touching the ground meaning the third umpire had to upheld the on-field decision. Kohli walked back after hitting 123 off 257. 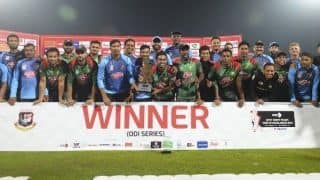