The best of India in Australia: Sehwag curbs his instincts to save the day in Adelaide

The best of India in Australia: Sehwag curbs his instincts to save the day in Adelaide

Overlooked for the first two Tests, 18 months without a century, a potential defeat looming large and then Virender Sehwag produces an innings for the ages.

Virender Sehwag displayed a facet of his batting on the final day of Adelaide Test in January 2008 that one would rarely associate with his style. He batted almost throughout the fifth day of the fourth and final Test against Australia, keeping his natural instincts in control when the situation demanded it and constructed an innings worth its weight in gold which saved India from a potential defeat.

Out of India’s 269/7d in their second innings, Sehwag’s contribution was 151 when others barring MS Dhoni failed to touch 20. He consumed 236 deliveries and struck 11 fours and two sixes to ensure India finished the eventful series on a decent note.

Sehwag terms this particular knock of his as the most satisfying. Other than that it came in a match-saving cause, the century also helped the Delhi batsman revive his Test career after he failed to find a place in India’s initial 24-man preliminary squad chosen for the tour. If it wasn’t for statemate Gautam Gambhir’s injury, Sehwag would have watched the Australia Tests on his television set at home.

Then there was a little matter of Sehwag going 18 months without scoring a Test century ahead of the Adelaide match.

Making the squad wasn’t a guarantee that Sehwag would get a game. And so he watched from the sidelines as India suffered heavy defeats in the opening two Tests in which Rahul Dravid was made to open the innings alongside Wasim Jaffer.

Enter Sehwag and he proved to be a lucky charm for captain Anil Kumble as India pulled one back, winning the third Test in Perth to make it 2-1. Sehwag scored 29 and 43 across the two innings but he would end up making a telling impact in the following Test.

India were bowled out for 526 in their first innings in Adelaide after a magnificent century from Sachin Tendulkar and half-centuries from Kumble, Sehwag, Harbhajan Singh and VVS Laxman. Australia replied in kind through hundreds from Ricky Ponting, Michael Clarke and Matthew Hayden and took a 37-run lead.

India’s second essay was all about Sehwag. He had lost opening partner Irfan Pathan for a six-ball duck on the fourth day itself and then when the innings seemed to have settled into a nice rhythm, Dravid had to retire hurt after fracturing a finger on the fifth morning. Tendulkar walked in as the next batsman.

Amidst the drama, Sehwag at the other end, had been scoring runs in his inimitable fashion. Full length deliveries resulted in scorching drives, short deliveries were cut without any mercy and he didn’t shy away from charging forward and taking the aerial route too. He reached his half-century with a cut through gully for four and was particularly aggressive against chinaman Brad Hogg whom he hit him for a six over long-on despite Australia having stationed a fielder there. And he followed that six with a cover drive for a four.

Sehwag reached his century in the first session itself and was single-handedly driving the scoreboard with the team’s overall tally reading 128/1.

Once Tendulkar was run out for 11, Australia sensed an opening. So, Sehwag took a step back. In the first session of the fifth day, he had scored 73 runs. In the second, he scored just 29 without hitting a single boundary. In the final session, he lasted 37 more deliveries and was out caught behind for 151 handing the retiring Australian wicketkeeper Adam Gilchrist a record-extending 416th dismissal.

India finally declared at 269/7 and both the captains agreed no result was possible. Sehwag had secured a draw, the first time in 10 years that Adelaide Oval had produced a draw.

And at a personal level, Sehwag had emphatically answered his critics while producing a career-defining knock. 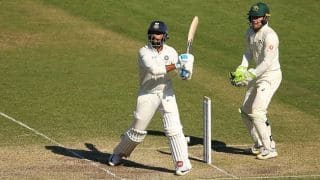 Murali Vijay has no fear of Australia 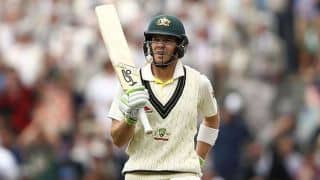