The changing face of modern cricket

The changing face of modern cricket

By Madhavkrishnan Change is constant - an aspect of every game. The best example is the game of tennis, which has moved over from the classic wooden racquets, single-handed backhand to the modern day powerful racquets, and the double-handed backhand. Or the predominance of players infatuated to sticking around the baseline, in contrast to the dwindling of the serve and volley practioners of the past. 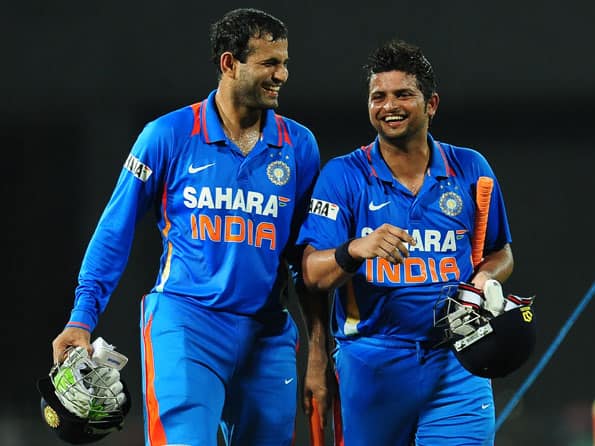 Recently, Irfan Pathan (L) and Suresh Raina chased down a target of 287 against Sri Lanka. Batsmen are no longer intimidated by an eight-plus asking rate © AFP

Cricket is going through a sea of changes – the use of two new balls in the same innings in One-Day Internationals (ODIs) being a case in point. Yet, there is an air of ‘so near yet so far’ when it comes to the use of technology, thanks to the child-like stubbornness of the Board of Control for Cricket in India (BCCI). Quite clearly, many respected voices in cricket are unhappy with India’s posture and Tony Greig spoke his mind out on the same in his delivery of the MCC Spirit of Cricket Lecture.

Change is constant – an aspect of every game. The best example is the game of tennis, which has moved over from the classic wooden racquets, single-handed backhand to the modern day powerful racquets, and the double-handed backhand. Or the predominance of players infatuated to sticking around the baseline, in contrast to the dwindling of the serve and volley practioners of the past.

Recently, Suresh Raina and Irfan Pathan chased down a target of 287 against Sri Lanka. It convinced me that batsmen are no longer intimidated by an eight-plus asking rate. Whether it has got to do with the proliferation of T20 or if it has to do with high quality of modern bats is, of course, debatable.

While change is constant, it happens for the good. But, our case proves to be a red herring. Test cricket’s case is like a Waterloo within the Waterloo of cricket. Capitulation and confusion have become white collar.

In the year 2011 alone, eight bowlers picked up five wickets in an innings on debut. Batsmen have capitulated to some shoddy bowling. Only Vernon Philander, Ravichandran Ashwin and Pat Cummins have staked bigger claims with enough promise.

Philander has emulated bowlers of the pre-War era. He has picked up 63 wickets at an astonishing average of 15.96 in just ten Tests, despite being slower in pace than his compatriots – Dale Steyn and Morne Morkel. Without taking any credit off him, another pointer is the art of batting going downhill.

The last two bravado acts of real ‘Testing’ batting could be VVS Laxman- Ishant Sharma stealing the Mohali Test from the Aussies and Paul Collingwood batting with the last batsman to save a Test in South Africa. Despite this, there is a sense of insecurity for every bowler. The balance has tilted towards the batsmen in every aspect – right from the benefit of doubt going to the batsmen in case of close calls, to the proliferation of batting havens prepared by curators.

Notwithstanding this, no team has clearly ruled the roost after the downturn of Australian cricket with the exodus of a generation of match-winning greats. England has been the team to beat at home, though South Africa have pulled off a heist of sorts in England to gain the No 1 ranking in Tests. Australia has failed against England, both home and away. Australia and South Africa had a painfully short series in South Africa in which two Test matches of the highest quality were played out, ending 1-1. Probably, the big series Test cricket badly needed was cut down to two by poor scheduling and conflict of interests between formats.

India is on a 0-8 losing streak overseas. As always they have failed to be good travelers, but have been very formidable at home. Sri Lanka, in the post-Mutttiah Muraliatharan period, have looked insipid without a genuine quick bowler to rattle oppositions. Pakistan lost in Sri Lanka, while they whitewashed England in their home away from home. England’s sour Asian date continued when they lost another series in Sri Lanka, with spin being the nemesis.

West Indies have shown enough dour, but have gone down fighting. Along with New Zealand, they have languished in the bottom of the pyramid, beleaguered by their host of problems.

Scheduling has come under the pump as even Test matches are eked out after sacrificing a couple of shorter games. The warm-up game played with the local clubs and counties has become obsolete with touring parties opting to play only the big games.

This hara-kiri is because of the modern player being unable to manage the different formats. While a pint of innovation might still be effective in Test cricket, poor shot selection, patience deficiency and departure from the text-book style have left batsmen gasping while bowlers have succumbed to overtly negative lines. Spinners, in particular, are the worst hit, with their extra incentive to give the ball some air absent because of operating in flatter channels in the shorter formats.

Before we clean up macro issues like money power, BCCI’s clout, and the sprouting of lucrative leagues in various countries, we have to look into the finer details. Maybe the time has come for cricket to stop glorifying its past, star-eyed and also brandish the newbie as the game’s future. Maybe cricket has to stick to tradition. Maybe it is the time to give truth its day.

(Madhav Krishnan  is a student from Birla Institute of Technology & Science (Hyderabad), pursuing M.Sc (Chemistry) and B.E. in Mechanical Engineering)

VVS Laxman one of the finest players of our times: Mahela Jayawardene