In what seems to be a baffling case, India in the recent times have struggled to dismiss the opposition’s lower order.

Bowling has been a matter of concern for India for a long time. In Sri Lanka, this year, they have bowled better but once again on Sunday; they found it quite a task to get rid of oppositions’ tail-enders. In the ongoing decisive third Test, Sri Lanka were languishing at 47 with six men down in the first innings but ended up posting of 201 on the board. Suraj Choudhari takes a profound look at the obstacle, which has haunted India on several occasions.

With the evolving game the standard of performance has too gone high. Tail-enders are no longer considered as inconsequential and in most of the teams they’ve accounted for a reasonable amount of runs. That time no longer exists where getting rid of them was just a matter of time.

In what seems to be a baffling case, India in the recent times have struggled to dismiss the opposition’s lower order. The first innings of the SSC Test reminds the Nottingham Test from the India’s tour of England in 2011. England were struggling at 88 for six when the lower-order batsmen turned the game for England. They posted 221 in the first innings and eventually won the Test by 319 runs. The entire series witnessed the lower-order batsman score runs heavily. This even continued in 2014. Remember Wellington in 2014, India well poised to win the Test got New Zealand reeling at 95 for five, they recovered and got 680! Even in the 2014 tour to England, India squandered an opportunity to win a Test at Nottingham. They had England at 280 for eight and they recovered to 496, even managing a lead. Joe Root along with James Anderson put up a mammoth stand of 198 runs between them.

This trend even continued in Australia where India lost the series 2-0. Despite the change in captaincy, this soul factor is back to haunt India. In the first Test at Galle, India had half the Sri Lankan side out for 60 in the first innings but they ended with 183. Trailing by 192 runs, in the second innings it seemed that Sri Lanka were heading towards an innings defeat. From 95 for five, they put on 367 and won the Test by 63 runs! Yes, umpiring played a role here but we saw how impactful the runs from lower order can be.

These runs put additional pressure on the opponent and further drifting the momentum away. India is missing that factor which a team like Australia possesses the best. Bowlers like Mitchell Starc and Mitchell Johnson can clean the lower-order with ease. It’s not for the lack of efforts but lot of mental discipline too comes into play. At times, a team tends to go lenient when ample of early wickets are clinched and might lose the gained momentum too.

Where did India lose the plot on Sunday? In seaming conditions that SSC presented, a batsman needs to either have the discipline to show patience or look to go ballistic. Debutant Kaushal Perera and Rangana Herath chose the latter and with success. However, India missed a trick by not introducing Amit Mishra then. Agreed that Mishra is a leg-spinner and both the batsmen at the crease were left-handers, India could have looked to attack. Mishra as he has a plethora of variations up in his sleeve. His googlies and wrong ones are difficult to pick as he delivers them with any detectable change in action further making it an arduous task for the less established batsman to tackle.

He is well capable of cleaning the tail and further avoids those bonus runs.  It’s been a pattern for Indian bowlers to have their tails up at the start of the innings with all the enthusiasm fizzing away once they get into good positions. They haven’t been able to go for the kill.

India may be in a good position in the Test and may end up winning the series but to climb back in the Test ranking, this is a serious issue that they will have to overcome and resurrect at the earliest. 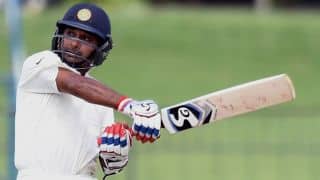