Srinivasan told Edulji, If I had my way I won t allow your women s team to play cricket only. She asked with surprise, Why sir? Why would you say that? Give us a chance at least to prove ourselves, we will do well. Srinivasan was blunt, I m not interested, we have no choice but to run it, so we are running it for sake of running it.

Who won the last FIFA World Cup? Germany. Easy, isn t it? Who can forget that extra-time-goal from Mario Gotze? Why is the answer to this question never United States? A year post Germany s World Cup triumph in Brazil, Canada hosted the FIFA Women s World Cup. United States downed Japan 5-2 at Vancouver in presence of 53-and-a-half thousand spectators to lift the trophy for the third time.

Let us admit, barring tennis and a few Olympic sports, we Indians do not really care about women s sport. It is wrongly put as India s patriarchal mind-set. Wait, is it just about India? Or else, we would have remembered Sarah Taylor more for her on-field exploits than the striking good looks. The benchmark is not the same for a Joe Root or Kevin Pietersen. For a fact, England Women lifted their fourth World Cup on Sunday, their men have been a part of three finals (the last being in 1992). They have won none.

Now this is about India.

For once, the girls managed to unite the cricket fraternity. In the Women s World Cup final India made the nation flock in front of television sets. They rooted for the side with same zeal as they did for Virat Kohli s men a month back.

The verdict was out there earlier. The pundits had agreed that Australia, England, New Zealand were certainties, while India or South Africa were the can-be options. India beat the odds and came agonisingly close to lift it.

Live broadcast and media does make the difference. It was not for the first time that India has witnessed this resurgence. Once upon a time, the likes of Diana Eduji were stars. We had all heard of how Edulji had responded to Richard Hadlee s challenge and won a bat. The media of the era, primarily radio and print, were chief catalysts in making the likes of Eduljis and Sharmila Chakrabortys stars.

Former captain Shanta Rangaswamy (the first woman cricketer to receive the Arjuna Award) had mentioned that it was common to see a crowd of 40,000 during women s Tests.

Then came the decline in popularity. In fact, when India played Australia in the final of 2005 World Cup, the match wasn t even televised.

From the good old 1970s to now, the Indian women have managed to catch hold the attention and fandom. They were 10 runs close to laying their hands on the World Cup. But that was not to be. The nation mourned. The camera focused on Rajashwari Gayakwad s welled-up eyes. Millions around the country emoted the same.

Even Broken Hearts Can Laugh!!

These Women have started a revolution & I couldn’t be more proud #WWC17Final pic.twitter.com/gVfHI08XHi

Revolution is the right word.

We will hopefully remember the runners-up. In this competition circus, they say no one recalls who came second. Don t we still talk about the valour of Sourav Ganguly s men in 2003, who just stumbled upon in the last hurdle?

Mithali and her girls have resurrected the interest level in women s cricket, partly thanks to the media and broadcast. A sincere hope that this continues.

Women inspire. They give birth. They bear pain. They are as sincere as anyone. They can hit 80- metre sixes. They can perform the Produnova. They can wrestle. They can do it all except fulfilling Rishi Kapoor s fantasies.

Then why the disparity?

Mithali Raj and Jhulan Goswami have inspired many girls over the years. They inspire me. Harmanpreet Kaur is India s new poster girl. Her YouTube videos of the penultimate-ball six in the World Cup qualifier final, the six in the WBBL and now the 171 not out have gained popularity close to MS Dhoni s finishes.

Over years I have followed the scores of women s cricket and kept a track but haven t really felt the urge to spend time and watch 100 overs of relatively slow-paced cricket. Things changed since Harmanpreet and Smriti s stints with WBBL and Women s World Cup Qualifiers earlier this year.

Things changed to such an extent that I chose to not watch the India vs Australia semi-final live. I watched the delayed streaming as highlights. The superstition went: Australia were too strong. India might win if I did not watch it. Perhaps, I lament I did not do the same for the final.

The fan stood out in me. I watched all the 292 legal deliveries bowled in the final. I felt as shattered as I did on March 23, 2003 when Ricky Ponting had walloped the Indians at Wanderers. Perhaps even more as this was closer. With Veda Krishnamurthy and Punam Raut at crease, I sniffed the metal. I envisaged a bus-ride in the Mumbai rains with Mithali holding the trophy and the city going berserk.

My heart raced with the thought of Mithali and Jhulan posing with the trophy at the Lord s balcony much to the dismay of Rishi Kapoor.

And it s not me

I received scores of calls from friends who wanted me to join them in some hangout, like the old college days, cheering Mithali and her girls. Unfortunately at college, in 2005, hardly one knew India played Australia in the final then.

The revolution shall continue Indian fans, our women need you.

It s a simple first step. The nation knows the girls. The matches should be live telecast. Mithali and Jhulan need to push themselves for a few more years to be the guiding force. We need administrators who care about cricket, holistically.

The WBBL has given exposure to the two girls who have played (Smriti and Harmanpreet). If more girls participate in such leagues, it will give them experience and help them to improve their own game. If you ask me, they should have (women’s) IPL because now is the right time to create that base, said Mithali after the World Cup loss.

It is not just Mithali, in my conversation with VVS Laxman a few months back, the cricket legend was of the same opinion as well. He felt if Australia can have WBBL running parallel with BBL, why not the same in IPL. He also floated the idea of having the women s IPL games played before the start of the men s.

Edulji, now a member of CoA, shared an interesting story on N Srinivasan, the man who could not be shaken by fiercest of tempests.

Edulji recalled what Srinivasan told her, If I had my way I won t allow your women s team to play cricket only. She asked with surprise, Why sir? Why would you say that? Give us a chance at least to prove ourselves, we will do well. Srinivasan was blunt, I m not interested, we have no choice but to run it, so we are running it for sake of running it.

When BCCI took women s cricket under its wing, it needed a lot of convincing from Edulji. It was ICC who told all the boards to bring women s cricket under their wing. The tournaments were run shabbily. They were made to wait for the most minute of things. Truly, it was all for the sake of doing it. A stepmother would have cared more.

A question to ask. Do we need them? Is the law so weak that these bunch merrily toy with Supreme Court verdicts?

The scenario has changed for the girls though. The women, even though less than a tenth of their men counterparts, have contracts. The facilities have got better. They are recognisable.

There is media supporting them. There are fans yelling and praying for them. Let s expect a new dawn for India Eves and Women s cricket, and women s sports overall. They work equally hard and their battle has been everlasting against prejudices. 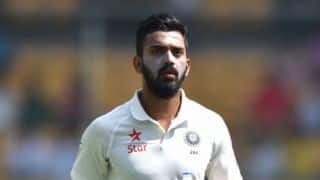 India vs Sri Lanka: High fever can rule KL Rahul out of the Galle Test