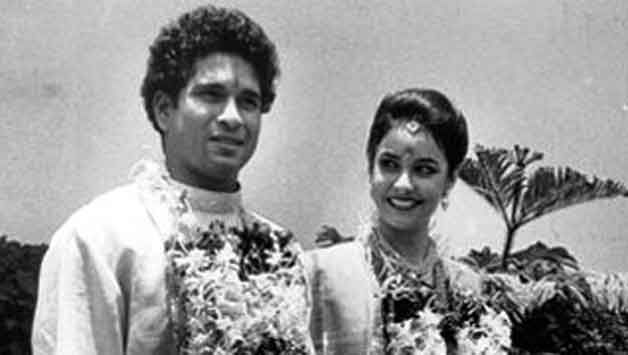 Love at first sight… Anjali Mehta (right) was at the Bombay airport to receive her mother during the summer of 1990, the same day Sachin Tendulkar had flown back from England, when their eyes met and they fell in love.

He was a child prodigy beyond the most miraculous marvels conceived by minds. And even as he stepped firmly into manhood, his voice refused to break. His smile retained the cherubic glow. The ardour of every cricketing quest and the ecstasy of every triumph remained undiminished — never did the childlike charm and unbridled spontaneity dwindle from the 16-year-old who first donned the Indian cap. Hence, it was perhaps appropriate that the master, an eternal child, was hitched for life with a paediatrician.

Legend has it that Anjali Mehta was at the Bombay airport to receive her mother during the summer of 1990, and on the same day Sachin Tendulkar had flown back from England — after the series that had seen his first Test hundred. It was at the airport that their eyes met, sparks were ignited and soon the relationship took off.

Apparently, when they had exchanged their first glance, Anjali had no idea who the chubby-cheeked young man was. She was the daughter of Gujarati industrialist Anand Mehta, a bridge player of international repute, and British philanthropist Annabelle Mehta. A medical student, Anjali had little idea about the strange game of willow and leather. Only after the two started dating did she make an effort to pick up the basics of cricket. According to interviews given later by Anjali, Sachin Tendulkar had to don a disguise to watch their first movie together – Roja – without being mobbed by innumerable fans. Often Mrs. Annabelle Mehta would disguise Tendulkar lovingly in wig and beard and smuggle the couple out to family holiday homes in Lonavala and Goa.

In 1994, at Eden Park, Auckland, Tendulkar started a glorious new chapter in his cricketing life. Opening the innings for the first time in a One-Day International (ODI), he hammered the New Zealand attack to score 82 from 49 balls with 15 fours and two sixes. This transformed him into the most successful ODI batsman ever in the history of cricket, and perhaps provided the impetus to take the relationship to the next level. It was in New Zealand in 1994 that Tendulkar and Anjali Mehta got engaged. Yes, the calendar said that the lady was older than the maestro by five and a half years. But, Cupid’s bewitching arrow effortlessly pierced through the age difference.

The two got married on May 24, 1995. Seldom had a wedding attracted so much national attention since Rajesh Khanna had tied the knot with Dimple Kapadia. In fact, this occasion went even further. Cricketing, media and socialite worlds converged into a glittering galaxy of stars and international press splashed it across the cricket savvy world.

It has been 18 years since then, and has proved to be the best partnership Tendulkar has ever been involved in — and they have been blessed with a daughter [Sarah] and son [Arjun], and a like any sports superstar, Tendulkar has had his moments of sublime highs, and moments of trepidation. The price of fame can be high, especially in a country like India. However, the strength of the union has carried the master and his family through the highs and lows that life has thrown at them.