It seems futile to deny that Virender Sehwag's one foot is already beyond the dreaded white line.

Just before the ICC World Cup 2011 commenced, during one of the many inexorable promotional events, Sir Vivian Richards was asked who among Chris Gayle, Tillakaratne Dilshan, Adam Gilchrist and Virender Sehwag was the most feared batsman in the world. “Sehwag! There is no doubt about it. He is just so destructive. He is totally fearless. India need him badly,” came the decided reply. India did need him. His early mauling of ‘ordinary’ Bangladesh set the tone for 380 runs in that tournament, which contributed towards India’s usurping of the title. Sehwag was India’s charm. He was indispensable. Forward ever, backward never. Read: Virender Sehwag wants to score ‘big runs’ for Kings XI Punjab in IPL 2015

When Sir Vivian Richards — one of the few emperors of batsmanship — grants entry into his nonpareil book, you safely assume eminence. Once cricket’s grail was bagged, that eminence was bolstered. MS Dhoni was a hero. Gautam Gambhir was a hero. Sehwag was a hero. India’s cricket was in safe hands for the foreseeable future. Transition was nondescript. This core team would carry on indefinitely. It was capable of carrying on indefinitely. Regardless, the team and its supporters could bask in the glory of a World Cup win endlessly. Even after the Indians were trounced in the first two Tests during the tour of England later that year, glory glossed the ‘aberration’. Virender Sehwag: I watch videos of my batting just to enjoy my boundaries

It took two more failed games — a whitewash and loss of top spot in the Test rankings — to realise there was a calamity. A 0-4 scoreline ensured that the cosy carpet of a World Cup win was mercilessly pulled from under the feet of the Indian players. There were calls for heads on wooden stands with an axe dangling atop it. But India needed Sehwag badly, was what the majority concurred. “The rest can be sent home, but hold onto Sehwag,” they seemed to say. When Sir Vivian Richards was speaking at that promotional event, he may have well been speaking on behalf of half-a-million Indians. Many presumed it would be a gamble to leave Sehwag out, and that the wait through his sombre patch would eventually be worth it. You couldn’t blame them, for Sehwag, in his prime, brushed aside a trough in form like an obnoxious fly. Virender Sehwag reaches 4,000 T20 runs during KXIP vs DD IPL 2015 match at Pune

Vintage touch, though, continued to elude him. There were sporadic bursts of characteristic brilliance, but it lasted as long as an overpriced déclassé item. Meanwhile, the Indian team ambled along, albeit stoically, but there was progress. Capable openers surfaced. They got the job done.

There were talks of a rift between Dhoni and Sehwag, but it was evident even to an interested layman that the former had outgrown the latter. Dhoni had outgrown his old self the moment he assumed captaincy as a 26-year-old, which was perhaps a factor in holding him in good stead. But Sehwag remained Sehwag, and why not, for it had worked flawlessly for him until a few years ago.  Nevertheless, recent times demanded a change, and when Sehwag didn’t seem to comply, the Indian team moved along.

There was, however, a platform named Indian Premier League (IPL) that threw up worthy names for India’s limited-overs artillery, while at times providing the have-beens and might-have-beens a glorious second shot. Sehwag could still make a return via this expressway.  But a good indication of how far he now lagged came when he almost went unsold for the seventh edition of the league. Delhi Daredevils (DD) discarded him for they realised reputations hardly won them any trophies. The IPL fan base no longer banked on an icon player’s place of birth to be able to relate to the team. The IPL now outgrew itself.

Kings XI Punjab (KXIP) saw in Sehwag the assembly of parts that once produced fixating fireworks. They probably considered themselves means in his brief return to prominence but with éclat. Sehwag, however, could not get a grip on the slippery slope he’s now undeniably still on. The unthinkable happened when he was left out of the Indian team and then out of DD; but the fact that he’s now no longer a mainstay even in KXIP — a team housing a bunch of novices — signals a final lap in his career. Although the franchise’s support staff continue to insist that his ouster is only temporary — which could well be true considering the fickle nature of the format — the end is undoubtedly nigh.

“When a person becomes satisfied, he doesn’t run after things, doesn’t worry about it, and doesn’t make efforts,” said Sehwag on the eve of his 100th Test match, almost three years ago. It makes one wonder if Sehwag’s continued stuttering has something to do with his now satiable appetite, for a resurrection looks improbable. There is no denying we’ve seen a glorious craftsman, but it seems futile to deny that his one foot is already beyond the dreaded white line.

(Karthik Parimal, a Correspondent with CricketCountry, is a cricket aficionado and a worshipper of the game. He idolises Steve Waugh and can give up anything, absolutely anything, just to watch a Kumar Sangakkara cover drive. He can be followed on Twitter at https://twitter.com/kartikparimal) 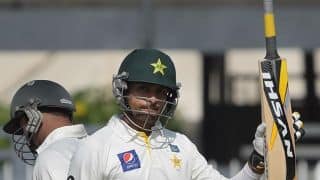 Pakistan in control against Bangladesh at tea in 1st Test, Day 2 at Khulna