The fascinating history of cricket in troubled Afghanistan

The fascinating history of cricket in troubled Afghanistan

Cricket was played in Afghanistan in the 1800s, the earliest-recorded match being against British troops in Kabul in 1839 during the Anglo-Afghan wars, but it didn't take off. 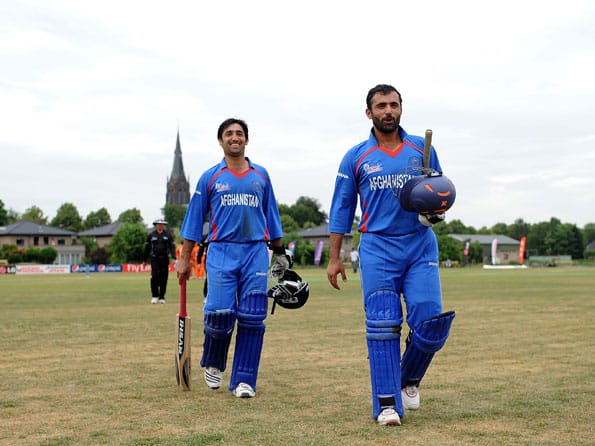 Cricket was played in Afghanistan in the 1800s, the earliest-recorded match being against British troops in Kabul in 1839 during the Anglo-Afghan wars, but it didn’t take off.

In the 1990s, it was picked up again by Afghan refugees living in Pakistan and continued to play after their return toAfghanistan. The Afghanistan Cricket Federation was formed in 1995, but within a year the country fell into the hands of the Taliban militia, who banned all sports.

Remarkably, in 2000, cricket became the only sport allowed to be played in Afghanistan, as the Taliban overturned the ban for this one exception to all sport.

In 2001 a national team was formed and became an affiliate member of the International Cricket Council (ICC). The team was touring Pakistan when the war in Afghanistan commenced in October. Despite this, they continued playing in tournaments in Asia and the Middle East. In fact, they even defeated a Marylebone Cricket Club (MCC) side featuring Mike Gatting, who was dismissed for a duck.

Obvious security risks mean their home ground is Sharjah Cricket Association Stadium in the United Arab Emirates (UAE), but have also played home matches in Sri Lanka. The Afghanistan Cricket Board, however, is based in Kabul, and in April 2010 the foundation stone for Afghanistan’s first cricket stadium was laid by the chairman of the Cricket Board (also the country’s Finance Minister) in Jalalabad. The Sherzai Cricket Stadium was to cost US $5 million and be paid for by the government.

Stadiums are also planned for Kabul and Kandahar, and standard cricket grounds for each of Afghanistan’s 34 provinces were due to be completed in 2012, also with no update on their status.

Despite this, there are 320 cricket clubs and six turf wickets in Afghanistan. In fact, there’s even a domestic competition, in which 22 provinces play a 25-over or 40-over format, aiming to make the game’s appeal more widespread, as well as develop talent. Crowds of up to 5000 watch these matches. Not without its own politics, the tournament also aims to remove perception that cricket in Afghanistan is exclusively played by one tribe.

Maybe most brilliantly of all, in 2010 a national women’s cricket team was formed in Afghanistan. Perhaps unsurprisingly, the team was forced to withdraw from a T20 tournament in Kuwait a year later because of ongoing and strong opposition to women’s participation in sport. Baby steps, but they are steps.

Leaps and bounds for the men’s team, on the other hand, who have gender on side. Only four years ago they were in Division 5 of the ICC’s World Cricket League. In 2010 they played in Division 1. They are currently ninth in the ICC T20 rankings.

The Afghan National Cricket Academy has only four training nets and one bowling machine. Imagine what they could accomplish with the resources that are available to teams like Australia or New Zealand – even Canada. Sure, the gulf between Afghanistan and the top-ranking teams on the table above is enormous (and teams like Bangladesh haven’t played enough to qualify), but their potential equally enormous.

Grassroots cricket success in a country torn apart by war. Are you not inspired?

(Miss Field has had a cricket blog for over four years, but her posts are few and far between. In the meantime, you can find her on Twitter. A passionate Australian, she’s currently calling New Zealand home)