The first Test on Indian soil had started at the Bombay Gymkhana on December 15, 1933. Abhishek Mukherjee looks back at a historic Test that also included the first-ever Test hundred by an Indian.

After India’s impressive somewhat impressive display in their maiden Test at Lord’s in 1932 the Indian Cricket Board were keen on organising a home series. Douglas Jardine’s team was scheduled to play three Tests in India in the winter of 1933-34. Given the success of the Quadrangular, Bombay was the obvious choice for the venue of the first Test.

The Bombay Gymkhana, where the first Test was played, was founded in 1875; it was a Europeans-only club, and the only Indians allowed were the servants; the rule was rather strict, and even KS Ranjitsinhji was denied entry. The restrictions, however, were lifted for the Indian cricketers in the previous season. There was a 20,000-strong crowd attending the match between MCC and Bombay Presidency, held only a week before.

This time, as CK Nayudu went out to toss with Jardine, more people than ever entered the ground to witness an unforgettable moment in Indian cricket. The numbers say that the crowd count for the day was 50,000, cramming themselves in to become a part of history themselves.

Morris Nichols bowled the historical first ball of the match to Wazir Ali. The English bowled tightly, with penetration and kept on picking wickets at regular intervals. None of the Indians crossed 40, and there was no partnership over 50. The Indians ended the day at 212 for 9.

MCC (that was how England was known during the trip, and on several subsequent tours), playing their 16th match of the tour, were expected to bat throughout the second day. However, the crowd poured in by the thousands, and the Indian innings folded for 219 early in the day. Lala Amarnath had top-scored with 38, and Nichols, Hedley Verity and James Langridge picked up three wickets apiece.

Though Mohammad Nissar broke through Arthur Mitchell’s defense early in the innings, Cyril Walters took charge, scoring a sedate 78. At 164 for four, things looked a bit hopeful, but at that point of time Bryan Valentine joined Jardine, and the two took the score to 294 for 4 at stumps, Jardine unbeaten on 53 and Valentine on 79, MCC all set for an easy victory.

When play began next morning, a new record was created: it was the first time international cricket was played on a Sunday — for India was the first non-Christian country to play Test cricket. Nissar broke through Jardine’s defense with a really fast ball to a huge cheer from the crowd. The crowd was patient, appreciative of the cricket irrespective of the side, but never indulging in the hooliganism that infested the Indian grounds later on. Valentine went on to score the first Test hundred on Indian soil, and finally finished at 136. MCC scored 438 — exactly double India’s score.

Nissar went on to take 5 for 90 in his second Test to better his debut haul of 5 for 93, and impressed all and sundry with his hostile fast bowling. He would play only four more Tests. The Indians fielded quite well, though nothing exemplified this more than Rustomji Jamshedji’s catch of Leslie Townsend. It was hit very hard back to Jamshedji (still India’s oldest Test debutant), which he clung on to, rather appreciably.

India began with 219 runs in arrears, and “Nobby” Clark struck immediately, removing both Wazir Ali and Janardan Navle to reduce the Indians to 21 for 2. Then Nayudu joined the debutant Amarnath. Both were aggressive batsmen, but given the conditions, Nayudu asked Amarnath to put his head down.

The two batted with sense, and piled up runs session by session. As Nayudu played with caution and negated the English attack over time, Amarnath grew in confidence and the strokes kept flowing. As the game progressed, Amarnath came to his usual self, and went past his fifty; then, just before the close of play of day, Amarnath reached his hundred — the first by an Indian, that too on his Test debut.

The crowd went ballistic. Even in 1933 cricket was a great unifier, bringing people together across religions in an almost unprecedented manner. People hugged strangers. Even Nayudu, known for his lack of display of emotions, had forgotten the rules of the sport and rushed to congratulate Amarnath without grounding his bat. Wicketkeeper Harry Elliott almost removed the bails when Jardine stopped him.

It was a spectacular sight, with the entire crowd at his feet; it was a spectacle unmatched by any other previous incident. As Amarnath left the ground for the day, unbeaten on 102, accompanied by his skipper on 44, the women tore off their jewellery and showered them on Amarnath. At 159 for 2 India seemed all set for a fightback on day four.

The Indians pushed the score to 207 for 2 on the fourth morning; the news of Amarnath’s hundred had got out, and people had travelled overnight — even from as far as Poona — to watch him bat. Nayudu also began to play his strokes, but then, Nichols struck: Nayudu fell for 67; a run later Amarnath fell to Clark, and this triggered a procession. Within no time Nichols ran through the remaining batsmen. And India were all out for 258. Only Vijay Merchant — also making his debut — showed some resistance with a 30, but ultimately MCC were left to score only 40 for a win.

Though Amar Singh removed Mitchell, Walters and Charlie Barnett rushed to victory in no time. Thus ended a historic match that can safely be considered an organisational success despite India’s easy defeat. Cash rewards were announced for Amarnath, and the English went to Calcutta 1-0 up in the series. 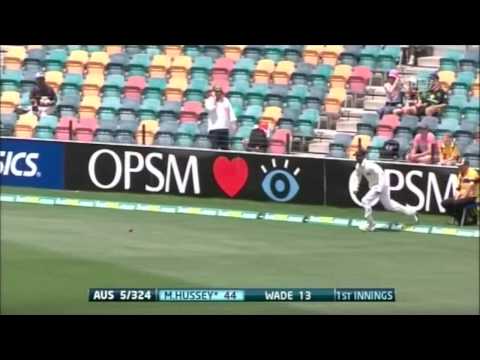