Fred Fane was born in Ireland and led England. He was Jack Hobbs' opening partner on The Master’s debut. He also read his own obituary in Wisden.

Fred Fane was born April 27, 1875. An Essex mainstay, an England captain, and the first Ireland-born to have scored a Test hundred for England, Fane also opened batting with Jack Hobbs on The Master s debut. Abhishek Mukherjee looks at a man who had once read his own obituary.

Wisden called Frederick Luther Fane a good-looking front-foot player, and they were right on both counts. In an era when wet wickets ruled Championship cricket, Fane had emerged as an Essex mainstay with a First-Class career that spanned close to three decades on either side of World War I. Fane also played 14 Tests, scoring 682 runs at 26.23.

Fane s numbers, 18,458 runs at 27.39 from 417 First-Class matches with 25 hundreds, were not impressive, but one must acknowledge the fact that Essex was not really among the strongest Championship side at the turn of the 20th century. Having played their maiden First-Class match ever in 1894, they were inducted into the Championship only next season (along with Leicestershire and Warwickshire).

Edward and Frederick Fane were brothers; while Edward played for teams like Eton College and Bishop s Strotford, Frederick went onto represent Chatham Garrison, Knickerbockers, and Gentlemen of Essex. Neither of these matches was unfortunately classified as First-Class.

Frederick s son, also called Frederick (and the hero for the current piece), was born at Curragh Camp, Co Kildare, Ireland. He went into Charterhourse, and later to Magdalen, Oxford University and earned a Blue for cricket. By the time he was 20 was inducted into the Essex side for their maiden Championship season; on his debut, against Sussex at Leyton, Fane scored 36 and a duck.

He continued to play for Essex as well as for Oxford University, but did not make it big till 1899. After Leicestershire were bowled out for 194 at Grace Road, Fane outscored them single-handedly, scoring 207 his maiden First-Class century as well as the first double-hundred in Essex s history. The hosts were trounced by an innings.

Fane toured West Indies that winter with RA Bennett s XI and the antipodes with Lord Hawke s team the next season. Though he failed in the Caribbean and Australia, he impressed in New Zealand, scoring 421 runs at 52.62. He was appointed Essex captain in 1904; in 1905 he scored 100 against Sussex and 106 against Yorkshire, both at home.

He top-scored with 57 against the touring Australians. However, his more famous achievement came in the other match against the same opposition that season when he had stationed himself at long-stop, owing to Claude Buckenham s express pace and perhaps his lack of confidence on the wicket-keeping of Edward Russell; he caught Frank Laver brilliantly to end the innings to pull off a 19-run victory.

He found himself on board the boat to South Africa that winter.

Unfortunately, the tourists were all at sea against the wiles of the South African spinners. With Aubrey Faulkner as their spearhead, they bowled out the hosts for 184 and 190, Fane scoring 1 and 3. Meanwhile, Lees, Colin Blythe, and Crawford had routed the hosts for 91, but excellent batting from Gordon White and Dave Nourse helped the hosts pulled off a 284-run chase after they had been reeling at 105 for 6.

The Test set a sorry trend for England in the series: they claimed the series 4-1, winning all Tests barring the fourth at Newlands. Fane showed his mettle for the first time at this level after he scored 60 in the second innings of the second Test, also at Old Wanderers: he scored 65 to lift England to 160 from 25 for 4.

After South Africa had scored 385 in the third Test at Old Wanderers, Fane found England on the back-foot again at 51 for 3. Determined to make it big this time, he added 84 with Leonard Moon, 88 with Hayes, and 57 with Albert Relf before falling for 143. He helped England reached 295, but Tip Snooke ran through them in the second innings. They lost the Test by 243 runs and with it the series.

It remained Fane s only Test hundred. In the process he became the first Ireland-born cricketer to score a Test hundred for England a feat that has been emulated by only Eoin Morgan.

England were reduced to 34 for 3 after they were set 159 in the fourth Test at Newlands, but this time Fane was not willing to budge; Moon, Relf, and Jack Board came to his aid, but it was his unbeaten 66 that gave England a 4-wicket victory. With 607 runs at 37.93 he finished only next to David Denton (613 at 32.26) on the tour. He also topped both the runs and averages charts for the Tests with 342 runs at 38 when nobody had crossed 300 or an average of 32 in the series.

Fane s success story in South Africa, along with decent displays in the next two English seasons, earned him a place in the 1907-08 Ashes tour. He started with 133 against Western Australia at WACA, but could not keep up with the good work in subsequent matches. However, when the appointed captain Arthur Jones reported unfit before the first Test at SCG, Fane was roped in to lead England in his first Ashes Test. He also remains one of the few Ireland-born cricketers to lead a Test side.

Note: The 1907-08 Ashes is perhaps the least-talked about of all great Test series. The general reluctance of cricket fans towards the series is almost criminal. Click here to read Arunabha Sengupta’s retelling of all five Tests.

Once again England were at the receiving end of a 1-4 thrashing; Fane performed poorly as well with a highest score of 50; however, he led in the first 3 Tests, and earned the tag of an Ashes Test-winning captain in the second Test at MCG, where he opened batting with a young Surrey batsman called Jack Hobbs.

Fane failed in the first innings, but after they were set 282 Hobbs and he added 54 for the first wicket; though George Gunn fell for a two-ball duck, Fane hung around with Kenneth Hutchings, scoring a 160-minute 50 and seeing England to 121. The match ended in a thriller with Syd Barnes, Joe Humphries, and Arthur Fielder adding 73 for the last 2 wickets to snatch a sensational victory.

Back to South Africa, and standing in again

Fane was selected for the 1909-10 tour of South Africa, but there was another achievement the summer before that. In that bout at Headingley Yorkshire had scored 292, bowling out the tourists for 90 and 114 with Wilfred Rhodes, George Hirst, and Schofield Haigh pulling off excellent performances.

In the first innings, however, Fane pulled off an excellent rearguard action after an initial burst from Hirst and Haigh left Essex reeling at three for three. Frank Gillingham smashed 40, but once he fell at 69 the rest collapsed in a heap against Haigh. Fane, however, remained unvanquished on 25, thereby becoming the first Essex batsman to carry his bat through an innings.

He did not succeed in South Africa this time (barring 103 against Rhodesia at Salisbury). He played all 5 Tests, but was not unable to cross forty even once. Once again England lost the series, this time 2-3 (though South Africa had sealed the series by the fourth Test).

Following HDG Leveson-Gower s injury Fane was appointed captain for the final two Tests at Newlands. England won the final Test thanks to Hobbs 187 and Blythe s ten-wicket haul. Fane never played another Test, which meant that he ended his career on a winning note.

Back to domestic cricket, and War

Fane continued to play till World War I, scoring his career-best of 217 against Surrey at The Oval. He scored 61 and 98 in the two matches against the touring Australians, but they were not enough to warrant him a place in the Test side. He was in good nick in as late as 1913 (he scored three hundreds), but his career came to a temporary halt when the First World War broke out.

The 39-year old Fane took part in The War and was promoted to Captain. Shortly afterwards he was awarded the Military Cross. At an age of 44 he scored 129 against Oxford University, coming back to First-Class cricket with a bang. Unfortunately, he never scored another First-Class hundred. He played on till he was 49, scoring 8 and 2 in his last match for HDG Leveson-Gower s XI against Oxford University at Eastbourne.

At an age of 79 Fred Fane was astonished to find his own obituary in Wisden. The almanac had messed up things, confusing Fred with his cousin Francis L Fane, with whom he shared the same initials. Coincidentally, Fred Fane Sr had also come across his own obituary years back. 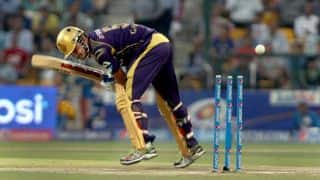