An XI of cricketers with one cricketer per birth nation: Afghanistan and Ireland are excluded from the list.

What about an XI of guests, then? Countries as exotic as Mozambique and Brazil have given us Test cricketers, but what about acquiring a full team of them? Let us leave India-born English cricketers or Zimbabwe-born South Africans aside for the time being and focus on birthplaces outside the Test arena.

There are several options to choose from, so let us put a restriction: not more than one player will be allowed per nation of birth. We also have to leave out the Kabul-born Salim Durani and several Ireland-born cricketers, for Afghanistan and Ireland s newly-acquired Test status have automatically disqualified them.

There is some doubt regarding Jackson s birthplace, but Rutherglen is generally accepted. Once that doubt is cleared up, Jackson becomes an automatic choice. Even if one keeps aside the romanticism (generally accepted as the heir to Victor Trumper, Jackson fell prey to tuberculosis at a mere 23).

But there is more to Jackson than sheer romanticism. While comparisons with Don Bradman were far-fetched, Jackson averaged 47.40 in his brief Test career a number that sits comfortably next to the two run-glutton Bills, Ponsford and Woodfull. Add to that those breathtaking shots and the courageous batting against fast bowling, and Jackson becomes a certainty.

Who better than Umar to partner the charismatic Jackson? Umar could bat for hours, wear bowlers out, then feast on them. In 1982-83 he became the first to score a thousand runs in a single edition of the Quaid-e-Azam Trophy. He once batted 685 minutes in a Test innings. And two of his three Test hundreds were double-centuries. History will also remember him as the first person to come up with allegations of match-fixing against his teammates.

Do we need to introduce Headley? His batting averages read 60.83 in Test cricket and 69.86 in First-Class cricket, third in each case in history (50-innings cut-off in Tests, 40 in First-Class). He went past fifty 15 times in Test and converted 10 of them in hundreds. Cricket remains indebted to his father, a worker at the Panama Canal construction site, sent him to Jamaica to learn English.

It has only recently been discovered that Bam Bam was a cousin of Everton Weekes. Bam Bam s career was cruelly cut short by World War II. He played only 2 Tests, scored 137 in 135 minutes at The Oval in his last innings, and averaged 57.67. The nickname is a result of the incredible power with which he hit the ball. He will also serve as the reserve wicketkeeper.

Others born in USA: Jehan Mubarak

An ideal combination of elegance and power, Lord Ted played spin beautifully, but really raised his batting against fast bowlers, unleashing one scintillating counterattack after another. Dexter averaged 47.89 (53.65 away from home), and 5 of his 9 Test hundreds were above 170. He was also a decent medium-pacer, averaging under 35 in Test cricket for his 66 wickets.

Brown was a better cricketer than his career numbers suggest. He had a brief career between the Wars, doing an acceptable job as a middle-order batsman who bowled both leg-breaks and medium-pace. Till that point he averaged 29 with bat and 31 with ball.

He was asked to lead England at 38, over 12 years after his previous Tests. He did a decent job of it despite a 1-4 thrashing in Australia. He led England to series wins in New Zealand and against South Africa at home. He continued to play for England till 42, even after being replaced as captain. His numbers obviously took a toll.

As Kent wicketkeeper, Jones had massive shoes to fill. He neither kept wickets like Alan Knott nor batted like Les Ames, but there is little point in comparing anyone with two of the greatest names in world cricket. He kept Chris Read, obviously a superior wicketkeeper, out of the side (how with a batting average under 24?). However, he did an acceptable job, especially in the historic 2005 Ashes.

There was more to the eccentric Edmonds than wearing a Swatch while fielding at forward short-leg and driving a Rolls-Royce to play for Middlesex. He played his cricket in an era dominated by fast bowlers; it restricted his role to that of a containing left-arm spinner. He did his job well for a while: his first 13 Tests got him 43 wickets at under 21 with an economy rate of 1.79.

Unfortunately, he could not sustain that, but still finished with a Test bowling average of 34 and 3 First-Class hundreds, and is currently a multi-millionaire.

Tanvir is among those Pakistan seamers who disappear as abruptly as they arrive. To begin with, when South Africa amassed 584 for 9 on his debut, Tanvir took 6 of those wickets, for 120. He took 8 wickets in his next 2 Tests, and 2 for 58 in the one after that. He was then dropped for a year-and-a-half, and dropped for good thereafter. Watch out for him, for he may make a comeback.

A knee injury forced Ironside to cut down on his express pace. He perfected on his new skill, often imparting what they refer to as banana-swing these days. He played only 3 Tests, took 1, 2, 3, 4, and 5 wickets in his 5 innings (though not in that order), and finished with an average of 18.33.

Traicos is of Greek origin and was born in Egypt. He was there when South Africa whitewashed Australia 4-0 in 1969-70. He was also there when Zimbabwe played their first Test, in 1991-92. He was 45, and he took 50-16-86-5 on this unparalleled comeback, securing a 149-run lead against an Indian side with reputation for playing spin.

Traicos also led Zimbabwe in the 1987 World Cup in between. He was a rank No. 11, but probably made up for that as a superlative gully fielder even in his forties. To add to his global image, he now lives in Australia.

Lall Singh played in India s first Test as a specialist fielder. He glided over the ground like a snake, complimented Wisden. The Cricketer wrote that he was about the best fieldsman in an exceptionally good fielding side. He could bat a bit, but really, fielding was his stronger suit. 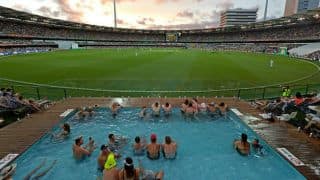