A spectacular bowling performance by Mumbai Indians helped them defend a modest score of 148 to win their maiden IPL trophy. 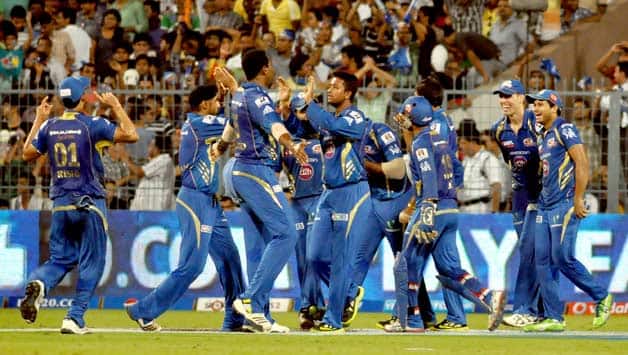 A spectacular bowling performance by Mumbai Indians helped them defend a modest score of 148 to win their maiden IPL trophy. Earlier in the day, the Mumbai Police had laid the foundations by extracting confessions from CSK team principal owner enthusiast, Gurunath Meiyappan: The onus was on the MI boys to deliver on the field now.

Himanshu Roy to Rohit Sharma: “We have done our bit. Now it’s upto you. If you don’t win, we’ll come after you too” #MIvsCSK


As though the build up to the match was not farcical enough – with BCCI President claiming that he wasn’t sure whether Meiyappan was the owner of CSK – SRK added to the comical proceedings during the T-20 Extraa Innings.

Just when you thought there couldn’t be a more farcical IPL final in history, SRK starts talking about Jab Tak Hai Jaan#MIvsCSK


BCCI President, N Srinivasan, managed to have a quiet word with India Cements Vice President, MSD, before the toss. In a bid to stem even the slightest suspicion of spot-fixing, the commentators were instructed to eschew certain clichés from their commentary repertoire in what was billed as the ‘all bets are off’ final:

For every quick wicket of Mumbai Indians, Gurunath Meiyappan will get one additional slap in lock-up #MIvsCSK


Skipper Rohit Sharma once again lived up to his reputation of a batsman with immense talent and potential, essaying a ‘blink and you miss’ 2 minute stay at the crease.

Himanshu Roy to Meiyappan: “You will get a new cell-mate today” | “Who?” | “Rohit Sharma” #MIvsCSK


Meanwhile, rumours were abuzz that some more CSK ‘principals’ may come under the scanner:

Can Himanshu Roy take away Laxman Sivaramakrishnan for a few questions? #MIvsCSK


Soon, Dinesh Karthik also departed, leaving his side struggling at 52 for 4 off 10 overs. With God not playing, MI needed a superhuman intervention. Cometh the hour, cometh the man. Pollard, threw his bat at everything the CSK bowlers bowled, steering his side to a position of safety. 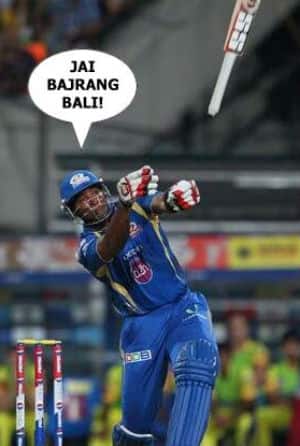 It wasn’t just the bowlers getting hit all over the stadium:

Meiyappan peers over, asks constable ‘what’s the score’? Gets another slap #MIvsCSK

CSK tried their best to keep Pollard off the strike as much as possible in the last over but couldn’t prevent the burly Trinidadian from facing the last two balls with the score at 136 for 9.

It seemed a competitive though gettable score but CSK’s top order simply caved in, including the in-form Hussey, thanks to some brilliant bowling by Malinga. Badrinath was promoted and sent in to stem the panic to disastrous consequences.

Subramaniam Badrinath: “Yeah right. Don’t let me bat all tournament and then send me at 2/2 in the fricking finals. Screw u guys” #Iplfinal

The CSK batsmen seemed hell-bent on perishing like lemmings jumping off the cliff one after the other. Wild celebrations in the MI camp ensued:

Meanwhile, a bunch of constables are dancing wildly in front of Gurunath Meiyappan’s cell #IPLFinal

After briefly pondering over whether he should send in Ravinchandran Ashwin or Chris Morris before him, MSD sighed and walked in at no. 8 and despite the dire situation, played with resolve.


However, it seemed a lost cause for CSK with 42 required off the last over. Even RP Singh couldn’t have screwed it for the bowling side from then on.

And then the celebrations began as the night sky erupted in dazzling fire-works. Rohit Sharma, after the customary ‘we did it for Sachin line’ also had the presence of mind to thank support staff:

Rohit Sharma: “We did it for Himanshu Roy” #IPLFinal #CSKvsMI

Ricky Ponting came in to bat exchange handshakes with the losing captain. The crowds, as expected, booed the BCCI administrators, though not all of it was directed at the beleaguered BCCI President, who insisted on giving away the trophy to Rohit Sharma.

Reporter to guy booing at Eden Gardens: “Are you booing CSK?” | “No, I am booing Ravi Shastri” #MIvsCSK

Mumbai Police Commissioner, Himanshu Roy, was conferred with the Nayi Soch award for the ingenuity of going for a small fish like Vindoo, which landed him a far bigger fish.

Later, Ravi quizzed MSD on reasons for the capitulation at the post match presentation ceremony: