The hyphenated XI: Sartre, double-barrelled surnames, and all that

The hyphenated XI: Sartre, double-barrelled surnames, and all that

These are the 11 most accomplished cricketers with hyphens in their names, not the 11 most spectacular names.

There was an era when double-barrelled surnames in England represented the cr me la cr me of the society. Whether that was true to some extent, it is no longer synonymous to elitism now. The latest entry in the pantheon, the spectacularly named Tobias Skelton Roland-Jones (who typically responds to the name Toby ), is not your ubiquitous 19th-century Earl who restricted himself to high circles and was often asked to lead teams by virtue of his amateur status. He is a fast bowler, something the nobility of yester years would have scoffed at.

And then there are the hyphenated first names. Not many of them have played cricket at the highest level, but unlike those with double-barrelled last names they can come from any socio-economic stratum, which provides a wider representation.

Among other things, Toby Roland-Jones (a fast-bowling all-rounder, yet another aspect that would separate him from the nobility of over a century ago) is also the inspiration behind this XI. Let us list these cricketers.

Note 1: These are the 11 most accomplished cricketers with hyphens in their names, not the 11 most spectacular names. Thus, though it will break my heart, I have to leave out Isabelle Koppe-V-Dishoek, one of the most remarkable hyphenated names in the history of civilisation.

Note 2: Some authors have used hyphens for Shrimp Leveson Gower and George Finlay-Bissett. I am leaving both out why add confusion when we already have an excellent XI?

Duminy s Test career never took off after that sensational second Test (at MCG in 2008-09) that brought Australia s astounding home run to an end in. Nevertheless, over 2,000 Test runs are not bad, especially when one can shift gears. He can compliment that with his part-time off-breaks.

This space is too short to chronicle the achievements of Heyhoe-Flint, the lady who well, was women s cricket. The ladies are still struggling to find a niche, but whatever they have achieved would not have been possible without the tireless efforts of Heyhoe-Flint.

But what about her career? Nobody had scored more runs than her 1,594 (at 45.54) at the point of time of her retirement. She was never the part of a losing Test. She once scored 179, at that point the second-highest Test score. She hit the first six in women s cricket. Nobody (with a 20-innings cut-off) averages more than her 58.45 in ODIs. Oh, on a side note, she helped organise the first ever Women s World Cup and led them to a win.

And then, she also played hockey for England…

You need to be reasonably biased to leave Inzamam out of an all-time Pakistan XI. Despite his poor running between wickets and un-athletic fielding, Inzamam will prove invaluable to this side, for he was so good a batsman that he made up for all his shortcomings. He absorbed pressure as much as anyone else (he was a part of two 1-wicket wins), could accelerate at will, and varied between a run-glutton and a super-run-glutton.

Misbah was probably not as good a batsman as Inzamam, but one must remember that the world never got to see a lot of him at his prime. He made up for that by stretching his career well into his forties, scoring runs with an appetite as voracious as men ten years younger. He also led Pakistan in a time of turmoil and nurtured them to the top spot in world cricket. And despite being ridiculed for slow batting, he ended up smashing the joint-fastest hundred of all time.

The best wicketkeepers often remain invisible behind stumps, which is something Watling is capable of. His swift, silent glovework makes him one of the most-respected glovemen of the era. He was also good enough to play Test cricket as a specialist batsman. If you think he is batting a place or two high in the order, I may remind you that his average while keeping wickets is in excess of 40.

Dr Herald Geoffrey Owen-Smith (aren t some full names awesome?) played all his 5 Tests on South Africa s England tour of 1929. South Africa lost the series, but Owen-Smith had an excellent outing, with 252 runs at 42. On the tour he had 1,158 runs at 36 and 29 wickets at 25 numbers that made him a Wisden Cricketer of the Year.

When he was not playing cricket he tried his hand at rugby, and ended up representing South Africa 10 times. He had some renown as an attacking fullback.

A decent batter and a medium-pace bowler, Hunter played only 2 Tests and 24 ODIs, but one must remember that she played her cricket when Australia had an exceptionally strong team. Her limited ODI appearances gave her 15 wickets at 15.40 (in World Cups her 8 wickets came at 9.25). And in all recorded cricket her batting average (26) was reasonably higher than her bowling average (20) the hallmark of a quality all-rounder.

Coulter-Nile is yet to play at the time of writing this piece, but he has shown he can be devastating in his short limited-overs career. He can be genuinely quick, and with not many big opportunities coming his way, he has evolved as one of many limited-overs specialists.

Fleetwood-Smith s international career lasted only 10 Tests, and his 42 wickets came at over 37. In his defence, however, it must be said that he played only 3 of them at home (19 wickets at 24); if one takes that torturous 1938 Oval Test away (the last of his career, where Len Hutton scored 364 and England 903 for 7), the average comes down to a not-too-bad 31. Additionally, his 597 First-Class wickets came at 23. Also, a Chinaman bowler is too cool to let go.

What is cooler than a Chinaman bowler? An underarm bowler who has played Test cricket. The last great underarm bowler, Simpson-Hayward bowled flat, fast off-breaks across 22 yards, toured South Africa with England in 1909-10, played all 5 Tests, and here is the punch-line took 23 wickets at 18. No Englishman took as many wickets in that series. In all First-Class cricket he took 503 First-Class wickets at 21 and was good enough to score 3 hundreds.

One of the numerous seamers who keep showing up in the Bangladesh national side, Al-Amin has probably accepted that he is not a Test cricket prospect. In limited-overs cricket it is another story: he averages under 25 at this point in ODIs and a shade above 15 in T20Is. He has been surprisingly ignored since the 2016 Asia Cup T20, where he took more wickets than anyone in the final stage.

Hailed as a teenage prodigy, Rainford-Brent could not live up to her potential as an all-rounder though multiple back injuries played a role in that. However, she continued to remain connected in multiple ways, as commentator and administrator. Also, she has three hyphens…

This one was probably obvious, but hey, Crusoe also had 464 wickets at 26. Apart from penning down some wonderful books on our squad, he will chip in as the greatest net bowler in history. Mithali Raj: It is for BCCI to decide on women's IPL 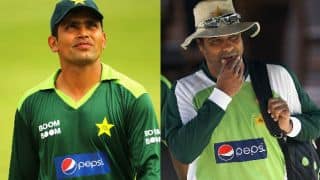