On May 23, 1775, Lumpy Stevens bowled three deliveries at John Small deliveries that would change cricket forever.

By the 18th century cricket had spread outside England. The English had played cricket in Aleppo, Syria before North America and India. In 1709 Kent and Surrey had played the first inter-county match. The first laws were laid down in 1744, but in cricket the wicket consisted of two stumps with a solitary bail atop. Then came May 23, 1775, when Lumpy Stevens bowled three deliveries at John Small deliveries that would change cricket forever. Abhishek Mukherjee recollects the incident.

It had been almost a century since the first cricket match outside England was played at Aleppo, Syria. Cricket had been regularised. From the days of village matches without much restriction, cricket had finally found a shape.

The first eleven-a-side match was played in 1697. In 1709 Kent played Surrey at Dartford Brent for 50, for cricket in that era invariably involved gambling (and match-fixing so much for the gentleman s game !).

The first laws of cricket were compiled in 1744. A little more than two decades later Hambledon Cricket Club was founded. If one goes by folklore, Tom Walker at Hambledon tried overarm bowling sometime between 1770 and 1790. What happened to him is not very clear.

The wickets, however, consisted of two uprights and a crosspiece . In other words, there were two stumps with a very long bail on top. Until that day in 1775, that is. But before we go into the details of the match, let us introduce the main characters of the day.

John Small of Hambledon was no ordinary cricketer. Not only was he the greatest batsman of the era, he also made it to John Woodcock s 100 Greatest Cricketers of All Time in The Times. His numbers in all recorded cricket read 3,401 runs at 16.35.

The enormity of these numbers will probably be lost among the uninitiated. It may suffice if I mention that reaching double-figures was almost always considered an achievement of sorts in those days.

In August 1769 John Minshull had scored 107, the first recorded hundred. Small would better that in July 1775, two months after the match in question. He would score a humongous 138. It can be safely concluded that barring Fuller Pilch, there was no batsman greater than Small till WG Grace came along.

All that aside, Small, along with Richard Nyren and Thomas Brett, had signed the declaration that restricted the width of the bat to 4.25 inches, as mentioned above. Of course, that was a result of the Monster Bat Incident, but that is another story.

A cobbler by profession, Small probably designed the first straight bat. Earlier bats were more of a cross between golf clubs and hockey sticks. Whether he was the first to design it is not clear, but we know for sure that he mastered the art of batting with a straight bat.

There is no doubt that Edward Lumpy Stevens was the first outstanding bowler in history.

Let us first run through what bowling used in the pre-Stevens era. The bowlers typically rolled the ball along the ground (think bowling alleys or Trevor Chappell s underarm). Some of them made it bounce, but no one actually realised why bouncing the ball might be turned to an advantage.

A Hambledon cricketer called Lamborn was, according to John Nyren, the first to twist a cricket ball. One might think of Lamborn was the first spinner.

However, Stevens took things to a different level altogether. In an era when bowlers rolled the ball along the ground, Steven flighted the ball; better, he actually controlled the flight and pace of the ball. Hours of practice also made him master accuracy.

Imagine the scenario: there was a group of bowlers who rolled the ball along the ground with no apparent danger; and there was one man, who tossed the ball up at the pace he wanted (he could bowl really fast for an underarm bowler), making it land with pinpoint accuracy.

One must also remember that the pitches were uneven those days. The word uneven deserves some description here. The cricket fields were typically used for farming. There was no well-defined pitch. Grass was mown using scythes. Sheep were used to clear a strip of land that would be used as the playing strip.

And Stevens, with his phenomenal accuracy, aimed for the resultant lumps on the pitch and often managed to hit them (which was probably the reason behind his nickname). Nyren wrote: that Stevens would uniformly select a point where the ball was likely to shoot.

For honest Lumpy did allow

He ne er would pitch but o er a brow.

Lumpy Stevens captured 305 wickets from 83 matches. The incomplete scorecards of the days do not record the runs conceded. In fact, the now-common bowler s sheet (overs-maidens-runs-wickets not maintained for a very long time).

Worse, for a major part of Stevens career, if there was a catch or a stumping, only the fielder or wicketkeeper found an appearance on the scorecard, not the bowler (even if there was a caught-and-bowled), which meant that the number of wickets taken by a bowler was almost invariably understated.

Confused? Today s scorecards read X caught Y bowled Z. In those days, it was invariably recorded as X caught Y, which meant that the name of the bowler (Z) was almost never documented.

If one takes this into account, Stevens wicket count would go up significantly.

The Artillery Ground, Finsbury was the home of London Cricket Club. In the pre-Lord s era, it was easily the most important cricket ground. Fittingly, the first match with a recorded gate money entry fee (6 shillings) was played at Artillery Ground in 1744.

Note: There are mentions of gate money in the 1730s as well, but there is no record. Cricket was probably the first sport to introduce the concept of gate money.

The structure of the match was similar to gully cricket matches of the contemporary era. Travel was not easy in the pre-railways era, and the roads were bumpier than the pitches. The roving cricketers of the era often had a day job as well.

As a result, getting 22 players together was not an easy task. As a result, single-wicket matches were common, as were matches with less than 11 players on a side. The match in question was a contest between Five of Kent and Five of Hambledon, which meant that it was a 5-a-side match.

It was a two-day contest, the broad outlines of which are mentioned in Arthur Haygarth s Scores & Biographies, Volume I. Thomas Daddy White (of the Monster Bat Incident mentioned above) played alongside Small for Hambledon in the match, while Stevens played for Kent.

Kent were bowled out for a mere 37. Hambledon responded with a formidable 92, Small alone scoring 75 of these. Kent did much better in their second outing, reaching 102.

Set 48 for a win, Hambledon were reduced to 34 for 4 when Small walked out as last man. With Stevens at his rampant best, Artillery Ground prepared itself for a battle of two champions.

Stevens, not unexpectedly, ran a ball through the defence of the venerable Small. The ball beat the bat and passed through the stumps, for there were only two of them with a long bail on top of them.

It was not an incident without precedence, but for something like that to happen in a crunch situation in a match of this importance made those present at the ground feel for poor Lumpy.

Note: Had there been punsters in the stands they probably called him Grumpy at this stage.

But then, it happened again: once again Stevens beat Small s bat; and once again the ball passed between the stumps.

And just when they thought Small could not get any luckier, for the third time in an innings the ball passed through the huge rectangle behind him. The stumps and bails remained intact.

There was no stopping Small after that. He collected the 14 runs without much fuss, and that was that.

Stevens was livid, and justifiably so. He had beaten the batsman fair and square, not once or twice but thrice, but was denied a wicket. He demanded the bowler be awarded a wicket if the ball passed between the stumps.

There was some protest from the amateurs of the era on the ground that the middle-stump would result in matches getting over quickly. Of course, one must remember here that the amateurs obviously belonged to the financially equipped section of the society, and as a result were almost always batsmen.

Nyren himself supported Stevens: It was but doing justice to the bowler; but I differed upon the question that it would shorten the game; because the striker, knowing the danger of missing one straight ball with three instead of two stumps behind him, would materially redouble his care; while every loose hard hitter would learn to stop, and play as safe a game as possible.

The laws were changed. The third stump was added. However, it was optional, and for a few years both two-stump wickets and three-stump wickets were in use till the former faded away with the course of time. 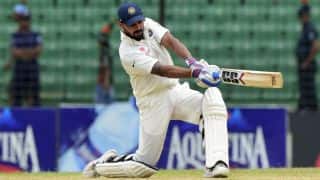