Harbhajan Singh goes for the unorthodox, trying to do a tennis forehand to a bouncer; when the ball comes too close for the smash, he simply lets the ball hit the bat and falls at his feet, as if it is the most normal shot in the world.

March 4, 2002. The crowd at Feroz Shah Kotla was scant, but more than what the organisers had expected the previous afternoon. India were running away with the match at 264 for 4 after Zimbabwe had put on 329, but Heath Streak and Ray Price kept Zimbabwe in the hunt, restricting India to a 25-run lead. Then Anil Kumble (did I mention this was Kotla?) and Harbhajan Singh skittled out the tourists for a mere 146. In fading light, unfortunately, India lost Deep Dasgupta, Sourav Ganguly, and night-watchman Kumble. Chasing 122, India were left tottering at 36 for 3 at stumps, Sachin Tendulkar having just arrived.

Tendulkar began Day Five in a hurry, racing to a quick 42. But then, it all started to go horribly wrong: Price had Tendulkar, and Streak got SS Das, both leg-before, the first plumb, the second, not so (the umpire was Asoka de Silva); and Rahul Dravid s painstaking tenure ended in a tame shot to gully.

105 for 6. India needed another 17. Harbhajan joined Sanjay Bangar at this stage, and survived what was a certain leg-before; Streak s ball would have hit middle-stump, but de Silva decided to gift India four leg-byes. It was de Silva s third error in a brief fourth innings.

Price bowled a maiden to Bangar. AV Jayaprakash gave a close decision in India s favour. The tension was mounting. Somehow, four overthrows materialised, followed by 11 dot balls. India needed only 6, but the pressure was unmistakable. Streak and Price, right-arm pace and left-arm spin, were not keen on giving an inch away.

So Harbhajan decided to put an end to all that. Two clean hits, for a four and a six, the second over the bowler s head, settled the issue. Just like that.

There is some kind of perverse pleasure in watching bona-fide sloggers bat. There is a certain brand of pride in their approach towards the art of batsmanship that is replicated by none.

Redundant details like the quality of the ball or the match situation seldom register in their minds. In their seemingly disdainful attitude towards that mythical textbook of cricket is hidden the kind of ecstasy seldom shown by their most illustrious teammates.

If they connect, their joy knows no bounds; if they do not, the ubiquitous grin is still there; and if they get out in the process, well, nobody really expected anything of them, did they?

But Harbhajan Singh is no slogger. Behind his apparently reckless approach lies a technique and adaptive skills beyond the eyes of the casual viewer. He goes for the unorthodox, trying to do a tennis forehand to a bouncer; when the ball comes too close for the smash, he simply lets the ball hit the bat and falls at his feet, as if it is the most normal shot in the world.

When he cuts loose, Harbhajan unleashes the most extraordinary of strokes, curious in appearance but often efficient in execution. Sometimes, there is method in what he tries to pass as madness. Sometimes, it is pure instinct.

But there is more. Despite the lack in orthodoxy, the head is always still. Given his footwork, he is hardly expected to connect, but he does. And when he does, when he plonks them, they often clear the ropes.

There is a beauty in it that is matched by none. When he hits them high and straight, take your eyes off the follow-through. Watch the beautiful arc into the stands instead.

Of course, there is no nerve when he bats. There never has been. Pace and bounce and movement are reduced to mere concepts that exist in books.

Remember Hamilton, December 2002? Shane Bond and Daryl Tuffey whisked out the Indian batsmen one by one, after the match finally got going on the second afternoon. VVS Laxman, the last of the big guns, fell for 23 as Harbhajan walked out to bat.

The score read 70 for 6. Bond s figures read 11.2-6-12-2. The next three balls disappeared for fours. Parthiv Patel played out a maiden at the other end. Two more boundaries followed at the other end.

On a pitch where Laxman had been the only one to reach double-figures, Harbhajan had raced to 20 from 7 balls, every single run scored off Bond. All this, in an era preceding Superbats.

How can you not like a batsman like that? Especially after the shot that flew through backward point, falling just short of the ropes one that barely rose a foot from the ground throughout its entire trajectory?

In many ways he defied logic. He was not supposed to get runs, I kept telling myself, but he somehow did, leaving me (and thousands of others) in utter disbelief.

Ganguly knew, of course. After Yuvraj Singh and Mohammad Kaif had added 121 in the famous NatWest Trophy final, he sent Harbhajan ahead of Kumble. With 59 needed from 50, surely India had the match under control if they did not lose a wicket why send Harbhajan?

But Harbhajan responded, and responded in style. In a partnership that lasted 35 balls, he faced only 13, happy to stay off strike and keep them out in his inimitable style. But when Paul Collingwood pitched one up, he was not willing to let that go: it was not a slog; he simply turned the ball with deceptively steely wrists to clear the ropes.

And then, just when India seemed to cruise home with 12 needed from 16 balls, he exposed all three stumps to smash Andrew Flintoff through cover, and leg-stump was pegged back. He had done his job, and had almost undone it, all with the same nonchalant expression.

On, and just to make me look like a fool, Kumble fell for a 2-ball duck.

Harbhajan s 2,224 Test runs have come at 18.22, but his strike rate reads 64.8. Of Indians with 2,000 or more Test runs, only Virender Sehwag and Kapil Dev have superior strike rates, while Krishnamachari Srikkanth is the only other Indian in the 60-plus territory.

Of these runs, 2,204 have come at positions 8 or lower in the batting order; only five men have scored more. Only Daniel Vettori and Kamran Akmal have scored more hundreds at these positions, and only Stuart Broad has got them at a faster rate with a 2,000-run cut-off.

One must remember here that he has also taken 417 Test wickets, and is one of only seven men to the 2,000 run-400 wicket double.

ODIs are different, for quite often the bowlers do not get to bat (and when they do, they often have to throw the bat around), but Harbhajan is only of 13 men to the 1,000 run-250 wicket double. He is one of 14 men with a thousand runs from positions 8 to 11 a list that unfairly includes Darren Sammy, Lance Klusener, Abdul Razzaq, and Shaun Pollock, all of whom pass as ODI all-rounders.

The best of the lot

It is not every day that you score consecutive hundreds at No. 8, but then, the usual rules do not apply to Harbhajan. What is not so well remembered is his first-innings 69 at Motera, a score he improved upon in the second, with 115. The only other person to score a hundred and a fifty from positions 8 to 11 in the same Test was the South African Eric Dalton, back in 1935.

Was any of those three innings Harbhajan s finest? Of course, the unbeaten 3 (not 30) at Chennai to finish off a historic series against Australia deserves a mention in the passing, but it certainly does not come close to the top.

What about the 32-ball 44 at Kandy in August that brought India back in the hunt after they were 154 for 7 against Chaminda Vaas and Muttiah Muralitharan, once Sri Lanka had posted 274?

What about the bizarre 54 at Trent Bridge a year later, scored out of 69 during his stay at the crease, when he reached fifty in 33 balls, then the second-quickest by an Indian?

In 2007-08, in that controversial series in Australia where he and Andrew Symonds made headlines for all sorts of wrong reasons, he had scored an uncharacteristically sedate 63 at the ill-fated SCG Test, and followed it with a near-encore (63, again) at Adelaide: will it be one of these?

When Australia came the following winter, he responded with 54 at Chinnaswamy and 52 at Nagpur, stitching together a match-winning stand of 108 with MS Dhoni in the latter. The world thought he had changed his approach to batting. His next innings was against England, who had scored 316. India were 137 for 6. Dhoni was at the other end.

The first three balls he faced went for four leg-byes and two fours. Steve Harmison and Flintoff were hit straight down the ground. The footwork was limited, but with a left hand so firm, who needed footwork anyway?

But the greatest of them all was probably the 40 at Newlands to follow the epic encounter between Dale Steyn and Tendulkar?

He left the bat dangling for a few milliseconds, but it seemed like minutes, even hours. Then he pulled it away so easily that he could easily have been Tendulkar, who must have watched the entire spectacle from the other end with awe or horror or both.

Steyn could not have been happy.

Morne Morkel bowled slightly short, but he was quick: Harbhajan made room (this was Test cricket on a lively pitch) and slapped over mid-on for four.

Morkel could not have been happy.

Harbhajan backed away again. Morkel followed him with a yorker. Nobody could have got that away, especially straight. But Harbhajan lifted his left foot and drove down the ground…

Steyn hit his off-stump. The bails did not dislodge. Steyn took a breather. Our man responded by lofting Lonwabo Tsotsobe into the stands over square-leg.

Back came Steyn. Harbhajan leg-glanced him to the fine-leg fence. Steyn pitched on off-and-middle. And Harbhajan gave it an almighty heave, the footwork non-existent, the timing perfect, the trajectory cutting a pretty picture across the Cape Town sky.

He held his bat there, despite hitting the fiercest bowler in the world in his fiercest form for a straight six over long-on. And when Steyn retaliated with a bouncer, he responded with a leave so lazy that it might well have been a housefly.

Steyn did get him with a bouncer, but only after Harbhajan had raced to 40.

But then, that has always been the case with Harbhajan the willow-wielder: a curious, often amusing side-story that intrigues the reader without taking anything off the main plotline. 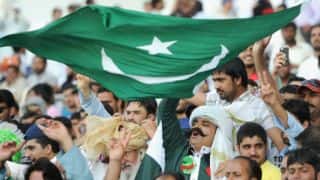 We will try our best to stage PSL final in Pakistan: Najam Sethi 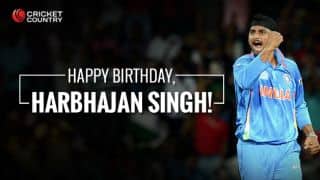