Umar Akmal discussed a range of subjects including his past performances and future for Pakistan, the new Chief Selector's decision to sideline him and cleared misconceptions regarding his fitness.

Chief Selector Inzamam-ul-Haq‘s decision to axe Umar Akmal and Ahmed Shehzad from the list of potential players for the upcoming England tour seems to have taken many by surprise. The 26-year-old Akmal in particular is a favourite among many fans who feel his attacking style of play is exactly what is lacking from Pakistan’s struggling limited overs sides. However the young batsman’s international career is now in limbo after his apparent disciplinary indiscretions, leaving his selection for the tour to England highly doubtful.

Umar Akmal’s credentials as a dangerous limited overs player are currently on display in England where he is representing Leicestershire in the Natwest T20 Blast tournament. His first game against Northamptonshire has already yielded fifty-two unbeaten runs off thirty-two balls and clearly highlights his immense potential in the Limited Overs format. Speaking exclusively to PakPassion.net, Akmal discussed a range of subjects including his past performances and future for Pakistan, the new Chief Selector’s decision to sideline him and cleared misconceptions regarding his fitness.

PakPassion (PP): You are back at Leicestershire after a short but successful stint last season. What are your aims for this season with Leicestershire?

PP: You are now 26 years old. Time to show some maturity on and off the field isn’t it?

UA: I think I have improved a lot when it comes to maturity both on the cricket field and off it. I feel that in the coming months and years everyone will see a more mature Umar Akmal. I particularly need to bat according to the situation more than I have in the past and that is definitely something I am focussing on.

PP: The Chief Selector wants to see plenty of runs from you in domestic cricket. Are you up for that challenge and to prove your doubters wrong?

UA: Absolutely. My aim is to make lots of runs for Leicestershire, then in the Caribbean Premier League (CPL) and then back home in Pakistan I need to make sure I get off to a flying start in domestic cricket for Sui Gas. I am aware that I need a strong domestic season behind me to impress the selectors and I am fully aware that I need to perform in domestic cricket to hopefully catch the eye of the selectors.

PP: According to the recent fitness tests at the National Cricket Academy (NCA), your levels of fitness have declined. Why is that and is that a concern for you?

UA: As professional athletes, we are always working hard on our fitness. Unfortunately, some quarters have insinuated that I am extremely unfit and not ready to play. This is obviously untrue. However, as a professional athlete, I will continue to work hard on my fitness.

PP: Do you think you get a rough deal from the media who see you as an easy target?

UA: I would urge the Pakistani media to support Pakistani cricketers and help us in taking Pakistan cricket forward. The media needs to stop highlighting every little situation and making a big deal out of it. We cricketers have families too and it’s not nice for them to see negative stories being brought up and highlighted in the media. Our families struggle to cope with such controversies which our media seem to thrive on. It not only hurts our families but these stories hurt us cricketers and ultimately Pakistan cricket. I need support from the media and if I get that then you will definitely see positive results.

PP: You find yourself now completely sidelined from international cricket. What’s going through your mind nowadays?

UA: Well the squads have not been announced as yet for the limited overs leg of the tour of England. Only the squad has been announced ahead of the Test series, so you never know. I live in hope, I always do. I’ve only wanted what is best for the Pakistan team and Pakistan cricket and I have always tried my best in whatever format I have been selected. I always pray that the Pakistan cricket team is successful whether I am in the team or not and that will never change. Let’s see what happens in the coming weeks and months as that will give me a clearer picture regarding my future.

PP: You made a sparkling 129 on Test debut but your critics say that as a batsman you have regressed. What’s gone wrong?

UA: My Test debut was a special moment for me. My brother Kamran was with me at the crease when I reached three figures and senior players like Mohammad Yousuf and Shoaib Malik were around me and they offered me so much support and guidance. I cannot express in words just how much confidence those senior players gave me. I was full of confidence back then and perhaps that is what has been lacking and why I’ve not been able to kick on as much as I would have liked regarding my performances for Pakistan. A lot of people had high hopes for me and I don’t want to let those people down in the future.

PP: Why is your confidence lacking despite so many opportunities for Pakistan?

UA: Confidence for a player comes from your captain, the management, the coaching staff, your cricket board and the media. We players just need confidence that’s all. I’ve played all over the world and have always tried to project my country’s name in a positive light. My country always comes first for me but sometimes I feel that I don’t get the backing and support and that affects my confidence. Sometimes playing in leagues around the world I am given more backing and therefore that boosts my confidence.

PP: Do you now see yourself as a Twenty20 specialist batsman?

UA: Absolutely not. My aim has always been and always will be to play Test cricket for Pakistan. I’ve always said that Test cricket is the number one format for me and I still maintain that. I always wanted to emulate the achievements of Younis Khan in Test cricket and still do. He’s a great example to me as a cricketer and as a human being. I also follow AB de Villiers a lot and he’s another great example to me. These are two individuals whose achievements I want to emulate and time is still on my side.

PP: When do you think we will see you back in Pakistan colours?

PP: Do you feel that the introduction of Mickey Arthur gives you a fresh opportunity to impress the head coach?

UA: I wish Mickey all the best in his new role and I hope his stint as head coach is a very successful one. Whoever the selectors and head coach pick to play for Pakistan, there will be no hard feelings from me and I wish all of them the very best.

PP: At this moment in time, based on what Inzamam-ul-Haq has said, do you agree your international future looks bleak?

UA: I just need to perform, get my head down and score lots of runs in whichever league I am playing in. At the moment my focus is on doing well for Leicestershire and then I will be playing in the Caribbean Premier League. After that I will play some club cricket in Pakistan and then the domestic season in Pakistan starts. I need to perform and catch the eye of the selectors; that’s all I can do and the rest is out of my hands.

PP: You’ve been labelled talented, reckless and irresponsible? Are those fair ways to describe your batting credentials?

UA: I will ask my critics to not compare me with others. Just look at me and what I have achieved compared to others. They will get the answer by just looking at my statistics and looking at the numbers of others; my statistics are much better. As for my fans I will say that you have always supported me through thick and thin and I need your support now more than ever. I always get a lot of confidence from my fans’ comments and appreciation. 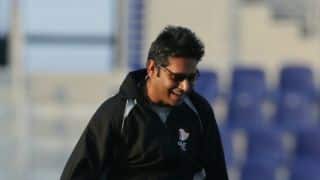