The miracle of cricket in Iran – and its popularity among women

The miracle of cricket in Iran – and its popularity among women

The sport was introduced to the country by the British oil workers in the 1920s.

Mountains, rocks, heat and dust – often nothing resembling a pitch, not even matting. Yet cricket in Iran is undergoing rapid improvement. What is more, the enthusiasm among women cricketers is really incredible. Arunabha Senguptalooks at the game in this middle-eastern nation, including the deeds of the amazing Narges Lafooti.

In a country of nearly 80 million people there are less than half a dozen decent cricket grounds. Often, games are played on dusty, rocky rubble, with an uneven stretch of overlaid concrete masquerading as the pitch. All the while the temperatures soar over 45°C. However, cricket in Iran is carried forward along a passionate, often counter-intuitive path.

The sport was introduced to the country by the British oil workers in the 1920s. With the nationalisation of the oil industry in 1951, the Abadan crisis struck and the Anglo-Iranian Oil Company found itself out of favour. In 1953, the famous coup – also known as Operation Ajax – was orchestrated by a collaboration of the CIA and the MI6, and it was little wonder that the handful of dedicated cricketers scampered back to their homeland. The game in the nation name to a grinding halt.

However, after the Iranian Revolution of 1979, there was the trickling inflow of immigrants from India and Pakistan. The game was reborn, played almost exclusively by the expats in Tehran.

Yet, it is in the south-east of the country, in the regions of Chabahar and Baluchistan, that the game continues in often miraculous circumstances. Battling the heat and an absence of equipment and facilities, the local youth carry on playing the game with a spirit that is indomitable. The players often have to rise at dawn and walk for a couple of hours across rocky terrains to reach the nearest location which claims to boast a surface approximately suited to a game. And they do so day after day.

Things are gradually looking up. The Iranian Cricket Association, once blasphemously under the nation’s Baseball Federation, broke away in 2003 and was granted ICC Affiliate status. Since then school cricket is on the rise with increased grants and improving infrastructure.

The most astounding feature of the game in the country is the development of women’s cricket. According to the 2012 Wisden Almanack, as many as eight of the 31 provinces of Iran boast women’s cricket teams. Especially in Kerman, a region bordering Iraq, there are more women cricketers than men.

If this seems incredible for an Islamic country, a closer look makes the reasons for the popularity of the game among the fairer sex more apparent. In simple terms, cricketing apparel is considered the most suitable sportswear for women and this tilts the scales in favour of the game. The full trousers and full sleeves along with a scarf around the head satisfy the demanding dress code requirements of the culture.

The country also witnesses the oddity of there being more qualified women umpires than men. The star among these officials is without doubt Narges Lafooti. The 35-year old is an amazing aberration, a female sporting miracle of the Islamic nation. She has played cricket and baseball at a high level, as well as leading and coaching the Iranian women’s rugby side. She is also a qualified lifeguard.

During her training course in 2003 – organised by the Asian Cricket Council and taught by former Pakistani umpire Khizar Hayat – she was the only woman alongside 20 men and had no on-field experience. Yet, she finished at the top of the class scoring 99%. In 2010, when she officiated at the Under-19 Women’s Championship in Singapore, Lafooti became the first Iranian woman to travel alone to an overseas sporting event. Apart from officiating in cricket matches, she also acts as a referee in rugby and conducts umpiring courses around the country.

The reasonsdriving the Iranian women to take up cricket, as given above, may be rather unappealing and rooted to conservative chauvinism. However, as Wisden put it, “as long as women like Narges Lafooti and her cricket cohorts are making names for themselves against the odds, it wouldn’t matter if they took the field in potato sacks. 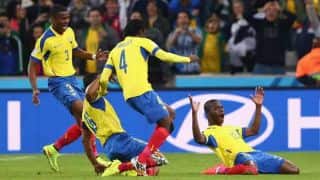