Humjee Break-Sheikh looks at a brutal, fierce strategy of CSK to strengthen their batting.

Chennai Super Kings (CSK) strengthened their batting line-up even more by including Brendon McCullum for Samuel Badree in the Eliminator of Indian Premier League (IPL) 2014. Humjee Break-Sheikh looks at a brutal, fierce strategy.

They were there at Brabourne Stadium on Wednesday night; not all of them had got a chance, but there they were, sitting in their dugout, shining their bardiches and battle-axes, polishing their maces and clubs, and doing goodness-knows-what. Mumbai Indians got Corey Anderson to open bowling, and the match was sealed then and there.

They could well have been characters straight out of Paradise Lost or Ramayana or The Lord of the Rings: a bunch of bloodthirsty ogres and demons, not hesitating to demolish the opposition, to smash them into pulp, to humiliate them to the point of psychological murder, to run their chariot over them multiple times to flatten them to non-existence, and finally, to obliterate them completely.

MS Dhoni; Suresh Raina; Brendon McCullum; Faf du Plessis; Dwayne Smith; David Hussey; Ravindra Jadeja; even Ravichandran Ashwin. They patrol their dominion with fierce determination, never hesitating to assassinate a single trespasser at the slightest trace of invasion. And once they know their terrain is secure, they move on to conquer other territories.

They do not believe in using the willow as a pen or a paintbrush; their powerful forearms and shoulders and biceps make the bats resemble sledgehammers more than chisels; the crunch of the bones become audible as the yellow on their armour get soaked in the fresh blood of the hapless enemy,whose corpses are left behind for the hyenas to feast on as they march on from one region to the next one.

They may go down at Wankhede or at Chinnaswamy, but be assured that they will not do so without crushing a skull or two. Eyes will be torn out, limbs will be ripped apart, innards will be extracted, and parents will cover the eyes of their young to keep them away from the gore as green will turn to red.

Watch out, George Bailey. The ogres of Chennai are here. They know no mercy. 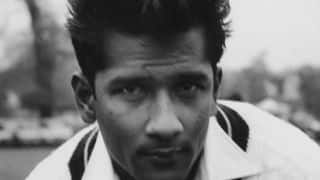