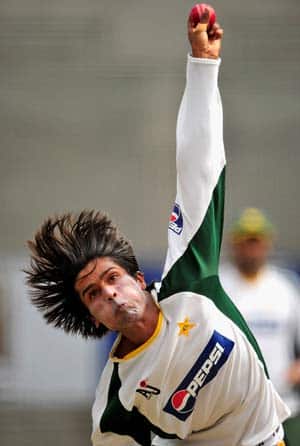 A rare talent placed young Mohammad Aamer (above) with the cricketing world at his feet, the fledgling hero of a nation. Corruption spat at those same feet. © Getty Images

Watching the fascinating interview between former England captain Michael Atherton and disgraced former Pakistan fast bowling protégé Mohammad Aamer stirred a number of emotions. Renewed disbelief that such events actually unfolded was just one, accompanied by anger that here sat one perpetrator of corruption within the most gentlemanly of games and, of course, sadness that one of the greatest fast bowling talents of a generation has been all but wasted.

Here’s the interview for those who missed it: Part 1 and Part 2. An enlightening interview at the least, Atherton accompanies Aamer through his early career, unparalleled success as a Pakistani teenage sensation and ultimately to that fateful day when those two pre-arranged no-balls were bowled at Lord’s.

Aamer produced a polished, if at times imploring performance, throughout. My rather more cynical side says that Atherton’s questions could well have been vetted and pre-observed by Aamer; such was the clarity of response and forcefulness of expression. A shred of liberal consideration that I somehow managed to retain countered that Aamer’s prison sentence allowed for reflection enough to have his story well regimented in preparation for further inquisitions.

A prevailing sense of empathy dominated the interview, a luxury Aamer would unlikely have been afforded had the inquisitor been a skilled Queen’s Counsel in place of understanding, sympathetic former cricketer in Atherton.

To my mind, forgiveness is being dished out in exceedingly heavy doses from too many quarters. Yes it has left me saddened, not only at the corruption of the sport I love but at the demise of a potential superstar, yet for me the focus is all wrong. Age, nationality and ability should be redundant in such circumstances, with many claiming that the young, naïve Aamer was misled. Maybe he was, but maybe Mervyn Westfield was, too, and you’ll see no such clamour for the lifting of Westfield’s ban.

One interview in which Aamer, to his credit, tried to give reasoning behind his actions and explain how and why he was manipulated by more malevolent figures does not warrant forgiveness, nor does a short custodial sentence and a temporary ban from cricket. Indeed, many would argue that a lifetime ban and nothing less would have been a more suitable punishment.

One could perhaps be excused for buying much of what this young man from such humble origins told us. After all, Aamer isn’t the first sportsman to have fallen after a swift and meteoric rise, and the sense that he was subject to manipulation persisted throughout. Despite much of this being true, Aamer’s words were not without their flaws. Atherton enquired as to whether he had received any money for agreeing to take part in spot-fixing, a suggestion that Aamer categorically denied. Further digging unearthed the revelation that Aamer had provided a mysterious contact known only as ‘Ali’ with his bank account details, a rather strange gesture if the transfer of money was not on the agenda, one would think.

Likewise, Aamer’s attempt to portray himself as a scared, naïve and altogether unwitting youngster amidst a world of adults fell somewhat short. Aamer was happy to admit that he knew that his involvement was entirely wrong and cheating the game. The very definition of naïve suggests that this should not have been the case. Rather than express his fears to the team management, Aamer opted to proceed, knowing exactly what he was becoming involved in, but not stopping for one second to consider the implications or indeed the possibility of being apprehended. It doesn’t instill a great deal of forgiveness, does it?

Compassion and forgiveness play a significant role in human society. The complex and diverse nature of the human being, so often confronted with bounteous choice, and possessing an unrivalled intelligence to act upon that choice, inevitably brings about mistakes in all walks of life. Most of those mistakes are forgiven, or the perpetrator given an opportunity to atone.

Aamer is undoubtedly remorseful for his involvement in this spot-fixing saga. And why wouldn’t he be? A rare talent placed this young man with the cricketing world at his feet, the fledgling hero of a nation. Corruption spat at those same feet, and the cricketing world swiftly decided that they were no longer a place under which it wished to reside.

As mistakes go, this ranked at the catastrophic end of the scale. The inner workings of human nature will one day see the majority decide that Aamer is ready to be forgiven. Some have already done so. For me, if he is indeed on the road to rehabilitation, Aamer must now see out his cricketing ban that runs until 2015, and only then by virtue of his actions and not pleading, remorseful words may this ghastly affair receive some closure, and forgiveness be imparted.