Shaun Marsh’s match-winning performance lit up Ahmedabad on Tuesday night as Kings XI Punjab overcame Rajasthan Royals in a Super-Over thriller. Marsh also completed 2,000 IPL runs during the game —a mark of his worth in the tournament. Nishad Pai Vaidya writes that this could be the turning point for Marsh as he aims to regain his spot in the Kings XI Punjab playing XI.

Shaun Marsh is the first Orange Cap winnerin Indian Premier League (IPL) history. Back in 2008, Marsh arrived in the IPL as an unknown quantity and outshone some of the biggest names in the sport. The youngster smashed 616 runs in 11 matches at an average of 68.44 with one ton and five fifties. A few weeks after that, he represented Australia in one-day cricket and has been a part of their plans ever since.

Marsh, however, hasn’t been the luckiest of cricketers. Frequent injuries have often marred his progress and have resulted in him having a stop-start international career. In the IPL, he is one of the few players who have stayed with the same franchise since the first season. Yet, he hasn’t been a regular in their side. It is perhaps one of the biggest mysteries in the IPL, for a look at his record would make it clear that he is amongst the best in the tournament.

Take the example of his latest knock against Rajasthan Royals. In a tough run-chase, Marsh was all class and gave Kings XI Punjab hope with his half-century. If that wasn’t all, he then turned it on in the Super Over to put them on course. Marsh was the hero of the day for Kings XI Punjab, getting them a much-needed victory after a couple of defeats. But, he wouldn’t have played the game had George Bailey not injured himself.

Marsh played only two games in the IPL 2014 and has now made a comeback in the fifth match for Kings XI Punjab this season. While his record and ability was never in doubt, the presence of other in-form players meant that he had to bide his time. Last year, Glenn Maxwell was the toast of the IPL with his exploits. David Miller has been a consistent force with the bat in the middle-order. Bailey has had a stabilising presence as skipper. And then there is Mitchell Johnson, whose presence is crucial to the bowling attack. With those four overseas spots taken, Marsh was always going to find it tough to break in.

Perhaps the latest knock may help him get a long run in the side. It puts the Kings XI Punjab management under a bit of pressure once Bailey comes back. If he continues to score runs, they will have to take a tough decision. The other day, they dropped David Miller and accommodated the all-rounder ThisaraPerera. Perhaps, Maxwell may have to make way for his countryman in the playing XI when Bailey returns. You cannot keep a good player out for too long. Marsh has had to warm the bench for a long time and this may be his chance to shine once again. 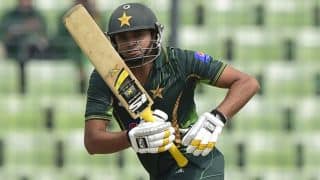