It s exactly 11 months today since India won the World Cup in what will remain an unforgettable night at the Wankhede Stadium. Yet, quite unbelievably, many of the team who successfully climbed cricket s Mt Everest have fallen by the wayside. 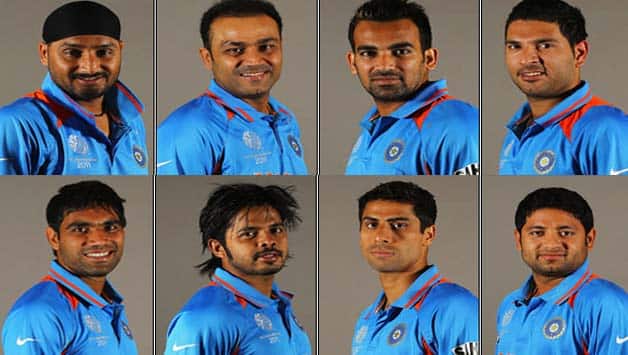 It’s exactly 11 months today since India won the World Cup in what will remain an unforgettable night at the Wankhede Stadium. Yet, quite unbelievably, many of the team who successfully climbed cricket’s Mt Everest have fallen by the wayside. And how! The disintegration of the team since that epic triumph is as sensational as winning the World Cup itself. How some of the world’s most talented cricketers could suffer such a collective and precipitous decline in such a short span is as big a mystery as the Bermuda Triangle.

Barring Virat Kohli, not one of the remaining members of the champion Indian team can feel satisfied about his performances since the epochal triumph.

Let us go through the track record of each member of the World Cup-winning Indian team since the quadrennial championship last April:

Has just one innings of note – a historic 219 against the West Indies. His eight other innings in this phase have yielded him a collective 111 runs. He has scored just 65 runs in the ongoing Commonwealth Bank (CB) series at a miserable average of 13.00. Though the chairman of the selectors, Krishnamachari Srikkanth, says that he has been “rested” for the forthcoming Asia Cup because of injuries, few are buying that explanation.

Sehwag could get away with his static foot for a major part of his career because of his sharp reflexes and sharp eyesight, but maybe – just maybe – that at the age of 33 the lack of footwork that made him such an imperious plunderer against all comers may be a thing of the past, especially on pacy overseas tracks and against genuine quicks.

Never in his 22-year-old fairytale career he has been subjected to such opposition from his countrymen. It’s almost blasphemous that the man who was revered as ‘God’ would live to see the day when so many people want him to quit – at least the ODI stage. Neither his age – he will be entering 40 next month – nor his form have helped him. If the elusive 100th international hundred hangs around his neck like an albatross, then his continuing failures in Australia is an unending sob story. Tendulkar missed all the ODIs between the World Cup and the tour of Australia, and in the seven innings in the CB series, he has average just 20.42.

He has been picked for the Asia Cup, but it’s widely perceived the selection committee’s munificence to help him get that 100th international century.

Present status: Very fortunate to remain in the ODI team.

He has had limited success since the World Cup, averaging under 40 in this phase. His 17 innings since the World Cup have not yielded a single hundred. In fact, he has not scored a century in the last 28 ODIs – his previous hundred came way back in December 2010. That’s an extended drought for someone who either opens the innings or bats one down. But he has come close a few times and has shown enough promise in recent times to suggest that he will finally break the dry spell.

Present status: Very much part of the ODI squad.

Amid the ruins of Indian cricket, Kohli remains the biggest shining star. If his hundred in the World Cup opener was proof of his big-stage temperament, then his heroics post the World Cup has made the world sit up and take notice of his precocious talent. The only player other than Suresh Raina to feature in all 28 ODI India has played since the World Cup, Kohli is miles ahead of the rest of the Indian team that did duty in the quadrennial championship last year. He has scored 1279 runs – way ahead of the second highest Indian run-getter, Raina with 719 runs. He has also scored four hundreds in this phase, while the rest of the squad put together has scored one – Sehwag’s 219. He has scored 121 boundaries, which is twice more than the second best – Raina with 60. He has also batted twice longer than any other Indian batsman. The Hobart epic he authored a few days back will go down in history as one the greatest innings in the history of ODIs. His elevation as deputy to Mahendra Singh Dhoni is a clear signal that the day is not far away when he will lead the nation’s cricketing fortunes as a commander.

Present status: The crown prince of the Indian team.

If the World Cup was a fairytale culmination of the biggest highs in Indian cricket history, then what has transpired since will go down as the gut-wrenching lows in the nation’s cricket saga. That it was the same man who presided over the contrasting destinies of Indian cricket is truly staggering.

Dhoni’s average of 93.28 is proof that his batting has not suffered amid the team’s disaster. He has scored seven half-centuries from 15 outings, which is commendable for someone batting at No 7. It may seem that he has toned down his aggression, but figures don’t support that. His strike rate is almost 90 and his 14 sixes have only been bettered by Raina, who has 15 – but from 27 innings. However, it’s the collective failures of the team in all departments that have let down Dhoni. Rumours of his differences with senior team members and, his much-criticised rotation policy have only added to his woes. But he has remained characteristically phlegmatic at all times.

Dhoni still remains at the helm and will lead the Indian team in the Asia Cup.

Present status: Continues to hold the reins of the team.

The principal architect of India’s World Cup triumph and anointed “Player of the Championship”, Yuvraj has not played a single ODI since that epic triumph. Yet, he is THE player the nation loves most after it was revealed that he played the World Cup with a golf-ball size tumour in his lungs which has now forced him to seek medical treatment – including chemotherapy – in the USA. The joie de vivre he shows in his tweets while keeping the nation posted of his battle for life has made him far more popular than he ever was.

Present status: Out of the team, recuperating from a life-threatening illness.

He has averaged under 30 since the World Cup and can consider himself very fortunate to remain in the squad for the Asia Cup. It’s possible that his unbeaten 40 that helped Kohli script a Riplesque run-chase at Hobart may have helped him escape the axe. Though Raina has reputation for destroying bowling on wickets that don’t afford pace and bounce, he remains extremely suspect in conditions helpful for fast bowlers.

Present status: Remains in the ODI squad – but just about.

Harbhajan played three matches on the tour of the West Indies and took four wickets and has not played since. His exclusion from the team came as no surprise considering his dwindling returns. Not only has he lost his place in both the ODI and Test sides, he also looks in danger of not playing again for India with Ravichandran Ashwin firmly establishing his place as a quality all-rounder.

Present status: Out of the Indian team.

In four ODIs since the World Cup, Zaheer has taken just five wickets. If the productivity was bad, then the cost per wicket is shocking – almost 40 per wicket. Despite the poor showing, Zaheer remains a bowler on whom India still shows faith. If there is one concern, it is his fitness – rather the lack of it. It’s quite possible that he may be forced to give up ODIs to prolong his Test career.

Present status: Out of the Indian ODI team. ‘Rested’, if you choose to trust the chairman of the selection committee.

Once among the fastest bowlers in the country, Munaf is unrecognisable from those early days of his career. In fact, Andy Roberts dubbed him a “spinner’! Munaf played eight ODIs after the World Cup and captured four wickets at 32.00. He got injured in England and returned to competitive cricket last month for Baroda.

After figures of 5-0-53-0 in the World Cup opener and 8-0-52-0 in the World Cup final, Sreesanth has come nowhere near being considered again for India. With Umesh Yadav, Varun Aaron, Irfan Pathan and Vinay Kumar doing enough to enjoy the confidence of the selectors, it is highly unlikely that Sreesanth will get a recall.

Present status: Out of the team.

After enjoying a lucky and extended tenure in the World Cup playing XI, Chawla is out of the reckoning.

Present status: Out of the side.

The semi-final against Pakistan was his last ODI outing. Not on the selectors’ radar since then.

Went on the tour of the West Indies and played five ODIs in which he scored 100 runs (avge 20.00) and took two wickets at 62.50. He could consider himself lucky to be in the side for the Asia Cup.

Present status: Makes a comeback into the Indian team.

Present status: An important member of the Indian side.