The goings-on at WACA motivated Phil DeFreitas to bowl remarkably quicker in a Perth Challenge 1986-87 league match, on January 5, 1987. Abhishek Mukherjee explains why.

Some of the most famous spells of furious pace had been triggered by injuries. Consider Frank Tyson s 6 for 85 at Sydney in 1954-55: would Tyson have series-changingly quick had he not been hit on the back of his skull by Ray Lindwall? Would Devon Malcolm have made South Africa history with 9 for 56 had Fanie de Villiers not dented his helmet?

We will never know. Some bowlers are motivated by pep talk from captains. Some others were charged up by conspiratorial teammates, who convinced him that the bowler was not scared of him at all. Wayne Daniel s Middlesex colleagues often did the same.

The 26th edition of America s Cup was hosted by Royal Perth Yacht Club. The event was celebrated with a sports festival that included a four-nation tournament hosted entirely at WACA, Perth. Australia and England, who were battling for The Ashes, were two of the teams, along with West Indies and Pakistan.

Australia lost every single match, while England won all their matches. In the other match, the first of the tournament, Pakistan (199 for 8) had stunned West Indies (165). They eventually met England in the final, where England won comfortably.

The incident is from the England-Pakistan league match, the last of the group stage. The match had little relevance, as the finalists had already been decided. The match is typically remembered for Rameez Raja s run out. Rameez had hit Mike Gatting to Bill Athey at mid-wicket, and had started to walk off, taking no notice of Tony Crafter s call or signal. Seizing the opportunity, Athey threw the ball to wicketkeeper Jack Richards, who ran him out.

But all that happened after Qasim Umar and Shoaib Mohammad negotiated a spell of surprisingly quick bowling from Phil DeFreitas of Leicestershire. It was the first international tour for Daffy , and he made an impact in both formats. This was his second ODI, after his 3 for 42 against Australia. He had missed the West Indies match, and was back for the Pakistan encounter because England had decided to rest Graham Dilley.

On that day, however, he left everyone confused with serious pace. They hadn t seen him bowl so fast, and there was no apparent reason for him suddenly gaining that extra yard of pace. In fact, it typically happens the other way round: Ian Botham was nursing an injury and was bowling slower than usual.

And it was Botham who explained the entire thing to Gatting, for Botham was next to DeFreitas when the team had jogged on to the ground.

You see, they had passed a television set on their way out, where DeFreitas had overheard a Channel 9 commentator read out the names of the England players. The list included one Phil DeFreitas, medium paced.

That had infuriated the youngster. He had kept murmuring I ll show them throughout the journey from the television set to the pitch. And once Gatting gave him first over, adrenaline made DeFreitas notch up pace he had never bowled at.

The figures, 9-1-24-1, do not tell the story or maybe it does: he was the most economical bowler from either side in the match.

As for the match, it turned out to be a close affair. When Chris Broad, top-scorer of the match with 97 (and Man of the Match) was seventh man dismissed, England still needed another 22. John Emburey and DeFreitas got them there with 2 balls to spare.

Man of the Match: Chris Broad. 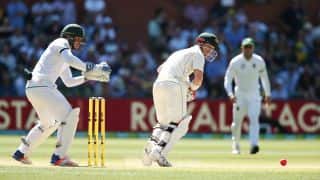