Anderson's mental steel helped him comeback after tears at Nottingham.

With England in an extremely tight corner, James Anderson fought against his own weakness to reach a well-deserved maiden Test fifty. Abhishek Mukherjee lauds the tail-ender who can look at the men up the order in the eyes.

James Anderson is England’s pace spearhead. He is the leading wicket-taker at Trent Bridgeand the only bowler to have taken 50 wickets at two English grounds.  Anderson is on his way to become England’s highest wicket-taker and arrive at the bowlers’ Mount Olympus — the 400 Test-wicket landmark.

Unfortunately, the Lancashire swing merchant cannot handle the short ball. Or rather, he could not; till Trent Bridge 2014.

Less than three wickets back he had fallen prey to a bouncer from Shaminda Eranga; it was the penultimate ball of the Test, and the dismissal had led to Sri Lanka a historic series win. He could not hold his tears back at the podium that day. He had let Moeen Ali down. He had let England down.

The world had figured out his weakness against the short, fast ball. Mitchell Johnson and Peter Siddle had in Ashes 2013-14. Angelo Mathews had taken the cue and had summoned Eranga to replace the reliable Rangana Herath for that one final over. And Anderson had, almost predictably, fallen prey; and he was crestfallen.

Somewhere in the past three weeks his fists were probably clenched in determination. The jaw gritted. He decided it was enough. He would not give in again. It was not the bowlers’ fault that he got out. It was he who could not handle short-pitched bowling. He had to overcome it.

India had scored 457. Bhuvneshwar Kumar and Mohammed Shami had put on a century-partnership for the final stand. England were seven-down for 202, but from the cosy warmth of the Anderson had seen Stuart Broad support Moeen. He walked out with his team on 298 for nine, the follow-on saved, but the deficit still substantial.

They tried pitching up. All three Indian pacers: then they tried bouncing. Anderson was ruffled by one from Ishant Sharma that took off. Memories of Headingley and Eranga came to mind. But Anderson who could not play short bowling, the same Anderson who was targeted by all fast bowlers, was determined this time.

Shami bounced. Bhuvneshwar, despite his harmless pace, bounced too. But Anderson was not to give in.

Sharma bounced again. Anderson uppercut with all the force he could muster. The ball flew over the slips and raced to the fence. He had now reached 37, his highest score.

Shami came back. Another short ball. Anderson shuffled. The ball rushed past MS Dhoni for another four.

The next ball flew to Murali Vijay at leg-gully. Vijay grassed it. The fifty was nigh. He had survived a chance. He was not going to throw this one away.

He was 47. Shami bounced again. This time he swatted it, all muscle and brawn, over mid-wicket. He was there.

It was the same man who had broken down at Headingley. Only more determined.

He is not the most talented one with the bat. He never was. But a victory is not necessarily against someone. For Anderson, it was a triumph over himself. 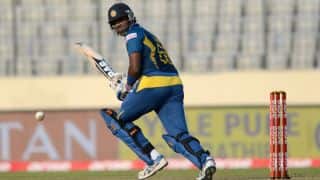 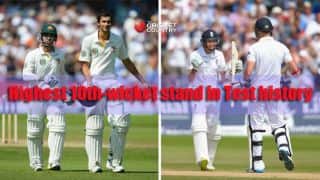