Thirteen Guests, a chilling country-house murder mystery that has a crucial thread of cricket running through its complex and tantalising structure.

J Jefferson Farjeon is one of the forgotten names of the Golden Age of Detective Fiction. That in itself is a mystery that would baffle the best of that era. Arunabha Sengupta writes about Thirteen Guests, a chilling country-house murder mystery that has a crucial thread of cricket running through its complex and tantalising structure.

Even in his magisterial The Golden Age of Murder, the defining book on the period now known as the Golden Age of English Detective fiction, Martin Edwards limits the mention of J Jefferson Farjeon to one flimsy footnote.

Jefferson Farjeon was prolific crime writer, whose play Number 17 was made into several films, including the Alfred Hitchcock version of 1932. But today, he is a largely forgotten name. And this is one of the biggest mysteries of that celebrated era — which would perhaps baffle all the redoubtable sleuths created by Agatha Christie, Dorothy L Sayers, Ngaio Marsh, Margery Allingham et al.

While the Crime Queens of that era — Christie, Sayers, Marsh, Allingham, and Josephine Tey — are still remembered with awe, and perhaps plenty of good reason, the male mystery writers of the between-Wars period seem to have had a lesser impact. Edmund Crispin is recalled more due to his macabre humour, John Dickson Carr because of the locked-room setups of impossible crimes, Anthony Berkeley for his iconoclastic approach. But a lot of them are ignored by history. Jefferson Farjeon happens to be one of the unfortunate ones.

One hopes that the recent initiative of British Library Crime Classics in republishing and popularising some of the gems of that era will revive the interest in brilliant and seldom remembered works.

While Mystery in White and The Z Murders are two excellent books by Jefferson Farjeon, in these pages we will take a look at Thirteen Guests.

The reason for that is simple. There is a delightful thread of cricket that runs through this supremely witty and intricate country-house murder-mystery.

The country-house mystery has a special place in British fiction. The seclusion that such ancestral places bestow on the plot, the ensemble of the wealthy British peer, his guests from the different strata of the rich, famous and talented; the assortment of butlers, maids, cooks, gardeners; the balls, soirees, hunts and cricket matches arranged for the inmates … all these combine into the ideal setting for crime within confined space and a limited number of suspects. Where the reader can pit his wits against that of the author.

Merging cricket with this setting is not uncommon. Alfred Tack penned the Test Match Murder with the entire plot surrounding the English cricket team housed in a country house.

But when the focus shifts to the cricket, and the theme of murder runs alongside it, the resulting plot is not often easy to handle. To merge a game of cricket into the story requires considerable skill, because not often can external factors be seamlessly associated with the action in the middle. And then, 22 cricketers needlessly extend the number of suspects, many of them duly becoming redundant to the plot. This can bog the writer down. It takes Dorothy L Sayer’s genius to integrate a cricket match into a murder mystery plot as she did in Murder Must Advertise.

That is perhaps why Ted Dexter and Clifford Mankins made a hash of Testkill, John Parker stumbled in the first pages of First Wicket Down when he awarded too many runs to one of the cricketers without adjusting his average. Even Tack’s rather more popular country-house mystery is palpably predictable and clichéd.

In Thirteen Guests, Jefferson Farjeon does not suffer from the burden of a cricket match at hand. He restricts himself to one cricketer. And hence, the moments cricket comes into the story are limited and handled with care and perfection.

Harold Taverley is a Sussex cricketer, who happens to be one of the guests of Lord Aveling at his country house. He has a batting average of 41.66 and is not really eager to discuss the bowling average. When John Foss accidentally arrives at the house with a badly sprained ankle, it is Taverley who gives him the gist of all the other guests staying at the place.

One needs to note the attention to detail. And numbers play such an important part.

John Parker, in First Wicket Down, put me off as early as in the fourth page when he jotted down the Australian captain Jack Viner’s career record as 79 Tests, 10,431 runs at an average of 43.95. Well, first of all 10,431 divided by 43.95 does not produce a whole number or even an approximate one. Besides, one needs at least 237 completed innings to score 10,341 runs at that average, and one cannot play that many in 79 Tests. If an author is not prepared to make that amount of effort to be correct in his detailing, he cannot expect me to plough through his stuff.

However, Jefferson Farjeon scores here. An average of 41.66 is not only plausible, but very, very common when one considers the decimal portion. If the number of completed innings is a multiple of three, this is very probable. Jefferson Farjeon takes the trouble to get his numbers right, and immediately wins my undivided attention.

As the plot races ahead, with every dialogue sparkling with wit and multiple meaning, cricket is used sparingly and well.

Nadine Leveridge, the enigmatic widow young Foss falls for from the beginning, describes Taverley as one possessing ‘a perfect off-drive’.

And for his part, Taverley tells Foss of Nadine’s former husband in the fascinating manner: “I liked her husband. He and I played cricket together. He used to tell me that the only moment he could forget Nadine was when he brought off a leg-glide. There’s something about a leg-glide. Then only he got perfect peace. After he’d passed through a particularly difficult time you could always bowl Leveridge lbw, he would try for that leg-glide. Even with the ball on the off-stump.”

Enough to hook any cricket-lover.

It is not that cricket plays a dominant role in the book. There are plenty of other characters, and very interesting ones. There is an ambitious politician, a famous film star, a caricatured female mystery writer (perhaps Jefferson Farjeon was making a point), a renowned artist, a journalist vacillating between fame and ethics, a professional blackmailer, a Chinese cook and a stern, likable inspector. There is a ruined painting, two murders and several accidents. All through the dialogue remains brilliant, the narrative taut and tantalising. Unlike many of his Golden Age counterparts, Jefferson Farjeon does not treat murder as a mere parlour game and a puzzle to be solved. The morbidity is captured as well.

However, the game does crop up from time to time as a vital cog in the wheel of a complex plot. A scorecard of a match between MCC and Somerset emerges from one of the drawers. And an act of fielding practice has a defining role in the unravelling of the final mystery, and thereby the devious twist in the tale.

It is a fascinating detective novel, recommended for any lover of the genre, particularly the ones that drool on the Golden Age of Detective fiction. And the thread of cricket makes it virtually unputdownable for the connoisseur of the noble game. 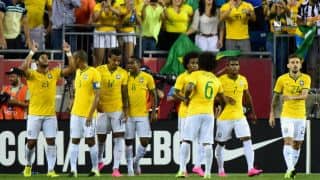