On December 8, 2011, the pupil emulated the master when Virender Sehwag bullied a hapless West Indian attack to help himself to a double hundred an ODI at Indore.

On a batting beauty at the Holkar Cricket Stadium, Virender Sehwag won the toss and elected to bat first against West Indies in the fourth ODI on December 8, 2011. With that move, the captain took matter in his own hands as he unleashed the trademark upper cut early in the innings.

While there were a few big shots at the start, one could see that Sehwag was determined to stay in the middle. However, that didn t stop him from pressing the advantage. Sunil Narine the mystery spinner was welcomed into the attack with a massive six over long-on in the 11th over. In a way it was a crucial blow as Narine had played a vital role in India s defeat in the previous game.

It was with that shot that Sehwag opened up and got into his typical attacking mindset. He made room on a few occasions to give himself the space to free his arms. Narine wasn t allowed to settle and Sehwag reached his fifty with a massive hit off the spinner.

Sehwag s first fifty took him 41 deliveries, but he raced to the next in only 28 balls. Having no regard for the impending milestone, he reached his hundred with a boundary something he has done a number of times in his career.

India were marching along smoothly and a record total looked imminent. As Sehwag continued to toy with the bowlers, some started sensing history. He was ready for anything thrown at him. If it was short and wide, he went after it with all power and if it was on the pads, he put it away with a delicate touch one wouldn t normally associate with him.

Gautam Gambhir and Suresh Raina scripted good fifties. Sehwag touched 150 in the 36th over and with 14 overs to go; the Sachin Tendulkar record was within sight. On 170, Sehwag got a reprieve as the West Indies captain Darren Sammy dropped a relatively easy chance.

At the start of the 44th over, the record was on the cusp. Ravindra Jadeja lost his wicket in an anti-climax, but nothing deterred Sehwag that day. He carved the next ball behind point to get to the milestone and record the highest score in ODIs.

With the milestone out of the way, the challenge was to extend the record and carry his bat through the innings. On 219, he was dismissed against the run of play when he holed out to the long-on boundary. The whole stadium stood up to applaud a great effort. Even the West Indies walked up to congratulate him on the milestone. 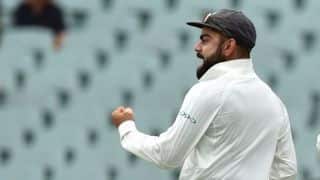 We'd be the worst blokes in the world if we celebrated like Virat Kohli: Justin Langer 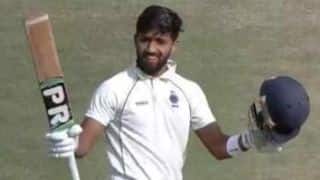