Imagine a side that opens the batting with Tendulkar and Ganguly, and bowling with Akram and Akhtar against a side that has Warne and Muralitharan bowling in tandem.

Sachin Tendulkar and Shane Warne are all set to renew their cricketing rivalry. Cricket All-Stars T20 league is all set to witness some of the greatest cricketers of the last 20 years in action in an unfamiliar territory in the United States. The concept of the series was ideated by the Master Blaster and the King of Spin. Both will captain their respective sides — Sachin’s Blasters and Warne’s Warriors.

There were speculations already about the teams. However, Tendulkar and Warne were at the Facebook office for a Q&A session where they revealed that the teams would be announced on Thursday. Before the champions do that, I present my thoughts on what I think the line-ups should be. The sides have been picked keeping player’s brand value in mind and also getting the right mix of players on those who have retired recently and those a while back. Must watch: Sachin Tendulkar and Shane Warne answer questions on All-Stars T20 from Facebook office

Sourav Ganguly and Tendulkar have been the most successful opening partners in One-Day cricket, and are two of the most popular cricketers. It makes a lot of brand sense for them to enthral the audience by opening the batting together for Sachin’s Warriors.

Lara, along with Tendulkar, enjoyed the status of the best batsman in the world. There are bound to be some goose-bumps watching Lara and Tendulkar bat together. Add Kumar Sangakkara to the equation. The argument of the best batsman of 21st century can rest, but won’t it be a treat to watch these three legends bat for the same side? Similarly, imagine a side that opens the batting with Tendulkar and Ganguly, and bowling with Wasim Akram and Shoaib Akhtar!

Many will argue why not have Wasim and Shoaib against Tendulkar and Lara, which will also remind them of India-Pakistan clashes. But All-Stars matches will not be about that. Imagine Tendulkar leading a bowling attack comprising of Wasim, Shoaib, Allan Donald, Saqlain Mushtaq and Daniel Vettori!

Name two of the greatest Test opening batsmen of 21st century. The two names that will top your mind’s search list will be Virender Sehwag and Matthew Hayden. Now picture them walking out to bat together for Warne’s Warriors. With these two at the crease, the baseball fans who have been frequent to the venues are bound to reminiscent the usual ‘home runs’. Then comes a batting line-up consisting of Ricky Ponting, Jacques Kallis and Mahela Jayawardene—giants from their respective nations — batting alongside another.

While Tendulkar’s team has the pace, Warne’s team rule in spin department. Picture Warne and Muttiah Muralitharan bowling in tandem with support from Courtney Walsh, Curtly Ambrose, Shaun Pollock and Glenn McGrath (yes, you have read that right).

Ok, now enough fantasising. We will only know the teams for sure on Thursday but whatever sides are picked, rest assured there is bound to be a memory shower and of course some exciting cricket! Read more on Cricket All-star series 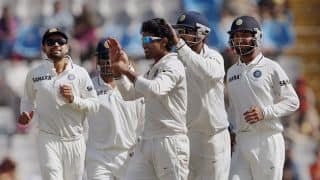