This story involves a genre of cricket generally referred to as Minor Cricket. Let us examine this a little more closely. For the uninitiated, Minor Cricket is a term applied to all cricket matches involving the minor counties, city, town and village clubs, universities (with the exception of Oxford and Cambridge, who play First-Class cricket), Armed Forces, colleges, schools, teams with a religious affiliation, wandering (nomadic) groups — in short, any team that does not conform to the laid down principles and rules pertaining to First-Class cricket. Now, that signifies a large canvas of cricket players.

Much of this form of cricket involves weekend games, although there are some Minor Cricket Leagues which feature mid-week games that are played in the evenings. While minor variations of the basic Laws of cricket are occasionally made for these games, these games are always played within the parameters of the Laws of cricket as we know them. Games are limited by the number of overs played, or, in some cases, by the time over which the games are played. Weekend games are usually limited to 60 overs a side, whilst mid-week matches are generally played as 20 overs a team. Many of these games are single-innings affairs.

Our narrative revolves around a particular match between Highgate School and Hendon Cricket Club, played at Highgate, on a Saturday, August 2, 1879, a one-day, single innings game.

The 1852-1892 Ledger under the custody of the Barnet Local Studies and Archives speak of this Hendon CC of Middlesex. The activities of the club are recorded as “recreational and sporting,” cricket featuring prominently among their sporting activities.

As far as cricket activities of Highgate School for 1879 are concerned, the archives mention that apart from the game referred to above, the school had played ‘home’ and ‘away’ against Dulwich College that year. Cricket, therefore, was a fairly regular sporting activity for the both teams at the time.

The protagonist of the tale is one Thomas Arthur Fison, born October 7, 1853 at Romsey, Hampshire, educated at Mill Hill School. By all contemporary accounts, Fison was a well-known figure in London Metropolitan cricket circles towards the end of the 19th century.

He was captain of Hendon CC for a long period of time, and an extremely hard hitter of the ball, usually scoring his runs at a rapid rate. A tall and imposing figure, Fison stood 6’2” in height and was said to have been a very good wicketkeeper.

The somewhat incomplete scorecard of the game in question is to be found in Arthur Haygarth’s Cricket Scores and Biographies, Volume 16. Although all the players of the Hendon team are mentioned by name, unfortunately, only three Highgate School members are named in the score-sheet.

The game in question had begun at about 3.15 pm on August 2, 1879. Although the result of the toss is not known, it is on record that Hendon CC batted first.

Fison, opening the Hendon CC innings with one W Bull (35), is shown as having scored 246 ‘retired not out’ out of a team score of 388 for 6. As always, the scorecard does not tell the whole story. The match notes reveal that this colossal score was made in rather less than three-and-half hours of actual batting, and did not include any boundary hits at all. Our hero hit a seven, 2 fives, 9 fours, 23 threes, and 40 assorted twos and singles, all the hits being run for.

It seems that he ‘retired not out’ because he had a train to board for the Continent at 6.45 pm. In parenthesis, it may be mentioned that the next highest scorer in this extraordinary innings was J Growse, who was run out for 40.

The cricket career of Thomas Fison would have made very interesting reading but for the unfortunate fact that this is the only one of his presumably numerous matches for which there is any documentation. Fison is, however, reported to have made 201 against the same opponents, at Hendon this time, in 1884.

Although Fison was said to have been a fit and energetic enough young man of about 26 when he had run all those 246 runs in 1879, one wonders whether it would have been possible had it been a really hot and sticky afternoon that August day. Perhaps The Almighty had lent a hand. The archives of the British Weather Bureau inform us that 1879 had been a very cold year with the average daytime temperature in the month of August being a very pleasant 14.5°C.

Thomas Fison passed away on April 14, 1911 at the relatively young age of about 58, leaving behind this wondrous deed for all cricket aficionados to treasure in the times to come. 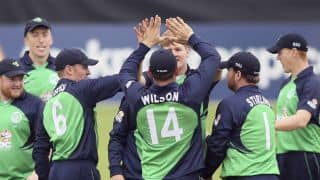