After a not-too-productive World Cup campaign, Ravindra Jadeja has had a disappointing run so far in the ongoing Indian Premier League (IPL) so far.

After a not-too-productive World Cup campaign, Ravindra Jadeja has had a disappointing run so far in the ongoing Indian Premier League (IPL) so far. Questions are now being raised on his selection in the playing XI of Chennai Super Kings (CSK). Suraj Choudhari has more.

Ravindra Jadeja is a slow left-arm orthodox bowler and acknowledged as an aggressive lower middle-order batsman. His role is to provide depth to the batting line-up and give the captain more option and flexibility.  Jadeja is among the core of the CSK players and have been retained since his induction in the southern franchisee. He hasn’t looked convincing in the 2015 edition for someone who has been in the International circuit for years. He hasn’t looked like the leader of a spin attack after the sidelining of Ravichandran Ashwin due to an on-field injury. Jadeja has failed to make any impression with the bat as well and his repeated failures are a huge worry for the CSK.

This anomaly is best explained when we focus on his recent form. In the recently-concluded World Cup, Jadeja managed just 56 runs with the bat in his five innings. With the ball, he picked nine wickets in eight innings at an average of 39.66 and an economy of 5.35. He failed miserably against Australia in the semi-finals where he didn’t manage to get a single wicket while conceding 56 runs. He floundered again with the bat when it mattered most.
In the nine IPL matches this year, Jadeja has picked five wickets and has been taken to the cleaners in most of the matches. His costly economy of 8.63 is testament to his dwindling abilities with the ball. With the bat, he managed to score just 96 runs at a strike-rate of 96. His weakness against the spin continued to haunt him in this season as well.
Pawan Negi has done reasonably well since his inception into the side. He was brought in as a replacement of Ashwin. Jadeja and Negi share almost similar all-round abilities, but Negi has pulled in his weight and grabbed the opportunity with both the hands. In the two matches Negi played this season, he has scored 42 runs at a strike-rate of 175 and clinched two wickets at an economy better than that of Jadeja. Irfan Pathan, another Indian all-rounder, who carries a good T20 reputation, might be itching to go out and fulfill the assigned role.
Dhoni has demonstrated enormous confidence in Jadeja’s potential and the selectors seem to have invested all their eggs in one basket. Perhaps it’s time to look beyond Ravindra Jadeja.

Is Sunil Narine losing his Midas touch with the ball? 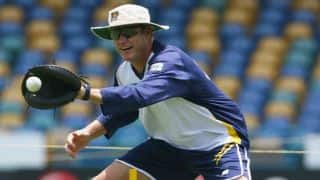