The questions that need to be asked: What is the role of the Team Director Ravi Shastri? Ravi Shastri doesn’t need to teach the boys how to wield the willow.

Ankit Banerjee dwells into Ravi Shastri and his KRAs following India’s loss in the first Test against Sri Lanka at Galle.

As the last nail in the Indian coffin was hammered at Galle, the cameras panned on the legend Kumar Sangakkara. At 37, playing his final Test at Galle, Sangakkara shot off the blocks for a 100 metres dash to be with his teammates. He was just handed a fabulous parting gift—an epic Sri Lankan victory that is now likened to the one India scored over Australia at Kolkata in 2001. [Also Read: Rohit Sharma squanders another opportunity; Cheteshwar Pujara best fit for No 3 slot]

The Riplesque act was largely made possible by Dinesh Chandimal, who was Sri Lanka’s VVS Laxman in the second innings. And, of course, Rangana Herath who cast a magical spell like Harbhajan did against Australia at Kolkata.

The Indians spoke of aggressive and fearless cricket going into the Test. India’s second innings run-rate of 2.24, in contrast to Sri Lanka’s 4.45 in the second innings, shows that the Indians did not translate their words into action. This is the same Sri Lankan side that lost to Pakistan very recently. Sri Lanka pressed for a win, while India were excessively defensive in their approach. The mindset Team India showed at Adelaide in December 2014 was missing. [Also Read: Will Shikhar Dhawan’s injury open the door for Gautam Gambhir?]

After losing night-watchman Ishant Sharma, India were two wickets down at 30 with 146 more runs to get. Rohit Sharma could have launched a counter-attack and taken the game by the scruff of its neck. For that matter, even Kohli could have been aggressive. But they were too dependent on standing firm on a pitch where the ball was turning square. Survival was tough and judicious attack was a wiser option. Once Rohit and Kohli fell, India were staring defeat in the face. [Also Read: Murali Vijay’s absence will hurt India in the first Test against Sri Lanka]

The questions that need to be asked: What is the role of the Team Director Ravi Shastri? Ravi Shastri doesn’t need to teach the boys how to wield the willow. The likes of Kohli, Rohit, Ajinkya Rahane and Shikhar Dhawan are accomplished batsmen on world stage. So, by the looks of it, Shastri is here to nurse their mental side of the game. Results, however, does not show him in good light.
A miserable one-day series in Bangladesh and now a lacklustre beginning to the Sri Lankan series, the Indians right haven’t really excelled under him. A galaxy of mistakes at Galle saw India lose, the goof-ups are being repeated and that is stressing out Indian cricket fans. Rohit has failed to evolve, Wriddhiman Saha has not learnt from his mistake at Adelaide and the top order, minus Murali Vijay, does not look good to counter a tricky situation upfront during a chase.

This team is brimming with potential. In conditions where the wicket offered copious spin from Day One, India had the machinery to take 20 wickets. Ravichandran Ashwin has the repertoire and has been in a zone. Amit Mishra can be a tormentor on a given day. Harbhajan Singh’s return added spice to the attack.

Decision Review System (DRS) would surely have won India the game, but that doesn’t solve the problems. It would be interesting to know how Cheteshwar Pujara feels when Shastri continues his praise of Rohit despite repeated failures. [Also Read: Enough of DRS drama; India now needs to look beyond]

Did Gary Kirsten have to enlighten the likes of Sachin Tendulkar, Rahul Dravid, Virender Sehwag, VVS Laxman and Sourav Ganguly on how to bat? Maybe, Kirsten knew that there were things he could learn from these veterans. He was a better manager than a coach. And that is the need of the hour for this Indian team.

In an interview, Tendulkar once said that under Kirsten they had the belief of breaching the 400-run barrier as well. This is exactly what is expected from Shastri, give lesser interviews and concentrate more on the team, for the team. Kirti Azad got it spot on when he wrote: “Shastri is a great talker, but talking alone does not deliver results. It is not surprising why the cricketers want Shastri to continue as mentor-cum-coach instead of a hard taskmaster as coach. The stage was set by the players of the previous years.” [Also Read: Ravi Shastri talks; Rahul Dravid delivers]

Shastri might have all the support from Kohli, but the question that Indian cricket fans and followers are keen on is: When will he start delivering results? 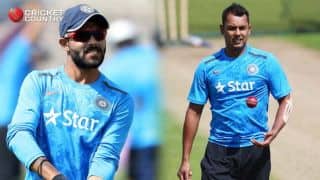