Tip Foster's 287 was the highest score in Test cricket at one time.

Reg ‘Tip’ Foster, born April 16, 1878, still holds the record for the highest score on Test debut. Abhishek Mukherjee looks back at the only man to have led England in both cricket and football.

There is a group of people who are so privileged that whatever they touch turn into gold. Reginald Erskine [Tip] Foster was one of them. He remains the only man to have led England in both cricket and football; he still holds the highest Test score on debut, the highest score by any batsman against Australia in Australia, and for a long time he held the record for the highest Test score. He was also a brilliant slip fielder. If that was not enough, he was a successful businessman to boot.

Foster came from a family of cricketers. Six of his brothers had played First-Class cricket for Worcestershire, though ‘Tip was the only one to play Test cricket. From 8 Tests he had scored 602 at 46.30 in an era of uncovered wickets; in all First-Class cricket he had scored 9,076 runs at 41.82. Of all pre-World War I Test batsmen with a 500-run cut-off, Foster ranks only behind Jack Hobbs and Stanley Jackson in terms of batting average.

Foster had an impeccable technique, and when he felt like defending there was no contemporary bowler who could get him out easily. However, he was essentially a strokeplayer, and could play his shots in all possible directions. Blessed with amazing hand-eye coordination and astonishingly supple wrists, Foster was next only to KS Ranjitsinhji in terms of elegance. He had mastered the leg-glance, but his trademark shot was the late-cut which he played so late that it seemed that he had plucked it out of the wicket-keeper s gloves.

Foster made his First-Class debut in 1897, and by 1900 he was hailed as one of England s most talented batsmen. In 1900 he scored 1,807 runs at 51.62 with 7 hundreds and 5 fifties, which was good enough to make him a Wisden Player of the Year next year. In the same year he scored 171 for Oxford against Cambridge setting a new record in the prestigious Varsity match. Within a couple of weeks he had scored 102* and 136 for Gentlemen against Players thereby being the first batsman to score twin tons in a Gentlemen versus Players match.

He continued his fine form the next year and scored 2,128 runs at 50.66 with 6 hundreds and 13 fifties. He was an obvious choice for the ship to Australia the next season, but business commitments kept him out of the tour. In 1902, the Warwickshire match was his only First-Class appearance till June, and he played only 10 matches that summer, and only 3 more in the summer of 1903.

Foster eventually made his Test debut in the Australian summer of 1903-04 at Sydney. After the English seamers bowled Australia out for 285, Foster took charge, coming out at 73 for 3. He added 192 for the fifth wicket with Len Braund, but England soon collapsed to 332 for 8. Foster, meanwhile, had gone past Charles Bannerman s 165 retired hurt the highest score on Test debut and Billy Murdoch s 211 the highest score in all Tests.

With eight wickets down, Foster gave Australia the charge. He added 115 with Albert Relf and then 130 (a new 10th-wicket record) more with Wilfred Rhodes in 66 minutes. The hitting was brutal, and Foster had increased the world-record score by many a mile, scoring 287 in 419 minutes.

Though Victor Trumper scored 185, Rhodes dismissed Australia for 485, and England won by 5 wickets. The Test proved crucial, as England won the Ashes 3-2. Foster scored 49 in the first innings in the second Test at Melbourne, when a severe chill prevented him from taking any further part in the Test. In the dead rubber in the fifth Test at Melbourne, Foster top-scored in each innings of a low-scoring Test, where he scored 18 out of the team s 61, and when he was promoted to open, 30 out of 101.

Despite his performances, this would remain Foster s only Ashes series.

Even after his success Down Under, he made a solitary appearance that summer, once again due to his business commitments. Back next year after not playing First-Class cricket for a year, he returned with a bang, scoring 246 not out against Kent in his comeback match. However, he played only 6 more First-Class matches that year, and two more the next year, which included a 198 against Somerset.

On the basis of his consistent performances, Foster was selected once again, this time to lead England in the home series against South Africa. He played all the three Tests. He scored 51 and 35 in the final Test at The Oval which also turned out to be the last Test of his career. However, this made him the first and only till date player to lead England in both cricket and football.

The selectors asked him to lead England to Australia for the next Ashes tour, but he declined again due to business commitments. He skipped the 1908 and 1909 summers completely. When he came back in 1910, he scored 133 against Yorkshire. It remained his only match of the season. He played in only one more First-Class match against the visiting Australians in 1912, scoring 26 in the only innings he batted.

Foster made his football debut for the Corinthians, and also turned up for Old Malvernians. In 1900 he was selected to play for England against Wales as an inside-forward.

In his second match against Ireland (also CB Fry s only football match for England: he played as a fullback), England got off to a 1-0 lead in the ninth minute, thanks to a goal by Tom Crawshaw. Foster then scored twice in the 81st and 83rd minutes. He scored another goal in his next match, this time against Wales.

Foster played his fourth match against Scotland. He eventually got to lead England in what turned out to be his last football match. The match ended in a 0-0 draw.

Foster suffered from acute diabetes, and he tried a recovery by taking a trip to South Africa. It did not work. This exceptionally gifted person passed away in London, less than a month after his 36th birthday. 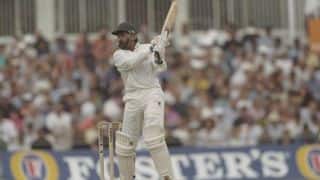 Saleem Malik: The man who batted with velvet gloves squandered it all by succumbing to the Cult of Mammon