How seriously do Indian part-timers take their bowling? Have others emphasised on the need to practice the art at the nets on a regular basis? Until the fourth One-Day International (ODI) of the ongoing series against Sri Lanka, the Indian bowling failed to perform as a unit with individuals shining in patches. Mahendra Singh Dhoni opted to play five bowlers in the first three games – a move that didn’t threaten to thwart the Sri Lankan charge. However, for the fourth ODI, India opted to drop the extra bowler and play Manoj Tiwary – who is primarily a batsman by trade. The Bengal batsman dazzled with the ball as his four-wicket haul played a major role in restricting Sri Lanka to 251.

If one analyses the scorecard of the fourth ODI, one would find that the part-timers – Manoj Tiwary, Virender Sehwag, Virat Kohli and Rohit Sharma – did a fantastic job. In fact, with the exception of Ravichandran Ashwin, none of the frontline bowlers completed their quota of ten overs. Zaheer Khan, Irfan Pathan and Ashok Dinda bowled six overs apiece with the part-timers sharing the rest and the fifth bowler’s quota. Dhoni mentioned at the presentation that he encouraged Tiwary to bowl in the nets as he felt that he could deliver the goods as a bowler. In his six ODIs before this game, Tiwary had bowled 10 overs spread over three innings – a number he doubled in his last appearance.

The question is: How seriously do Indian part-timers take their bowling? Have others emphasised on the need to practice the art at the nets on a regular basis?

A very pertinent example in this regard is Yuvraj Singh. The southpaw was always a part time option as his left-armers weren’t rated very highly for a major part of his career. He would bowl every now and then, but not on a regular basis. However, as the 2011 World Cup approached, Yuvraj took his bowling very seriously and put in the hard yards at the nets. His all-round performance in the mega event was truly phenomenal as he not only scored runs but also bowled productively. His spells in the knock-outs were wicket-taking and crucial to the ultimate result of the game. Although India didn’t have a genuine all-rounder in their ranks, Yuvraj filled in tremendously well and the Man of the tournament award was an acknowledgment of his performances.

Now, here is a case of a man who was renowned for his batting and worked on another promising aspect of his game. It was a move taken with the larger picture in mind and all the hard work paid off. In the past, India have had a number of batsmen who could bowl – some of them have even recorded a few game-changing spells. These players bowled in short periods and never took their bowling to the next level. We aren’t suggesting that they should have tried to become all-rounders, but a strong back-up always helps in one-day cricket.

The likes of Sachin Tendulkar and Sourav Ganguly have rolled their arm over to great effect a number of times. There were occasions when India turned to them to break a partnership even as the frontline options failed to trouble the batsmen. While Ganguly has exactly a hundred wickets to his name in ODIs, Tendulkar has recorded over 150 scalps. Both men bowled fairly regularly during their careers, but slowed down as they aged. Interestingly, Ganguly picked up his 100th wicket in his last ODI. His super-human feats against Pakistan at Toronto in 1997 are etched in the memory of Indian cricket fans.

Tendulkar has bowled a number of memorable spells and doubled up as a part-timer in the 90s. Who can forget his last over in the Hero Cup semi-final against South Africa or even his two five-wicket hauls? During the later stages of his career, injuries caught on and he had to reduce his workload. Steve Waugh, the former Australian captain has one complaint against Tendulkar. In a newspaper column a few years ago, he wrote, “If I have any criticism it’s that he did not give his leg-breaks any importance. I always thought he could spin the ball a lot more than many regular spinners, and could have claimed a 100 Test sticks if he had put his mind to it.”

Fair point one may say as the maestro has only 45 wickets to his name in the long format.

If one goes further back in time, we have the examples of Krishnamachari Srikkanth and Mohammad Azharuddin. Both men are remembered for their feats with the willow, but they made contributions with the ball as well. Srikkanth picked up two fivers in an ODI series against New Zealand in 1988. However, in a 146-match long one-day career, he gave expression to that talent in only 33 innings – clearly underused. Azharuddin used to bowl useful seam-ups in the first half of his career. In the last decade of timeline, he bowled only one spell – which was just two overs long.

Then we have the intriguing case of Ajay Jadeja. In an ODI against England at Sharjah, he bowled an over that altered the course of the match. His three wickets in those six deliveries derailed England – who looked on course to chase down the target at one stage. Then again, it was a spell out of the blue as he did majority of his bowling in his younger days.

Surprisingly, Rahul Dravid too has bowled a bit. In a series against South Africa in 2000, his off-spinners were on show in three games. In one of the ODIs, he bowled a spell of two for 43 in nine overs when India had conceded over 300. That series was the last time he ever bowled in one-day cricket.

When one looks at all these cases, one would realise that Yuvraj’s approach has been the most refreshing. Ganguly and Tendulkar too did their bit, but it isn’t clear how seriously they took their bowling later on. If Dhoni can persist with Tiwary and a few others bowling in the nets on a regular basis, India would have good back-ups to the main bowlers. Even if one of the frontline bowlers has a bad day, these men can then come in and probably make a difference. As Dhoni said, “If we don’t get a perfect all-rounder, we are comfortable playing seven batsmen.”

Graeme Smith says current South Africa side is the best 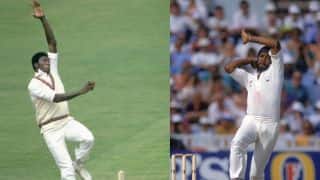