To bat or not to bat? Misbah-ul-Haq, Michael Clarke and others who do not enforce follow-on

To bat or not to bat? Misbah-ul-Haq, Michael Clarke and others who do not enforce follow-on

There have been just three instances of a team actually losing a Test after enforcing the follow-on in over 2,200 Tests.

Pakistan’s Test captain Misbah-ul-Haq was in a position to enforce follow-on on thrice last season. On each occasion, he decided against it. While it was perceivable that generally the emotional followers of cricket in Pakistan would call that ‘defensive’, it surprised me then that even the pundits of the sport criticised him. His ‘intent’ was questioned. Similarly, Michael Clarke did not make England bat again at Lord’s in the second Ashes 2015 Test, and sparked statements of mockery, particularly from Indian cricket followers who naturally referred to Kolkata 2001. Read: Michael Clarke enforces follow-on for first time in career as captain

It is very easy to be carried away by the prospect of an innings win but it would help to remember that there have been just three instances of a team actually losing a Test after enforcing the follow-on in over 2,200 Tests — which amounts to less than 1 per cent.

In each of those three cases, the team that won feasted on tired bowlers and some poor captaincy by the losing captain. In the first instance, Australia made England bat again (still early days of cricket) after bowling around 150 overs; George Giffen was made to bowl 75 overs to match his first innings number in a timeless Test. The other two Tests involved superhuman performances from Ian Botham, Bob Willis, Rahul Dravid, VVS Laxman and Harbhajan Singh.

However, taking nothing away from those five, the results also owed a lot to — to use a rather harsh term — mistakes made by the bowling captain. At Headingley 1981, Kim Hughes kept up with his fast-bowlers bowling to aggressive fields and Botham and Graham Dilley kept hitting them out. An over or two from Ray Bright could easily have changed things. Even then, a target of 130 was not a big deal; but the Australian batting, dubbed one of the worst to tour England in ages by Ken Piesse, collapsed to Bob Willis on a wicket that was increasingly developing uneven bounce.

Similarly, at Eden Gardens in 2001, Australia made India bat again on the third day on a wicket that was playing its best. They hoped the patience of the Indians would fail as they faced a constant wide outside the off-stump line. They did not. Even then, the Australians could easily have saved the test match but foolishly went about chasing the target and lost heavily.

What cricket followers do not realise is that a lot has changed over the past few decades. Most critically, there are no rest days. Consider Hughes’ decision, which was perfectly justified in terms of his bowlers’ workload: He enforced follow-on after England had been bowled out in just 50 overs and had a rest day to follow immediately after his decision. Steve Waugh, on the other hand, assumed that India at Eden Gardens, would collapse just as easily after the enforcing the follow-on early on the third day without worrying about some of the ground realities that were mentioned earlier. Read: VVS Laxman and Rahul Dravid transform Eden Gardens into cricketing Heaven — A sight fit

Misbah’s decisions should be taken in that vein. In the two Tests against Australia and New Zealand, the follow-on was not enforced after bowling Australia out in around 70 overs on Day Three through a limited bowling attack on a flat wicket. With two days and a quarter to go, Pakistan chose to bat on and won with loads of time to spare. On the same ground against New Zealand some days later, the follow-on was again not enforced on Day Three. Pakistan had a similarly limited, inexperienced bowling attack. In both cases, there was no rest day to follow that third day. The decision against Bangladesh was more straightforward, as it became obvious that Misbah clearly intended to give his bowlers some rest as Pakistanis batted for only around 40-odd overs and got about their business on the third day. Read: Misbah-ul-Haq’s unnoticed imprint on Pakistan

Things have changed over the course of time. Bowlers get injured more frequently than they did back then. Rest days have gone. Results have become more frequent. Scoring rates have increased. Enforcing follow-on in 1980s and 1990s was plausible, as the decision-making time came on the third day with a rest day to follow (or at times on the fourth day when time was at a premium). This was also an era where anything above 2.5 runs an over was considered quick scoring. This is not the situation now. Teams bowl the opposition out on the third or even on the second day and most captains recognise the value of preserving their bowlers and letting them loose on a crumbling wicket.

At the end of the day, the ultimate goal is to win. If enforcing follow-on increases that probability or presents a more viable option, then doing so helps. If not, it should remain what it is: An option rather than an obligation and should never be taken as a means to judge a team’s manliness or ‘intent’.

Perhaps the sensible among us would take cue from what Arjuna Ranatunga had to say when asked about why he opted to bowl first at The Oval in 1998. “The bowlers would be too tired,” he said implying that he would have had been in a position to enforce the follow-on. He opted not to by bowling first and Muttiah Muralitharan, with 40 per cent of all Sri Lankan overs and 16 wickets, ensured a crushing ten-wicket win. There was nothing defensive about it. There was nothing defensive about Misbah’s tactics too as Pakistan completed three of their biggest wins ever (221 runs, 356 runs and 328 runs) with ample time to spare.

Contrary to the popular belief, not enforcing the follow-on was not made fashionable by the Australians but by the Bob Woolmer-Hansie Cronje era South African team who, as a norm, would bat on. Woolmer identified the potential workload his prime bowlers (remember, they were fast bowlers), particularly Allan Donald, faced and sought about devising strategies that would ultimately see Donald emerge as the best fast bowler of the era.

Pakistanis, on the other hand, can console themselves that they had their opponents on the defensive — particularly in New Wanderers in 1995 and 2013 where they lost by 324 runs and 211 runs respectively. Indeed, at Bellerive (2010) and WACA (2004), too, the defeat margins were 231 and 491 runs respectively. As for Misbah, while he can be criticised on a lot of counts, blasting his follow-on decisions, especially when he led Pakistan to big wins with plenty to spare is at best preposterous.

(Kamran Wasti is a mechanical engineer from Lahore with a bit of interest in cricket. He writes at http://grassywicket.com) 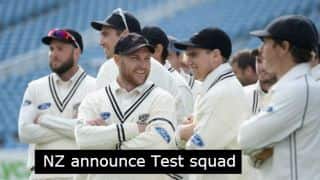