Tom Moody, born on October 2, 1965, is an Australian cricketer-turned-coach who was a batting all-rounder in his playing days. Jaideep Vaidya glances through the career of the two-metre 'long' Moody. 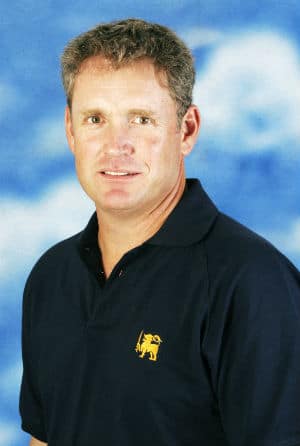 Tom Moody, born October 2, 1965, is an Australian cricketer-turned-coach who was a batting all-rounder in his playing days. Jaideep Vaidya glances through the career of the 2-metre ‘long’ Moody.

At 6’7’’, he had the height; he had the physique as well. Contemporaries like Curtly Ambrose and Courtney Walsh, and even his own countryman Bruce Reid had shown the way. Only Joel Garner had stood a couple of inches taller than him, and look at the devastation he had caused. Tom Moody had all the necessary gifts to emulate the abovementioned and develop himself into a lethal pace bowler. However, the Western Australian chose to become a batsman, well… a batting all-rounder to be precise, who bowled medium-paced swing!

Now before you think that it was a waste of god-given gifts, let’s get it clear that Moody was not a half-bad player doing what he did. He was an aggressive batsman who, in his career, batted in various positions in the batting order, mostly occupying a spot in the middle-order. He loved playing the cover drive and straight down the ground, and took immense pleasure in waltzing down the track and carting slow bowlers into the stands.

He did not have the numbers to back the claims, having played just 8 Tests for Australia between 1989 and 1992, and just 76 One-Day Internationals (ODI) in a 12-year international career between 1987 and 1999, but he was a utility player for Australia.

Even though his one-day figures are anything but spectacular — he did not manage to score a single century, had averages of 23 with the bat and 38 with the ball — Moody was still a handy player who contributed here and there when required. Usually, he was one of the last pieces to fit into the jigsaw that was the team composition and was picked due to his all-round ability and grit.

He had the capability to annihilate a bowling attack on his day, while his swing bowling was just about good enough to fill in the middle overs of a one-day match. Even though he was no Garner, he had enough in his deliveries to do this:

Nicknamed ‘Long’ for obvious reasons, Moody began his First-Class career in 1985-86 season with Western Australia in the Sheffield Shield. He also played for Warwickshire in England for a season, before permanently shifting base to Worcestershire. As a youngster prior to becoming a professional cricketer, Moody was always a good athlete and loved the long jump. He also took to Australian Rules Football before finally making up his mind on playing cricket. He played for the Midland Gilford team in Western Australia Grade Cricket.

While his First-Class career progressed, Moody was imbibed into the Australian one-day setup. In his 12-year career, he won 2 World Cups, in 1987 and 1999, making him the only Australian cricketer other than Steve Waugh to have achieved the feat at the time. In the 1999 World Cup, Moody hit what was then the fastest half-century in World Cup cricket, off 28 balls against Bangladesh. Another record he held, which wasn’t quite recognised worldwide, was to have thrown a haggis a distance of 230 metres.

A back injury forced Moody into retirement from all forms of cricket in 2000-01, after which he became the president of the Australian Cricketers’ Association and coach, followed by being appointed as the director of cricket at Worcestershire. He also dabbled in commentary and punditry on television during this time. In 2005, he was linked with the high-profile job of being the coach of India, but eventually ended up becoming the head coach of the Sri Lankan team. Under his guidance, Sri Lanka reached the final of the 2007 ICC World Cup, where they lost to Australia. The match would be Moody’s last as Sri Lanka coach, as he resigned a month after the tournament and went back to Western Australia to coach and manage his state team. In his very first season, the Western Warriors won the Pura Cup. However, the rest of his 3-year stint was not as successful; in 2010, Moody quit the job and went back to commentary.

Finally, in December 2012, it was announced that Moody was appointed coach of the new Indian Premier League (IPL) franchise Sunrisers Hyderabad. In his first season, Moody took the Sunrisers to a fourth-place finish in the tournament, which gained them qualification to the Champions League Twenty20 (CLT20) 2013 qualifiers. The Sunrisers made it to the main event after sailing through the qualifiers, but could not make the cut to the semi-finals. Tom Moody coached the Sri Lankan cricket team for a brief period and under his guidance they reached the 2007 ICC World Cup final, where they lost to Australia © Getty Images

Even though Moody did not hold a prolific international record as a player, his First-Class record is quite impressive. Moody scored over 21,000 First-Class runs and took 361 wickets in 300 matches. This includes as many as 64 centuries and 94 half-centuries. His List A career involves 366 games in which he scored over 11,000 runs, including 18 hundreds and 77 half-centuries, along with taking 257 wickets.

Here are his career statistics: