Tony Greig was one of the most under-rated all-rounders in the history of the game and a hugely influential figure who shaped cricket’s destiny. 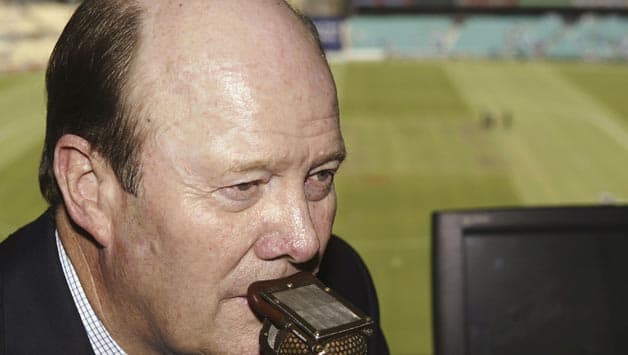 Tony Greig was an important voice in cricket. His many controversial moves, on and off the field, still could not keep him away from getting an invite for the MCC Spirit of Cowdrey lecture earlier this year © Getty Images

Tony Greig, who passed away on December 29, 2012, was one of the most under-rated all-rounders in the history of the game and a hugely influential figure who shaped cricket’s destiny. Arunabha Sengupta remembers the cricketer, conspirator and commentator who for ever lived larger than life.

He stood at six feet six inches, towering over his fellow men on the cricket field. Most of his exploits were larger than life, in keeping with his frame.

Tony Greig chose cricket as the vehicle to propel him to a life worth living from the austere days shared with his harsh and demanding Scottish father in Queenstown, South Africa. Cricket took him on a joyride, traversing the heights of stardom, success, fame while lowering him into the depths of notoriety as well. Summing up the pros and cons, cricket made his life well worth living, with a joie de vivre seldom witnessed in the modern day.

And in return, cricket in its modern manifestation owes immensely to the darker days of Tony Greig. Without the couple of dubious turns that Greig took in his colourful life, the game might have been stuck on the narrow straight road with a looming dead end.

He stood tall on and off the field — in height as well as his deeds with the bat, ball and charm. He was not the best batsman of the era, but made up for technical limitations with a personality that knew scant limits. He lacked pace with the ball, but compensated it with his penchant for contests. He loved to fight and win, the very way he established himself in the English team with fifties in each innings to go with five wickets in his Test debut.

His reputation as an all-rounder of rare calibre might have been wrongly disputed in some quarters, but his elevation to captaincy seemed to come as a natural course of his career. He grew into one of the most canny, if controversial, captains of England, forging his unit into a professional band of fighters.

He had fierce run ins with Ian Chappell and the Australians, but did not flinch while making 446 runs against Dennis Lillee and Jeff Thomson in their backyard, including a century in Brisbane.

He was the most unpopular man in the Caribbean after uttering that dreaded word ‘grovel’ and was forced to make peace by walking on his knees. Yet he did score three hundreds of quality and aggression against the raw pace of Michael Holding and Andy Roberts, two of them in the in hospitable away wickets of Bridgetown and Georgetown.

In India he planted his long legs down the wicket and neutralised the spin of Bishan Bedi and Bhagwat Chandrasekhar. He battled the turning ball, dusty wicket and high fever to score an imperious hundred in Kolkata. He asked Derek Randall to turn cartwheels to entertain the crowd. He used his blond locks and charisma to win over the masses. He blew kisses to the ladies in the ground, famously rode on the back of a scooter, befriended the press with a heady mix of charm and flattery. It was his magical tour in 1976-77, when he was idolised by millions, and Indian numerous children born during the days of Test matches were named Tony. In Robin Marlar’s memorable phrase, he became the ‘Clive of Cricket’, and the normally partisan fans did not really mind when England took the series 3-1.

It was in the aftermath of the Centenary Test that Greig wholeheartedly embraced controversy and was instrumental in clinching a victory for cricket and cricketers. He teamed up with Kerry Packer, another son of a harsh and demanding father. By that time, Greig was past his peak, according to some, plummeting downhill. And he took up perhaps the most important cricketing role of modern times by becoming Packer’s trusted general, recruiting officer and close confidante.

The World Series Cricket (WSC) that followed paved the way for the financial success and fan following that cricketers enjoy today. In the two years that violently shook the cricketing world and created a fissure between the establishment and the parallel cricketing ‘circus’, rulebooks were rewritten, lines were redrawn; the clash and furore jolted the slumbering cricketing authorities into realising that the times had changed and the game had to be reinvented to survive in a new world. 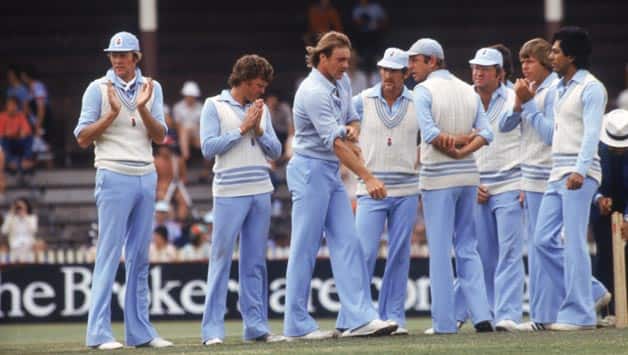 Captain Tony Greig (left) representing the World in the grand final of the World Series Cricket Supertest against Australia in Sydney, On February 4 1979 © Getty Images

Greig never played Test cricket after WSC. However, with 3599 runs at 40.43 and 141 wickets at 32.20 in 58 Tests, he left his mark on the game as one of the most under-rated all-rounders in the history of the game. Yet, his significance in the annals of cricket perhaps remains more in terms of the leading role he played to dent the arrogance of the cricket administrators and make cricket a feasible way of earning a livelihood.

Greig’s dalliance with Packer and his television industry did give him a new lease of life. His infectious excitement that was so audible over the microphone that down the years it touched the heart of all the devotees of the game.

One remembers the Desert Storm in Sharjah when Sachin Tendulkar, having guided India to qualify for the final by getting the required runs, launched a stupendous attack on the Australians in a near impossible bid to win the game. Tony Greig, delirious over his microphone, went: “Sachin Tendulkar wants to win the game.” He was not just airing his impassive views; he was splashing along, wading in the heady cocktail of action, his heart in throes of intoxicated delight.

And when Glenn McGrath walked out to bat with only one wicket separating India from an incredible win at the Eden Gardens in 2001, Greig’s voice rang out, “Tens of thousands of Bengalis watching you as you walk in, waiting for your head to be chopped off.” He had been there, done it. And he could feel the very pulse that throbbed in the veins of the current day players.

Yes, he loved every minute that he was associated with the game — in clouds and in sunshine, as player, conspirator, rebel, captain, commentator. He lived life to the fullest as long as there was cricket in the air.

The spirit of Greig

He was a rather controversial choice for the MCC Spirit of Cowdrey lecture earlier this year, and not everyone was quite convinced that given his mercenary past, he was the right choice to deliver the address. And some of his arguments about the money making tendencies of the modern cricketing administrators did indeed ring a little thin given the Packer circus he had championed.

Yes, he did have a lot to share about adequate focus on Test cricket. The dangers of current day calendars straining with the burden of innumerable Twenty 20 leagues are out in the open for all to see. Yet, when his address appealed, “The spirit of cricket is … more important than turning out multi-millionaire players,” coming from the six foot six inch frame of Tony Greig, commander-in-chief of Packer, it seemed to sound somewhat hollow.

He also talked about his regrets. He never patched up with EW Swanton, the commentating puritan who branded Packer ‘Anti-Christ’. He also spoke about his sorrow at not being open to Alec Bedser.

In retrospect, a look at the early part of Greig’s speech will tell us a lot about how time and fate conspire in our lives. “My meeting with Kerry Packer, five days after the Centenary Test on March 22, 1977, gives the best insight into how I felt at the time: ‘Kerry, money is not my major concern. I’m nearly 31-years-old. I’m probably two or three Test failures from being dropped from the England team. Ian Botham is going to be a great player and there won’t be room in the England Test side for both of us. England captains such as Tony Lewis, Brian Close, Colin Cowdrey, Ray Illingworth and Mike Denness all lost the captaincy long before they expected. I won’t be any different. I don’t want to finish up in a mundane job when they drop me. I’m not trained to do anything. I went straight from school to playing for Sussex. I am at the stage in my life where my family’s future is more important than anything else. If you guarantee me a job for life working for your organisation I will sign.’ ”

Tony Greig was looking for a lease of life and he signed. He managed to find second wind after his playing days. Till his death on December 29, 2012, he managed to live a life touched by the sublime delights of cricket. And the game was the winner for it.