Shahid Afridi pulled off one of the greatest ODI performances on July14,2013. Abhishek Mukherjee checks the cricketers who have had the highest single impacts in particular ODIs. 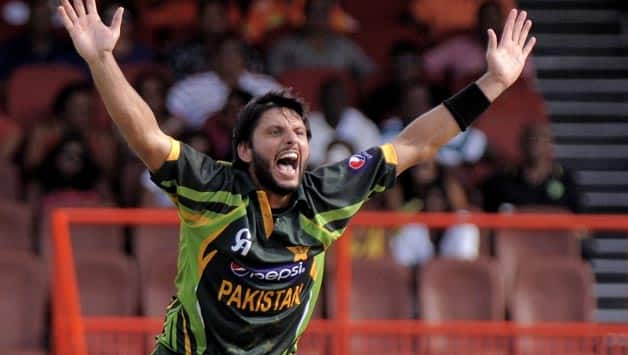 Shahid Afridi pulled off one of the greatest ODI performances on July 14, 2013. Abhishek Mukherjee checks the cricketers who have had the highest single impacts in particular ODIs.

Thanks to its intensity and quality of cricket, the Ashes Test at Trent Bridge managed to take the attention of the Pakistan-West Indies ODI series, which meant that Shahid Afridi’s amazing comeback to international cricket got more or less overlooked by the cricket fraternity.

Later in the match, Afridi picked up 7 for 12 in 9 overs. These are the second-best figures in the history of ODIs after Chaminda Vaas’s 8 for 17. Afridi dominated the match to such an extent West Indies scored only 22 more than Afridi and took only 2 wickets more than him. In the process he also became the first cricketer ever to achieve the 7,000 run-350 wicket double in ODIs.

This made me think: How do we measure the contributions of all-rounders in particular matches? These are not absolute performances (like the 100 run-five wicket doubles by Viv Richards and Paul Collingwood) but the entire impact on the match. The criterion I decided to consider were:

Of course, one could not consider all performances. For example, if a batsman scored 120 out of 200 in the match and bowled a spell of 1-0-2-1 he will get an unfair advantage; the same will happen to a bowler who has taken a five-for and has scored, say, a 10-ball 17.

To put a criterion I put two restrictions. A player had to satisfy at least one to qualify for the analysis:

Of course, Richards and Collingwood had qualified for both. But there are actually 24 others whose performances need to be judged against them. Gary Gilmour’s performance in the 1975 World Cup semi-final or misses out (and so does Murali Kartik’s against Australia at Mumbai in 2007-08) — but we need to draw a line somewhere. Let us have a look at the entire list first:

Table 1: Players satisfying at least one of the two conditions mentioned above, in chronological order.

Now, how to combine them? Let us check out what the match aggregates were like and do some calculations. Ideally we should have put everything in the same table but it would go awry on most browsers. Hence the next best way:

Now we have enough data to combine the two tables and use the parameters mentioned above to rate the performances. Ideally we should combine the four performances as well.

Let us try to multiply them and obtain a combined value. I had thought of multiplying the four. The numbers may not look comparable: the proportion of runs and wickets will always have a value less than one; on the other hand there is a significant probability that the batting strike rate and bowling economy rate ratios compared to the match can be greater than one.

However, if we look at it closely we will find out:

– We have been using the proportion of runs scored and proportion of wickets taken as the main parameters
– We are simply multiplying the parameters by batting strike rate and bowling economy rate to assign them better values
– We are then combining the two proportions by a simple multiplication.

Most of us have missed out on Afridi’s performance at Providence — which was the greatest all-round performance in an ODI by a substantial distance; or even if we had we did not realise its significance. I guess the intensity of the Ashes was too much in comparison.

(Abhishek Mukherjee is a cricket historian and Senior Cricket Writer at CricketCountry. He generally looks upon life as a journey involving two components – cricket and literature – though not as disjoint elements. A passionate follower of the history of the sport with an insatiable appetite for trivia and anecdotes, he has also a steady love affair with the incredible assortment of numbers that cricket has to offer. He also thinks he can bowl decent leg-breaks in street cricket, and blogs at http://ovshake.blogspot.in. He can be followed on Twitter at http://www.twitter.com/ovshake42