Trivia on runners, an extinct species of cricket

Trivia on runners, an extinct species of cricket

There have three instances in Test cricket history where the middle has been populated by four men in batting gear.

The simple act of the batsmen crossing over for a run is not always as simple as it sounds, even when there are only two men involved in the process. Trevor Bailey, the England and Essex all-rounder, through a long cricket career, was well aware of this, particularly when the man at the other end was Denis Compton. “A call from Compton was merely the basis of a negotiation,” was Bailey’s considered opinion, and he was never sure about how the negotiation would pan out. It was also said that Compton was the only man in the world who would call his partner out for a run and then wish him all the best as they crossed over. If there could be so much of uncertainty with only two men out in the middle, it is easy to imagine what mayhem could arise from three or even four men out there together. READ: When Virender Sehwag came as a runner for MS Dhoni

There have three instances in Test cricket history where the middle has been populated by four men in batting gear, as follows:

India vs West Indies, Brabourne Stadium, Bombay, 1958-59: In the West Indies 2nd innings of 323 for 4 declared, there was a situation on Day Three of the match when Garry Sobers (142 not out) had Rohan Kanhai running for him and the other man Basil Butcher (64 not out) had Conrad Hunte doing the leg-work. The unfinished 5th-wicket partnership realised 134 while four bats and four pairs of batting pads were being brandished about. Umpires Jamshed Patel and MG Vijaysarathi, must have heaved a sigh of relief when the West Indies skipper Gerry Alexander declared the innings closed.

West Indies vs Australia, Bourda, Georgetown, 2003-04: The drama began to unfold on the first day when West Indies wicketkeeper Ridley Jacobs pulled a groin muscle during his innings of 54 not out in the team’s 1st innings, and was rendered hors de combat a result. In the West Indies 2nd innings of 398, Shivnarine Chanderpaul (31), who had sustained an injury during his 1st-innings score of 100, had Marlon Samuels running for him. The other man on strike, the injured Jacobs (11), had Wavell Hinds (who had also kept wickets in both of the Australian innings) running for him. It was a relief for Asoka de Siva and Rudi Koertzen, for this unnerving situation lasted for only 7 runs, and ended when Chanderpaul was dismissed.

Sri Lanka vs India, P Sara Stadium, Colombo, 2008: Fortunately, the awkward situation lasted for only 1 over on Day 4, the last over of the Indian 2nd innings of 268. VVS Laxman (61 not out), had Gautam Gambhir running for him whilst Ishant Sharma (0) was being assisted by wicketkeeper Parthiv Patel. The umpires for the match were Mark Benson and Koertzen (for whom this was the second experience of having 4 men out in the middle).

Kent vs Middlesex, Dartford, 1983: Bob Woolmer of Kent, opening the innings, had broken a toe during his 1st-innings knock of 118. In the Kent 2nd innings, he batted at No. 11 with a runner, and remained not out without opening his account. In the same innings of 87, Woolmer joined Chris Cowdrey, who was himself batting with a runner at No. 10 because of an injury. Mercifully, this confusing alliance lasted for only 2 runs, much to the relief of umpires Donald Oslear and Ken Palmer.

Northern Districts vs Canterbury, Gisborne, 2001-02: The match in question came with an unusual twist, in the sense that both openers came out to bat with runners, a unique event in First-Class history. It was a drawn game, and Northern Districts, following on, scored 257 for 4 in their 2nd innings. The openers, James Marshall (38) and Matthew Hart (31), both came out with runners, Graeme Aldridge for Marshall, and Daryl Tuffey for Hart, and the confusion only eased off when the 1st wicket fell at the total of 50 when Hart was dismissed and two men left the field.

Plight of Pairaudeau: Bruce Pairaudeau had a rather strange and very tiring experience in the 1st Test against England at Edgbaston in 1957. Replying to England’s disappointing total of 186, opener Pairaudeau was yorked in Fred Trueman’s 2nd over. The other opener and wicketkeeper Kanhai (42 not out) and Clyde Walcott (40 not out) took the team to 83 for 1 at stumps on Day 1. Brian Statham then removed Kanhai with the first ball of Day 2. Shortly after that, Walcott, trying to steal a single, pulled a leg muscle so severely that he collapsed and fainted on the field. Soon, he was compelled to have Pairaudeau as a runner and later in the innings, Pairaudeau also acted as runner for Worrell.

Collie Smith defied the English attack for almost 7 hours for his 161. When England batted in their 2nd innings, Walcott and Worrell were substituted by Wes Hall and Nyron Asgarali. After the breakdown of fast bowler Roy Gilchrist, Gerry Alexander substituted for him.

This was the famous Test in which captain Peter May (285 not out) and Colin Cowdrey (154, his highest Test score and his first Test century in England) had the celebrated 4th-wicket partnership of 411, and in which Sonny Ramadhin bowled 774 deliveries, the most by anyone in a single Test.

Hundreds with runners: The ACS archive lists 36 instances till date of a player scoring a First-Class century with the help of a runner. Of these, 12 instances are of batsmen using runners for the entirety of the century innings.

The first recorded instance was that of Alfred Mynn (who had suffered a serious leg injury during pre-match practice), scoring 125 in the 2nd innings of the South against the North at Leicester in 1836.

The highest individual score for a batsman hitting a century with the help of a runner is 246 by Prof. DB Deodhar for Maharashtra in a Ranji Trophy match against Bombay at Poona in 1940-41.

Two batsmen have been known to score centuries on 2 different occasions in First-Class cricket while using runners.

Buckingham’s place: Danny Buckingham scored 150 in the Tasmania 2nd innings total of 357 against Western Australia at Perth 1986-87, batting at No. 3 and using a runner for the entire innings. Unfortunately, the identity of the runner could not be ascertained even after repeated correspondence with Cricket Tasmania staff at the Blundstone Arena, Hobart (erstwhile Bellerive Oval), followed by a personal visit and extensive discussion with knowledgeable statisticians and historians.

Buckingham’s second effort was 112 in the Tasmania 2nd-innings total of 295 against New South Wales at Devonport in 1987-88. This time he had the assistance of Jamie Cox for the entirety of his century.

Fantastic Mr Fox: The feat of Graeme Fowler was even more remarkable: he scored a century in each innings of a First-Class match using runners both times the only man to do so in the history of First-Class cricket.

It was a County Championship game between Lancashire and Warwickshire at Southport in 1982. Warwickshire, under Dennis Amiss, took first strike, amassing 523 for 4, with a brace of double centuries, Alvin Kallicharran (230 not out) and wicketkeeper Geoff Humpage (254).

Even with this large total, Lancashire found themselves on 40 for 1 at stumps on Day 1, with Graeme Fowler on 26 and wicketkeeper Chris Scott on 0. Fowler did not use a runner on Day 1, but was dismissed for 126 the next morning, having added exactly 100 runs to his tally before lunch, and with David ‘Bumble’ Lloyd, who had been dismissed on the previous day, running for him.

Lancashire put up a healthy 414 for 6 in their 1st innings. Warwickshire made a shambles of their 2nd innings, scoring only 111 (Nelson how many times has this number been the harbinger of bad tidings in cricket?). Leslie McFarlane, with 6 for 59, was the main wicket-taker.

Lancashire won the match by 10 wickets, racing to 226 in 60 overs. Lloyd remained not out on 88, and Fowler scored his second century of the match (128 not out). This time, however, he had compatriot Ian Folley, who had not been required to bat in either innings, running for him. It is said that when Fowler had raised his bat to acknowledge the cheers from the crowd after reaching his century, Folley had raised his bat as well and had been equally enthusiastically cheered for his efforts by the discerning spectators.

Runners have been an integral and often delightful feature of cricket for many, many years, and have frequently added flavour and body to the rich history and folklore of the game. Alas, ICC, during their June 2011 meeting, decreed that the use of runners would no longer be permitted in any International cricket match, the amendment to the existing Law coming into effect from October 1, 2011. Though an extinct species in the present context, runners leave behind some wonderful cricket stories. 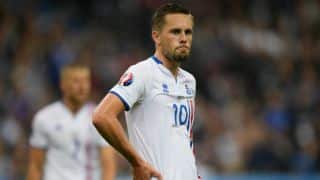