The armchair critics are the biggest sports marketer 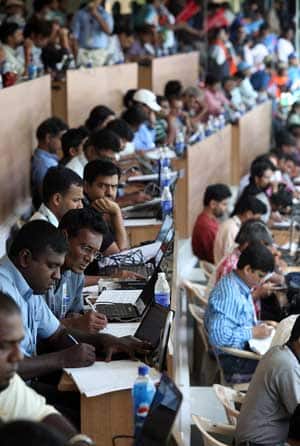 The cricket columnist of various newspapers and websites and commentators on the television are our lifeline. They provide the much-needed content to build our own theories and strategies game plans that we hold quite dear to our heart © Getty Images

The selection of Abhimanyu Mithun over Irfan Pathan as a replacement for Praveen Kumar for the tour to Australia has once again divided opinions among the cricket fans in India. It has brought to the forefront the eternal quest to pass our two penny of opinion for every cricketing decision and give this meaningless indulgence the shape of a meaningful act. The hypothesis that our views are paramount for the game to run in India is what makes this whole process of reaching judgements and deriving conclusions intriguing.

In all practicability, without the opinionated public, cricket will continue to function. But come to think of it, without the armchair critic’s review on team selection, match performances, shuffling of batting order, bowling changes and field placements the biggest of stars would have faded into oblivion by now and cricket would have become a bland dish without the adequate amount of salt and pepper in it.

Today it is Mithun and Pathan, yesterday it was about Sachin Tendulkar’s 100th century, few months back it was about the debacle of English summer; history was about being bad travellers. In the future there will be about something else, but the point is that this love for holding on to our ideas about the game of cricket is continuous. It makes the armchair critic indispensable to the game. By eccentrically striking dinner table conversations, initiating virtual chat with our online friends, trying to convince anyone and everyone of our accurate analysis and by keeping the memories of the nostalgic past alive without charging a fee, we boost cricket’s marketability in India and make the Board of Control for Cricket in India (BCCI) the richest cricket board of the world.

The internet addicted audience among us dedicate their lives in collecting anecdotes and figures of the star cricketers and team India. We also archive every bit of their on and off field moves with all sincerity. These data and patterns are carefully stored in the memory box and unleashed as weapons to obtain favourable comparison against opponent teams and not so preferred players. The self comforting statistics become the oxygen to defend our stance. So today if there is a virtual debate between Mithun and Pathan, we know who the real protagonists are.

The luxuries of dancing to the nuances of cricket from the periphery in comparison to taking guard at the centre is not lost upon us, yet we are prompt enough to point fingers at the first sight of a dip in the team’s or player’s performance graph. The unconditional nature of the relationship works as long as the runs are flowing and wickets are tumbling. Generosity takes new shapes as admiration and adulation is showered on the cricketers like a millionaire. Victories are celebrated more expansively than the players themselves. But the moment the sea gets a tint rough the world turns upside down and the overnight heroes become instant villains. No stone is then left unturned to rip the reputation of the ‘Gods’ apart. Because we believe that it is our birthright to only witness and experience the best of talents and performances from the team we support.

The cricket columnist of various newspapers and websites and commentators on the television are our lifeline because the views of the experts liberate us and lay the foundation for our existence. It provides us the much-needed content to build our own theories and strategise game plans that we hold quite dear to our heart. If the team management does not believe in our strategy and then no criticism is spared and if it leads to a failure then conveniently without any logical root we voice our displeasure and demand for the culprit’s head. And if our strategy is what the captain believes in then success is considered as a coincidence. It is in these small moments of ecstasy and agony that the true connection between the fans and our fantasy world of sport is reflected. Pathan and Mithun are just tools that supplement this bond.

It is a lifetime journey with more downs and less ups, and vice versa in rare cases. Yet there will never be an issue of attrition because with every passing year of our life this association becomes the biggest source of involvement.

We the armchair critics are the biggest sports marketer and it is our largest singular contribution to the game of cricket in India. In fact the basis of this relationship can be extended to any sport across the world. The addictive nature of this relationship is what needs to be preserved for sports to retain its eternal beauty.

(Sidhanta Patnaik is a sports marketing professional, public speaker and a part time writer. His twitter id is @sidhpat)

Playing two series in subcontinent has made me mentally tougher: Bravo