Umar Gul: Pakistan's most consistent pacer since the Wasim-Waqar era

Umar Gul: Pakistan's most consistent pacer since the Wasim-Waqar era

Born on April 14, 1984, Umar Gul has been the face of Pakistan's pace bowling in recent times.

Born on April 14, 1984, Umar Gul has been the face of Pakistan’s pace bowling in recent times. If fast bowling had been all about aggression, Gul could have thought of becoming a typical subcontinent spinner. But pacers like Gul often remind that it’s about the skills than other factors which make for a successful player. Abhijit Banare looks at the career of Pakistan’s most consistent bowler across formats since the Wasim Akram-Waqar Younis era.

The end of every great career makes the beginning of a hope for the successor to fill the shoes. In Pakistan, you shake a tree and countless pacers fall from it. Such is the potential of fast bowling in Pakistan that it’s always a competition between the better to be the best. As the dreaded pace trio of Wasim Akram, Waqar Younis and an inconsistent Shoaib Akhtar had descended, many new hopes rose through the ranks. And among them lay the name of an inexperienced 19-year old Umar Gul.

Talent and the Under-19 success

Over the years, Pakistan setup has seen number of talented pace bowlers rising through the Under-19 levels. Gul was one of the bright spots from the 2002 Under-19 World Cup. He played alongside Salman Butt in the team which also saw many future Indian stars like Parthiv Patel, Irfan Pathan, (add Stuart Binny now).

However, things have not been all easy for the pacer. Almost a decade after the experience, Gul admitted that he had thought of quitting as he couldn’t find his way in to the academies. Hailing from the Peshawar in the Kyber Pakhtunkhwa region, Gul credited the Under-19 experience for his growth as a cricketer.

“I was on the verge of walking away from cricket after a poor 2000-2001 domestic Under-19 tournament following which I was not selected in the Pakistan Academies team. But then I gave myself a last chance, worked hard by attending the Academy side`s training sessions as a net bowler until I was picked in the fast bowlers` camp that was supervised by Daryl Foster. Lady Luck finally smiled on me when I was selected in the Pakistan squad for the ICC Under-19 World Cup 2003 and though the event turned out to be a poor one for the side, personally I benefitted as I regained my form, picked up some key wickets and when changes were made in the Pakistan side following a disastrous ICC World Cup 2003, I was able to find my way in the side,” Gul was quoted in an interview by the Press Trust of India.

“I owe it big time to the ICC Under-19 World Cup 2003. If that opportunity had not been provided to me at that time, I would have left cricket and reverted my attention and focus to academics,” adds Gul.

Gul made his debut for the Pakistan senior team in One-Day Internationals (ODIs), in April 2003 against Zimbabwe in the Cherry Blossom Sharjah cup. It was a decent outing for Gul with two wickets for 25 runs in his seven overs. The Test debut came against Bangladesh later in the 2003. This series was the launchpad for Gul as he ended with an impressive 15 wickets (third highest) and topped the charts in  the ODIs with 11 wickets.  The maiden appearance in the shortest format was against Kenya at Nairobi in September 2007. Until his ODI debut, Gul had played only nine First-Class matches but had shown enough promise and potential to be drafted at the highest level.

There have been many legends in fast bowling, who threaten the batsman with pace, maintain an intimidating physique or have an action which can scare the batsman — Gul has none. His behaviour on the field is as unassuming as his rhythmic action. He is one of the few bowlers who make for a delightful watch. Gul’s run-up, jump, rotation of arms, wrist position, release are all something your coach would approve of at the basic level. It’s all about the basics which make for a solid career.

The reason Gul is mentioned as the best from the better is due to his natural abilities to make the ball move. Gul’s biggest weapon is the reverse swing – an art many Pakistan legends managed amidst controversies. But Gul was something special: he could reverse it even with the new ball. In an era where two new balls are used in limited overs cricket and the shortest format lasts hardly for the duration to offer reverse swing, Gul manages to do in both. The art of reverse swing has been a hidden story amongst the Pakistan pacers perhaps passed from the senior pros to the younger ones and so on. Gul’s neat action which includes flexible wrist position and holding of seam adds to his advantage. Throughout the innings he won’t make any change in action and yet move the ball both ways at high speed. It is due to this gifted ability that the Kiwis got a bit suspicious during the ICC World T20 2009. With the mystery of reverse, there followed ball tampering allegations, but this time around Gul was cleared of any wrongdoing.

a) Removing the Big Four of India

With less than a year of Test match experience, Gul made a lasting impression in a high profile series. And any good performance against India will be remembered by the selectors and fans for a long time. Trailing 0-1 coming in to Lahore after the Multan bashing from Virender Sehwag, Pakistan were under pressure to come back in the three-match Tests series. Gul had replaced the unjured Shabbir Ahmed. At Lahore, Gul stunned everyone by dismissing the mighty Sehwag, Sachin Tendulkar, VVS Laxman and Rahul Dravid. Having great match figures against India is one thing but having these names in your wicket least is an unforgettable moment. Gul ended the innings with five for 31. Pakistan went on to win by nine wickets.

Gul had turned in to a skilled bowler adept at performing across formats. It was only his second T20 when he started off the 2007 World T20. He turned out to be the strike bowler ending up with 13 wickets in the tournament which they lost to arch-rivals India in a dramatic finish. But that marked his dominance in the shortest format and has been the key in Pakistan’s T20 World Cup campaigns that followed including the one which they won in 2009.

In March 2013, (an year when Pakistan found themselves playing against Pakistan too often) Gul produced a sensational bowling performance picking five wickets for six runs as South Africa crashed to their lowest ever T20I score. From 50 for one, the Proteas found themselves at 53 for six. Faf du Plessis, Chris Morris, Justin Ontong and Farhaan Behradien all gone in a span of six deliveries. AB de Villiers managed to give some joy to Mohammad Irfan by getting out between the two Umar Gul overs which changed the match. Gul came back and dismissed Kyle Abbott.

The 2012 performance against the Proteas earned him the ICC T20I performance of the year award. But that was the second instance of Gul’s heroics. He had achieved a similar feat against New Zealand in the ICC World T20 2009 in England. Against New Zealand, Gul dismissed Scott Styris, Peter McGlashan, Nathan McCullum, James Franklin and Kyle Mills. It was the first time a bowler had picked a five-for in T20s which meant it was the best bowling performance in a T20I.

If the injuries to Pakistan players where archived, the physio would have had to read a long history of Gul’s bowling which would have occupied more files than others. But to his credit, Gul has often made solid comebacks from injuries and from poor form. But what haunts Pakistan more is his performance in big games. The classic example to remember is the ICC World Cup 2011. Gul was the most destructive bowler and was a vital cog for Pakistan, yet in the high voltage semi-final clash against India, Gul floundered. All credit to the explosive Virender Sehwag in dismantling but Gul just couldn’t get his act together. It was just one of the many examples of Gul’s performances in big matches. Still nothing discourages the Pakistan skipper from using him after all he has been the strike bowler early on.

After a settled international career, Gul got married in October 2010 and has a daughter named Meeraj. 12 years in to competitive cricket, Gul is one of the consistent bowlers Pakistan is blessed to have. There have been many promising careers that have begun in front of his eyes and ended in a sad way with the most painful being a supremely talented Mohammad Aamer. At 29, Gul may still have at least five more years ahead of him provided he maintains his fitness. Fighting injuries, controversies around the team and personal battles, Gul is symbol of what is good with Pakistan cricket.

IPL 2014: Parsimonious bowlers who can make their mark in the tournament 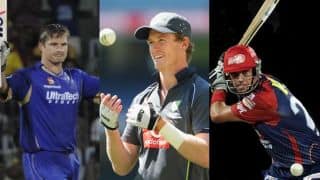 IPL 2014: Foreigners as captains not unwise