The run-up is measured (read purposeful). Looking at him, it feels he might give Usain Bolt a tough competition in the 100 metre race. The run-up is akin to poetry in motion with the sole intention to beat the batsman. Outwit him by pace and then the movement. 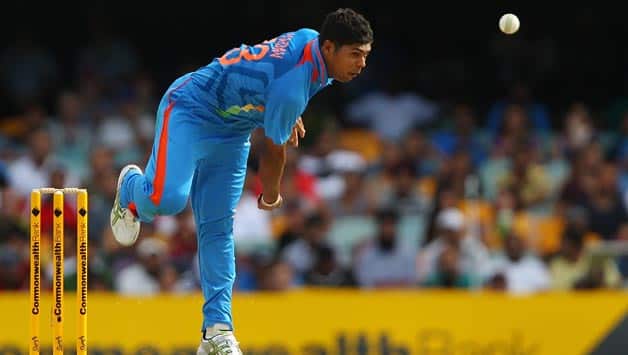 Umesh Yadav, if fit, will be torch-bearer of India bowling for years to come © Getty Images

The run-up is measured (read purposeful). Looking at him, it feels he might give Usain Bolt a tough competition in the 100 metre race. The run-up is akin to poetry in motion with the sole intention to beat the batsman. Outwit him by pace and then the movement. There is a lot of resolve to keep coming at the batsman. In the land where a fast bowler is reduced to a line-and-length bowler at the drop of hat, Umesh Yadav is a refreshing change to this existing (read frustrating) pattern.  He has a side-on action which is smooth and the wrist position at the point of release is just perfect. The follow through is proper. The propensity to move the ball both ways with his fiery pace makes him a difficult proposition to face.

Looking at Yadav’s bowling stride you can never tell what the match situation is. He never lets that affect him; he is oblivious to that. He is one of those rare breeds of bowlers who run in hard every single time. Even if the batsmen are going hard at him (which has happened quite a few times in the IPL 2013 and also in his international career); Yadav doesn’t drop his intensity at all. He doesn’t hurl abuses at the batsmen anytime. His sole aim is to hit the right areas.

He has no commotion for theatrics. If he gets a wicket there is just a small celebration. No over-the-top stuff, no effort to let the batsman know where he needs to go after dismissal, no words to let the opposition know who the boss is. He gives a little smile which shows his feeling of contentment. He is level-headed that’s what is a striking feature about Yadav.

Clocking in excess of 140 kmph consistently for three seasons for India must be some sort of record. He started out as an out-and-out fast bowler. In less than two seasons he was bowling to Indian greats like Rahul Dravid and VVS Laxman in a Duleep trophy game. He was just an unheralded prospect who represented unglamorous Vidarbha. But the moment he got the Dravid and Laxman he was no longer an unknown name.

Kapil Dev was a master of swing whose graceful run-up and athleticism were his biggest assets. Javagal Srinath was injury-prone yet his action was smooth. He confounded the batsmen with his action, as it was not discernable which way he would move the ball. Zaheer Khan’s biggest positive is his ability to make the ball move whichever way he wants to. He is a master with the old ball and it is a delinquency to relax against him.

At the moment, Yadav’s USP is his raw pace. His biggest pet-peeve has been injuries. They have hit him at the wrong time. After impressive display of bowling against England in 2012 in the first Test at Ahmedabad he injured his lower back and missed a lot of cricket. He went to a rehabilitation programme at the National Cricket Academy and now looks as fresh as daisy. He has not lost his hunger, pace and intensity. The basic tenets of his bowling are still on view.

In the warm-up tie against Australia, Yadav showed his class by removing the top five in his first spell. The exhilarating aspect about that performance was the control which he had with the new ball. India can win most of the games by their bowling if Yadav regularly gets wickets in his first spell. And that will be the case every single time he bowls for India. He is the strike bowler whose spell will be so very important. At times he will go for runs like how Shoaib Akhtar or Brett Lee experienced. But whenever both these guys got wickets, their respective sides won on many occasions.

Yadav, if he is fit, will be torch-bearer of India bowling for years to come. A lot is expected from him. Hopefully for India, he won’t get lost in the wilderness like most of the other promising bowlers. His future sure does look bright.