Umpiring Conundrums in cricket 5: Half caught half runs

Umpiring Conundrums in cricket 5: Half caught half runs

In this particular episode of Umpiring Conundrums Arunabha Sengupta narrates a curious incident which once supposedly took place in a match in New Zealand.

There can be some situations in cricket, very legitimate ones, that might confuse the most diligent followers of the game. In this series we look at several such scenarios. In this particular episode Arunabha Sengupta narrates a curious incident which once supposedly took place in a match in New Zealand.

In the Wisden Almanac of 1939, Arthur Gilligan posed several complicated questions for the cricket follower. All of them dealt with the interpretation of the laws of cricket. And most of them were designed to perplex even the greatest connoisseurs of the game.

When he described the conundrum dealt with in this particular episode, Gilligan did not quite specify which match he was talking about. But he did mention that it was played in New Zealand. He also mentioned that the case was later sent to the MCC Committee for a ruling.

The last two batsmen were in at the wicket, and the last ball of the game was about to be delivered. There were two runs required for victory.

The bowler, Jones, sent down a good length ball to the batsman Smith. The latter took a mighty swipe at it. The ball went up miles, gaining height rather than distance. The mid-on, Jackson, got under it, crying Mine! And at the apex of its near vertical rise through the air, the ball split into two.

The batsmen had enough time to run two as one half of the ball descended into the hands of Jackson. But even as the fielders celebrated, non-striker Robinson, pointed at the other half of the ball lying on the ground, claiming that the runs should be counted.

So, according to one point of view, the fielding side had won the match by a run. According to the second, the batting side had been victorious by a wicket.

A mathematical wag suggested that the match ended in a draw with the scores level. It was not a tie because in 1939 limited-overs cricket had not kicked off yet, and the batting side had half a wicket standing. You see, since only half a ball was on the ground, so half of the two runs had to be counted. And there was half a dismissal.

A confession when I say a mathematical wag, I mean yours truly. But I am sure more souls with a similar bent of mind have thought of the same.

The umpire in this case was a sensible one. He just declared that the ball would have to be re-bowled, after replacing the broken one with one that was whole, and the previous delivery would be deemed a dead ball. Well, split in two, a ball would be quite dead.

According to Gilligan, the ball was replaced, and the bowler, by now too excited to control his length and line, sent down a full-toss down the leg side which was gleefully dispatched to the square leg fence.

The losing side set the case to the MCC Committee for a ruling. In the stuffy headquarters of Lord s, there was unanimous agreement with the umpire s verdict. 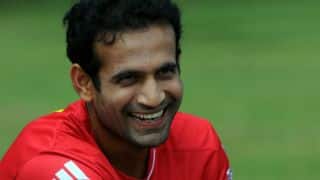 Irfan Pathan is now the subject of a PhD! India Women to be felicitated by MCA