Ross Taylor is back at his best to reclaim his stake as New Zealand s batting lynchpin.

The target read 336. New Zealand were 13 for 2 in the fifth over. Chris Woakes bowled a bit too full. Ross Taylor took a little lunge forward and timed it past cover. The four was the first of several ingenious strokes to come.

There were the textbook cuts, the drag-flicks, the trademark Taylor-made mid-wicket hoists, the tongue-out celebration and then going berserk.

Taylor was limping for a major part of his innings. The physiotherapist asked him to retire hurt. The New Zealand camp hoped he would just add a few more to his tally and let the lower middle order take over. Taylor had other plans.

Kane Williamson had almost taken them to a 2-1 lead at Wellington. Well, almost. This was the must-win.

The recurring injury that made Taylor miss the third ODI prevented him from running twos. Instead, he adopted to boundary-hitting in all, 17 fours and 6 sixes.

The series was levelled 2-2 in the end. Taylor had arguably played the finest ODI innings by a New Zealander. Hours later, he turned 34. He decided to keep the wine bottle packed and get ready for the finale. It didn t matter if the birthday had to be celebrated at the physiotherapist s table. His favourite fried chicken and wine can wait for the time being.

Taylor is back at his best to reclaim his stake as New Zealand s batting lynchpin.

It s nice to see the ball swing and during day-night games, not to fear it. A lot of times in day-night games you didn t want to the ball to come near you in the field and that s not a great place to be when you are playing cricket, Taylor had said before his fairytale 181* in the fourth ODI against England at Dunedin.

Taylor used to be New Zealand s most-feared batsman. Then the class of Williamson, the charisma of Brendon McCullum and Martin Guptill s sheer impact pushed him to the back seat. Taylor fell behind in the ranks as mid-2010s approached. The question lingered: was he past his prime?

McCullum s exit added to the woes of New Zealand s batting. Williamson, unlike his compatriots Virat Kohli, Joe Root and Steven Smith, did not enjoy the cushion of other power-packed players especially in the middle-order.

There is a story to that.

In the first Test of New Zealand s tour of Australia in 2015-16 at Brisbane, Williamson fought alone with a century and fifty. McCullum s run-a-ball 80 in the second innings was more of a last hurrah. Taylor got 0 and 26 as New Zealand lost. Prior to that, he had got 0 and 16 in the tour games.

Taylor was not seeing the ball. Adding to the misery was the pace of Mitchell Starc, Mitchell Johnson and Josh Hazlewood. A Brisbane optometrist prescribed him eye-drops. He responded with 290 at Perth. The game ended in a draw but Taylor had done enough to deflate Johnson s spirits as the fast bowler retired with figures of 3 for 177 in that Test.

Pretygium was the condition diagnosed. Taylor let his team know. The drops did not help him during the historic day-night Test. He struggled to spot it and got 16 against the Western Australians in the tour match. He played two brisk innings of 21 and 32 at Adelaide against the pink ball.

The class act that he was, the fading consistency was a concern that was beginning to hurt to the Kiwis. He struggled against Sri Lanka at home, then bulldozed the Zimbabweans. In fact, he averages 319 from the 4 Tests he has played against them. He was clueless in pacy South Africa, managing just 3 runs in the series. And his performance matched a tail-ender s when New Zealand toured India for 3 Tests.

Between his previous fifty-plus scores in Zimbabwe and the century against Pakistan, he scored 140 runs from 11 Test innings. It was faltering in the shorter format as well. He averaged 33.33 in ODIs in 2016 and his strike rate had fallen to 73.

That s when he decided it was enough. In late 2016, he had his eye operated.

Off to get my Pterygium removed pic.twitter.com/fVcFaVgME0

Seeing the ball swing from the hand, I hadn t been able to see that for two or three years. But you are still human, get good balls and play poor shots so hopefully I can eliminate that as well, Taylor added to what he said before going ballistic on Wednesday.

Taylor is certainly enjoying the form of his life. If his 95 at Mumbai against India earlier this season helped New Zealand go one up, his hundred in the first ODI of this series saw the hosts take a lead. That’s the difference. Bits-and-pieces cricketers like Colin de Grandhomme, Corey Anderson, Jimmy Neesham and others can do the job once in a while but for New Zealand to elevate to next level, they need another match-winner in the ranks, especially in the middle-order. Taylor is one, in both formats of the game.

Not many in the world of cricket boast of an average of higher 40s in both Tests and ODIs, especially in over a decade-long career. Taylor arrived in 2007 when the mass exodus in New Zealand s batting took place. He was the best thing to happen since the departure of the likes of Stephen Fleming, Nathan Astle and Craig McMillan.

Taylor averages over 48 in the longer format and is perhaps one of the finest in ODIs, boasting an average of 46.28. Despite that, discussions around New Zealand s greatest batsman typically revolve around Martin Crowe and Williamson.

Perhaps that has to do with his overseas record. His overseas batting average in Tests reads 41.9, compared to 56.7 at home. He has not gone past a score of 20 from 4 Tests in South Africa. In India he averages 25.46. He has scored runs in mid-30s in Bangladesh, UAE and West Indies, which obviously goes against him. However, Taylor 2.0 may go on to turn the tides.

Taylor is eyeing the 2019 World Cup, a trophy that has eluded New Zealand. He will be going to Nottinghamshire this English summer, which will certainly help him prepare better for the mega challenge next year. However, he does not want to put any expectations on the attainable numbers. He hopes to continue his happy run: I haven t put any expectation on centuries. If you bat well and get yourself in, that will take care of itself. 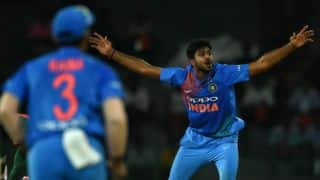